Travel: The Ancient Temples of Cambodia 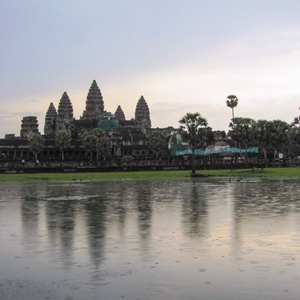 The long-lost world of Angkor Wat, which was the center of the Khmer kingdom, is a bewildering maze of temples, religious monuments, and palaces built out of sandstone, bricks, and laterite, bearing testimony to the architectural prowess of master builders.

For five hundred years till 1600 A.D., the Khmer was one of the greatest kingdoms of the world, and then the jungle took over. In 1863, explorer Henri Mouhot battled leopards and leeches to reach these magnificent ruins. Jayavarman VII, one of the kings of the Khmers, is said to have built the temple Ta Prohm “full of deep sympathy for the good of the world, so as to bestow on men the ambrosia of remedies to win them immortality.... By virtue of these good works would that I might rescue all those who are struggling in the ocean of existence.”

The Khmer Rouge and civil war slowed down restoration efforts and it was only from the 1990s that true restoration has succeeded. Landmines have been cleared, forests cut, and the collapsed structures painstakingly restored. Even today, Japanese, Indian, and German teams operating under a UNESCO committee are at work restoring the temples. Each one has their own methods: some believe in non-intervention, while some, like the Japanese, have used new sandstone to bolster the old structures.

Ochre villas, wide boulevards, tuk tuks with smog-belching motorcycles attached—Siem Reap, Cambodia, the gateway to Angkor Wat, is today a maze of resorts and hotels catering to the battery of tourists that throng this place. This great tourist onslaught has its downsides, though for a country as poor as this, tourist dollars are important. The hospitality industry is draining the underground reservoirs, there is a lot of damage to the ancient buildings, and illegal logging wreaks environmental damage. This country has battled political violence, crimes against humanity, and genocide. Today it battles poverty and corruption.

Our guide, Vin, was a victim of the Khmer Rouge atrocities himself. When he was a child his father was killed as he was a military officer. Vin spent many years in an orphanage and his mother lost all their property in the city. He studied to be a teacher, and today makes an excellent guide. What amazes me is the absence of rancor. He has just one dream: his children must experience the world in a better way, go abroad, and make new lives for themselves.

It’s a rainy day that gives us respite from the dreaded Cambodian sun. The 400-square-kilometer Angkor Park is actually a series of different capital cities of the Khmer empire between the 9th and the 15th centuries. The temples are not the only attraction here: there is also nature at its best—birds, monkeys, and snakes. Angkor Wat, the most sublime of all the Khmer temples, with its silvery moat filled with lilies, is a three-tiered pyramid topped with pineapple-shaped towers—a shrine to Vishnu by Suryavarman II, which was both the capital and the state temple. It is the most famous shrine here and even branded on the national flag. It is today the largest religious structure in the world, spread over 22 acres. 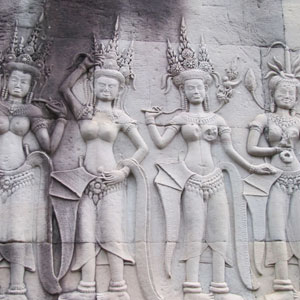 We look like ants with umbrellas as we walk along the long walkways with banisters carved with naga serpents, some of them broken. The Angkor Wat combines two features of Khmer temples—a pyramid and cascading galleries. Near the gopura is a tower with a gargantuan statue of Vishnu, which has been restored many times. Among the many bas-relief carvings on the outer walls, there is a unique apsara or celestial maiden revealing a full set of teeth—she is only one amongst 2000 or more apsaras at Angkor Wat! Over in the southern gallery are graphic images of the hells and heavens of Hindu mythology, drawn from the Ramayana and the Mahabharata. One of the most fascinating panels is the “churning of the sea of milk”—when gods and asuras churned the cosmic seas to produce the elixir of immortality. Asuras, nagas, apsaras, and a variety of marine life both real and mythical—this is a picture that we can gaze at for hours! There is the hall of a thousand Buddhas that had many statues destroyed by the Khmer Rouge during their Reign of Terror. The cascading towers represent Mount Meru, the mythical symbol of Hinduism that is supposed to be the centre of the universe. The perfect symmetry, the motifs, and the amazing architecture have us awestruck. We are even more amazed when we contemplate the realities: how did the people drag these gargantuan blocks up to form the cascading tiers of this temple? 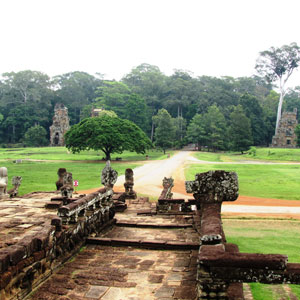 From Angkor Wat, we drive to the gates of Angkor Thom or great city, which was roughly four times the size of Angkor Wat and had over a million people in those days. We enter the walled city through the Victory Gate. We walk along the Elephant Terrace—the heart of Angkor Thom where royal receptions used to be held and the king could view his returning army as well as watch elephant fights. With elephants carrying lotuses in their trunks, naga (snake) railings, and garudas (eagles) carved into the sandstone, this is a majestic place. Close by is the Leper King Terrace, which owes its name to a statue of the God of Death or Yama found here, which had patches of lichen on it when it was found. It was given the name because of an old folk legend that one of the kings of Angkor was a leper. Today there is a copy of the original statue here; what is really the centerpiece are the hidden reliefs of the nagas and deities of the underworld, which were found during excavations. 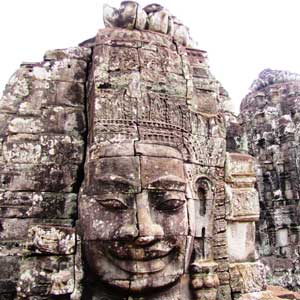 Bizarre Bayon is the central temple of Angkor Thom and a photographer’s dream. At first glance it looks like some random masonry. It’s a surreal mass of sphinx-like stone faces with downcast lids with a serene visage and an enigmatic smile set into a stone mountain of ascending peaks. The face is thought to be either of the King Jayavarman VII or the Lokeswara, the compassionate Buddha. The temple is extremely complex in terms of its structure and meaning, having passed through different religious phases. Our guide explains how when there was a change of king and religious beliefs, the statues used to be defaced or converted. This was because the city of Angkor Thom was so well fortified that later kings found it easier to re-model the Bayon, than remove it and rebuild their own new state temple! We see evidence of this in many places. Gargantuan Hindu gods made into Buddhas, Buddha statues converted to Hindu gods! King Jayavarman VII was one of the most prolific architects of the 12th century and he has even built the most remote of the Angkor shrines—Banteay Chhmar.

One of the special pleasures of the Bayon is to ramble through its maze-like structure. Narrow chambers, corridors and stairways give us surprise glimpses of the enigmatic faces. The bas-reliefs on the outer and inner walls of the Bayon have a wealth of images. Our guide points out a few to us: the Khmer battling their enemies the Chams (now the Vietnamese) on land and on water, corpses in the battle being thrown to the crocodiles, cock fighting, jugglers and wrestlers, a woman blowing a cooking fire—all a fascinating glimpse into life eons ago. As we climb the maze of faces, we are startled to see a real-life apsara with her troupe posing with tourists—for a fee, of course! 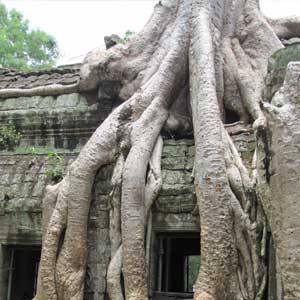 East of Angkor Thom is Ta Prohm, the most romantic temple that I have seen. Gigantic strangler fig and silk cotton trees threaten to engulf the temples in their viper-like grip. Gangly, sinewy roots are entwined with ancient sandstone blocks, sculptures, and pillars. Walls have been split and statues have been crushed by the gnarled branches. Restorers have intentionally left it that way, so that people can imagine how it would have looked lost in the jungle, many years ago—an eerie picture of a lost civilization, Amidst the sound of cicadas and bird calls, I find myself ruminating over the futility of human ambitions—what we build, the jungle can devour.

Our dreams of communing with ancient spirits are not to be. Today Ta Prohm is a touristy melee. Many Japanese tourists pose near the Tomb Raider temple—where Angelina Jolie battled the baddies as kick-ass archeologist Lara Croft. More than the grandeur of the temple, the movie connection seems to appeal to them!

The Indian connection is the leitmotif that entrances us: it was trade with India that gave the Khmers the influences of Hinduism and art and architecture. We see this everywhere—the Leper Terrace with a figure of Yama, the God of death, which proves that this used to be a cremation terrace, the figure of Airavata, Indra’s mount, on the entrance gate to Angkor Thom, dancing apsaras, the friezes of the Ramayana and the Mahabharata on the walls of Angkor Wat. There are also reminders of Cambodia’s more recent past everywhere. There is an orchestra that we see outside one of the temples with landmine victims playing some enthralling music. Most of the older population has stories of hardship etched on their faces. But almost everywhere we are followed by perky, bedraggled, bright-eyed kids with the refrain of “One dolaaar.” They vend postcards, T-shirts, trinkets, and soft drinks. I don’t think they go to school or have enough food to eat. But in their eyes I see a future for this country, a future that it richly deserves.

Kalpana Sunder is a Japanese language specialist and travel writer based in Chennai. Source: India Currents.