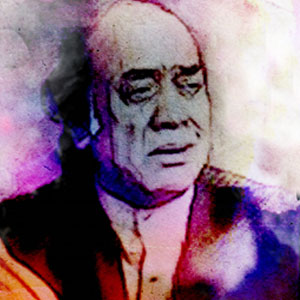 As a little girl growing up in Hyderabad, I looked forward to lazy Sunday afternoons when, after a hearty lunch, my family sat expectantly around a gramophone record player onto which my father carefully mounted a shining black vinyl 78 RPM disc to play music.

Within seconds of hearing the first sound, I invariably recognized the singing voice. My father wore a look of heavenly enrapturement while savoring the lyrics of the poem “Dekh tho dil ke jaan se uthtaa hai, ye dhuaaan sa kahaan se uthtaa hai” (Pray tell me whether this deep pain of separation [symbolized by dhuaan, meaning smoke], emanates from the heart or the soul?) while the rest of the family simply enjoyed the melody. When I heard the word dhuaan, I imagined sinuous contours of a make-believe white column of smoke rising out of the gramophone player and spiraling into space, painted by a weighty, emotion-laden voice with a fluid, silken texture.

It was the unmistakable voice of maestro Mehdi Hassan singing Urdu poems called ghazals. A ghazal is a collection of two-line couplets (Sher) sharing the same meter (Beher) and often is a poetic expression of unrequited love. First composed by 13th century poet Amir Khusro, they were popularized by singers such as Begum Akhtar, Farida Khanum, Ghulam Ali, Noor Jahan and Jagjit Singh, apart from Hassan, in the 20th century. Hassan could sing several genres of Hindustani music such as Dhrupad, Khayal, Thumri and Dadra, but he came to be best known for his specialized song delivery of Urdu ghazals.

Born in Luna village in Rajasthan in 1927, Hassan is said to have belonged to the 16th generation of musicians who practiced Dhrupad and Dhamar. Young Hassan was initiated into the art of singing when he was 6 years old by his father Ustad Azeem Khan. Apart from several hours of riyaaz (disciplined practice of music), his daily regimen included fitness exercises such as sit-ups that were meant to keep his respiratory system and body in good physical shape. “Gavaiyya bhi pehelwaan hota hai.” (A singer is also a body builder!)

During partition of the Indian subcontinent in 1947, Hassan’s family migrated to Pakistan. Hassan repaired engines at an auto shop to support a growing family. A fine aptitude for appreciating poetry, paired with powerful life experiences, shaped his ability to bring out “dard” (melancholic emotion) through the medium of ghazals. Each composition he sang was an intricate piece of aesthetic work, the couplets carefully strung together to create a tapestry of touching lyrics and rich sound. Many compositions stand out as glistening jewels, “Ranjish hi sahi, dil hi dukhaane ke liye aa” (Be it for the purpose of making a complaint, but please come back into my life even if it is to cause me pain) being a famous one authored by poet Mir.

In 1978, on the invitation of Prime-Minister-cum-poet A.B. Vajpayee, Hassan visited India after a span of nearly 30 years to sing ghazals at his residence. Known for his humility and generosity and an enigmatic presence on-stage, Hassan had a reputation of being a simple and unassuming man off-stage. “I once requested Mehdiji to perform for a fund raiser to build an auditorium and he readily accepted, even though I did not have money to pay him,” says Mohan Hemmadi, a Hyderabad-based music organizer.

Ghazals authored by several eminent Urdu poets such as Faiz Ahmed Faiz, Mir Taqi Mir, Qateel Shifai, and Mirza Ghalib, among others, were a part of Hassan’s repertoire of compositions. The standard of poetry was always high and his superior diction helped communicate the essential ideas of the ghazals in a lucid manner. “I was given specialized training for pronouncing vowels in the proper manner by my teachers,” Hassan once shared in an interview on Pakistan TV. He was also a skilled harmonium player and could sing in many languages, such as Urdu, Hindi, Punjabi, and Pashto. What made Hassan stand out from other singers was his ability to magically make words come alive through the medium of ghazals.

A recent discovery of Hassan’s ghazals in the music collection of my teen-aged son’s iPod underscored the timeless appeal of Hassan’s music. My son did not understand a word of Urdu, but could sing several of Hassan’s compositions from memory. What was the secret to this interesting phenomenon? Padma Shri awardee Shri Ramakant Gundecha describes Hassan’s phraseby- phrase development of the ghazal as “very classical by temperament.” His skill at singing each phrase in many different ways till the various shades of meaning came out clear and strong was remarkable, as was his use of musical ornamentation such as meend, gamak, kan, and khatka in appropriate ways to enhance the effect of the lyrics. Little wonder that his songs were a potent amalgam of precision in sur, laya and dard marked by effortless delivery.

Life, as we all experience it, is at times chaotic, at times bewildering, and at other times joyful and peaceful. Deep inside each one of us is a thirst to hear an expression of our innermost desires, hopes, fears, and disappointments. When Hassan sang ghazals, he evoked the struggles and triumphs of human life in a manner that resonated powerfully with listeners of varied religious and cultural backgrounds.

With his passing on June 13, the curtains came down on Hassan’s brilliant musical career spanning five long decades and consisting of an estimated delivery of 20,000 songs. “Teri mehfil mein lekin hum na honge” was one ghazal that Hassan frequently sang at concerts. While he may not be physically present to grace mehfils, the music Mehdi Hassan left behind will be sure to provide solace to scores of music lovers in their darkest moments.