By Shuchita Rao and Tim Parrish 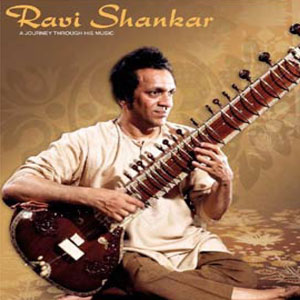 This soul-stirring sitarist, who passed away on December 11, 2012, at the ripe old age of 92, was an iconic figure representing the fusion of Indian influence on the golden era of American music, and a charismatic, colorful personality. But above all, he was a celebrated maestro of the sitar.

I was a young teenager, a student of Hindustani classical music, when I was once summoned to play the tanpura for a performance of Pandit Ravi Shankar’s orchestra ensemble at Ravindra Bharati, Hyderabad. The lights on stage were warm and subtle and there was a perfect sense of calm in the air. Panditji’s back was toward the audience as he faced us with a look of confidence glowing in his eyes. An electric spell slowly gripped us as his hands rose to guide us to sound our first note, “Om.” From that moment to the finish, the maestro deftly conducted movement to movement, like a surfer riding the crests and troughs of a gigantic wave. At times he exhorted and demanded and at other times he pacified and encouraged, bringing the best out of vocalists and instrumentalists on stage. At the end of the concert, amidst a thunderous ovation, he turned around to face the members of the audience. With a twinkle in his eye and a smile on his face he pointed at the orchestra and together, we took a deep bow, and exited the stage only to return for another round of applause.

What a charismatic presence Pandit Ravi Shankar had! He was out and out a people’s person. An unusually calm demeanor, a wry sense of humor and a genuine interest in the people whom he came to associate with were hallmarks of his personality. His jugalbandis with Ustad Ali Akbar Khan, the late sarod maestro, his musical equations with his percussionists, his partnerships with guitarist George Harrison, saxophonist John Coltrane, violinist Yehudi Menuhin, composer Philip Glass, flautist Jean Pierre Rampal, and orchestra conductors Andre Previn and Zubin Mehta were always about innovation and fair team play.

While his music was about peace and collaboration, his personal life seemed to suffer from a lack in harmony. His marriage to Annapoorna Devi, sur bahar player, daughter and disciple of his guru, the great Acharya Allaudin Khan, and his subsequent alliances with danseuse Kamala Das and New York concert producer Sue Jones did not end on happy notes. “There is so much in our music—the pain and struggle of life!” Pandit Ravi Shankar says in a documentary about his life. It seems that the turbulence he experienced in his private life helped him portray the pain and struggle of life through his music with great meaning. 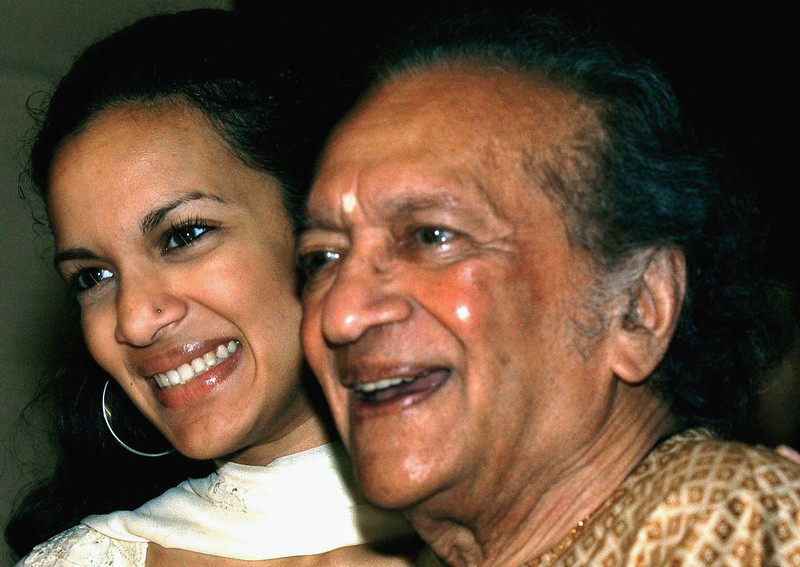 The highs of spontaneous romances, the lows of failed relationships, the grief of losing his young son Shubhendra from his first marriage, the pain of being denied meetings with his daughter Norah, the thrill of uniting in marriage with music lover Sukanya Rajan, the birth of his beautiful daughter Anoushka, who would later become the chosen one to carry forward his musical legacy, made him into a reflective musician. It empowered his music to come alive and paint myriad emotions.

Starting his artistic career as a dancer in his elder brother Uday Shankar’s dance troupe, Ravi Shankar was interested in several different things at the same time—painting, music, and dance. As a young man, he seemed to lack single-minded focus. When he met Acharya Allaudin Khan, the founder of Maihar gharana, he made a life-altering decision to dedicate his life to the pursuit of music. He learned for several long years, surrendering himself to music and to his guru, pursuing his passion with long and arduous hours of practice.

When Pandit Ravi Shankar came to the West, hard-nosed puritans in India dismissed him as a sitarist who strayed away from his roots and merely wanted to impress an audience who knew nothing of Indian classical music. The truth is that Pandit Ravi Shankar had a solid foundation in classical music and was an established master before he came to the West. “Contrary to what his detractors maintain, I believe that he stuck to the purity of his training that he received under his illustrious guru, Acharya Allauddin Khan; his devotion to his guru was impeccable. It would be a difficult task to pick one other musician whose contribution to classical Hindustani music can be compared with Panditji’s. Whether it is the love, admiration and respect he earned through a lifetime of dedication to music or his performances the world over, he was truly a musician par excellence,” says renowned flautist Nityanand Haldipur, belonging to the Maihar lineage and tradition.

A pure vegetarian and a staunch believer in God, Pandit Ravi Shankar had an obstinate streak to him. In the late 1990s, I attended one of his concerts at Symphony Hall in Boston. When he took his position on stage, he looked annoyed and declared that he would never come back to play in Boston. The concert organizers had not allowed him to light an incense stick to do a pooja before the concert. “If they cannot understand my need to connect to God through simple rituals, I cannot come back to perform in this city again,” he announced in front of a 2000-strong audience. True to his word, he never did.

Pandit Ravi Shankar’s music for films such as Anuradha, Godaan, Meera, the Apu trilogy, and Gandhi won him the love and admiration of many music lovers. Lilting melodies, subtle orchestration, and experimentation with changing rhythms to different movements within in a single song were all proof of his creative spirit. He was a widely recorded artist and performed the world over. 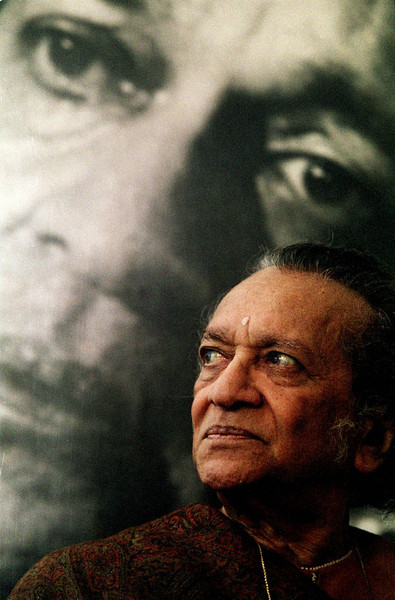 Ravi Shankar poses at his home in front of a photo of himself, March 6, 1998. (AP Photo/John McConnico)

Fulfilling his goals and passions with a dogged sense of determination, Pandit Ravi Shankar never seemed to take any day easy. Whether it was discovering old ragas, researching South Indian ragas or composing brand new ragas, he had a penchant for curiosity and was always busy with musical work. He performed till he was 90 years of age.

“Whether it was reaching out to the serious listener with a classic dhrupad-ang alaap, reciting dance jatis for the South Indian audience, engaging in layakaari (play with rhythm) for the adventure seeker in the audience, or dressing impeccably for the non-music-literate person who simply came to watch a famous performer, Panditji created an experience for everyone,” said dhrupad vocalist Padmashree Ramakant Gundecha.

Pandit Ravi Shankar was awarded more than 14 honorary doctorates from all over the world, including Harvard University and the New England Conservatory. The Indian government decorated him with the title of Bharat Ratna, its highest civilian award, and also appointed him a member of the Rajya Sabha. The Grammy awards committee has decided to posthumously present him with a lifetime achievement award in addition to the three Grammy awards that he won previously. As a global ambassador of Indian music, Pandit Ravi Shankar will remain immortal in the hearts of listeners all over the world through his music.

Part 2:
An Antidote to the Angst of the Vietnam Era

The legendary sitarist’s peace-inducing music was a refreshing change from the mood and music of the sixties. 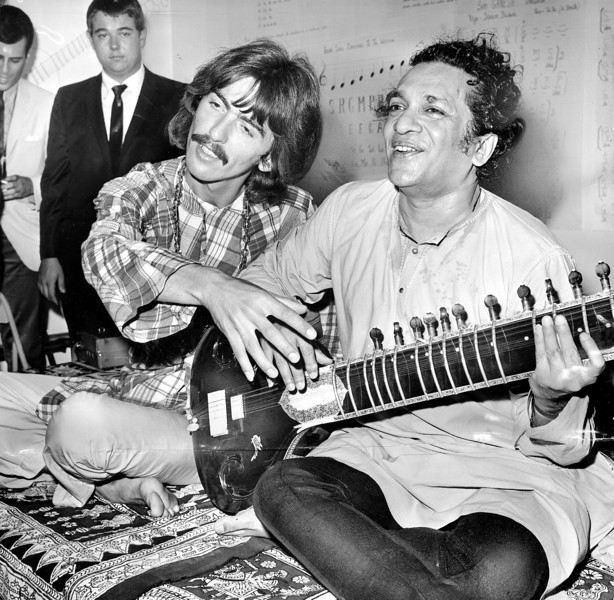 As a product of the 1960s, I can attest that the music scene was exploding across America. But something else was exploding, carrying with it death and destruction. Bombs were exploding in Vietnam, Cambodia, and Laos.

Meanwhile in American cities and college campuses, emotions were exploding. America was seeing inflamed anger and virulent attitudes on a scale it had never seen before. Scenes of body bags being taken off planes—body bags that figuratively were us—were viewed with anger, respect, and profound sadness.

It was also a time when American rock and roll bands were taking off like jets, soon followed by their British cousins. It was the era of The Beatles and the Rolling Stones. Some of the extreme music of the era reflected the growing tension that the nation was going through. It is precisely why Ravi Shankar, whose music was an oasis of peace in those times of turmoil, was such a music hero of mine. At a time when the reigning music often characterized hypersensitivity, upheaval, and disturbance, Shankar’s sitar strings struck a distinct chord of peace and hope.

Most music lovers knew of Shankar from his work with The Beatles. As more and more people discovered this special man and his sitar, they discovered something else. There was no tension, death, or destruction in this man’s music.

Perhaps with a few exceptions, the reigning bands and performers were all about their own music and performance. But not Ravi Shankar. Like me, many white American youngsters discovered that Shankar was about peace, tranquility, and self-reflection. His music soothed our troubled hearts and souls. He spoke to us through gentle words, with penetrating eyes, and melodies that could transport us to another place and time away from the madness of Vietnam and America’s social problems. His music was not about volume or thumping throbbing bass sounds, a companied by drums, cymbals, and a screaming guitar.

Shankar’s music carried a sense of peace that could help us deal with the death of soldiers, announced on the nightly national newscasts. It evoked strong feelings of melancholy and a nagging desire for calm and stability in America. I secretly wanted his music to be played to those in charge of the Vietnam War, with the hope that it would evoke in them a sense of the guilt and shame they so deserved. During this time when I would see a film clip of Shankar on television, it was challenging to watch him play such an amazing instrument while at the same time fighting off the urge to close my eyes and listen…just listen.

He was not afraid to speak up about what troubled him, and the excesses of American life troubled him. He was genuinely bothered by the lack of appreciation and respect Americans had for material possessions, including their musical instruments. He once said, “In our culture we have such respect for musical instruments, they are like God.” After watching film clips of Woodstock where musicians trashed their instruments, his sentiments are understandable. American musicians could have learned much from Ravi Shankar.

During those years I wonder how many college students, social activists, war protesters, and draft resisters returned to their homes, apartments, or dorm rooms after a day of protests or confrontations and put one of Ravi Shankar’s albums on the turntable—seeking to achieve inner peace through his music.

It provided a welcome respite from the battles with authority figures determined to silence the opposition. And in its own way, it renewed the strength and energy needed for the next day. All of this was made possible by the incredible talent of a single musician, a performer and thinker, and a man who very quietly and without fanfare brought his peace to us through his music.