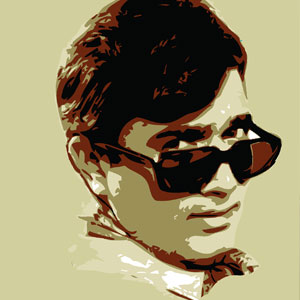 When a reporter pointed to a sketch of the actor on his office wall, the stalwart—way past his prime—responded, “Woh Rajesh Khanna hai. That’s not my picture.”

The reaction epitomizes almost everything about the man: his career, its impact, and his outlook. At his peak, which lasted just five years from 1969 to 1974, the actor packed so much nail and powder that the aftermath from that Khanna bang is still being felt. As a good father who was keeping his twins entertained and, at the same time, exposing them to old Hindi music, I kept playing clip after clip that barely got their attention, till I played the song where a young black-capped man cavorts and rollicks precariously close to the edge of a moving Jeep, trying to woo a pretty-dimpled woman on a train. “I like him,” said one of my girls, and after that I couldn’t stop them from requesting that ‘train song,’ often twice a night.

Kaka, as he was lovingly called, with his engaging smile, rakish head tilt, idiosyncratic tics, and drawl in his delivery, grew immensely likeable, served by what he was not; he didn’t flex his muscles or dance like a dervish or load his dialogues with depth or baritone. But he could portray vulnerability when alive and strength in death; he could voice Babumoshai through a gramophone and get his viewers to weep inconsolably; he could sing almost an entire song lying on the lap of a woman and sustain his audience.

No wonder Rajesh Khanna was, in Javed Akhtar’s words, a one-horse race, delivering a record 15 consecutive blockbusters; no wonder the BBC in 1973 called him a star “with the arrogance of Napoleon”; and no wonder scores named their sons Rajesh, women professed their love in blood, married his photographs, embellished his cars with lipstick, and broke down on learning of his wedding in 1973 to teenager Dimple Kapadia. Interestingly, that was the year he saw the last rays of superstardom; he would soon be eclipsed by Amitabh Bachchan who looked different, spewed aggression, and spoke with fire, a sign that the taste of Indian audiences was shifting. It didn’t help that Khanna indulged in some ill-advised movies like Mehbooba and Bundal Baaz and failed to adjust to the plunge that was ensuing as quickly as his rise. Surrounded by fair-weather friends, unwilling to accept changing public perceptions and acknowledge that the horse race at the top was filling up with other competitors, he soon took to alcohol.

Later, in an interview, he acknowledged that he was unprepared for the spectacular ascent and burden of being coined India’s first superstar, and equally disoriented by the premature climax, the fall from being the indomitable Rajesh Khanna in the sketch on his office wall to the Rajesh Khanna no one fawned over. He joined politics in 1991 and, on a Congress election ticket, almost beat BJP’s L.K. Advani for the New Delhi constituency. An interesting sidebar was the report that Khanna’s Congress Party nomination was put forth to needle Amitabh Bachchan, who had parted ways with Rajiv Gandhi after the Bofors hullabaloo. Disheartened by some developments with which he couldn’t reconcile, Khanna left politics in 1996. “I have a big regret and grudge—the only one I had against him,” said Sharmila Tagore, one of his most popular co-stars. “He should have acted more and not joined politics. He was my age and had a long career ahead of him. He could have gone on to act like Amitabh Bachchan has.”

Most of us relish good, lasting memories; I wished Zeenat Aman hadn’t come back in a dud called Boom in 2003, when my lasting impressions of a woman with jaw-dropping sensuality and grace was jolted by one with sagging eyelids and a pretentious bearing. It was with similar distress that I watched Khanna earlier this year in a recent Havells ad where he promotes their fans, masquerading as the Khanna of yore, attempting to flash old mannerisms, except that they seemed much more affected, his voice unrecognizable and personality just a caricature of my memories.

Regardless of how he fiddled with fading stardom, those few years of manic craze and aura will continue to delineate the legacy of a man born as Jatin Khanna, his death just a reminder, a little nudge to all those who are distracted. My father introduced me to the songs—those that were hits well before I was born—that have remained etched in my mind (my favorites, Jeevan se bhari and Woh sham kuchh ajeeb thi), and now, with technology at our fingertips, I’m doing the same with my girls, immortalizing the man, his numbers, and the realistic lip-synching that Tagore had fallen in love with. Like most actors who saw things fall seamlessly in place, Khanna, selected in 1965 in a talent hunt organized by Filmfare, was also lucky; his movies had unforgettable songs, powerful (and attractive) heroines who knew how to revel in their roles, and of course, he had Kishore Kumar and R. D. Burman. With a little luck, a calm confidence that came from his inherent shyness, the shedding of unwanted loudness, and with a disposition of a man that, Bachchan remarked, “girls would want to take home to Mother,” Khanna soared to heights unimagined in the Indian film industry. Script writers said it, the critics jotted it down, producers and directors acknowledged it, and so did the co-stars. Writer Salim Khan wrote, “Nobody could come anywhere near him; he was loved and adored by all from six to 60.”

In the twilight of his life, his old friends and soul mates seemed to return to him. Anju Mahendru, former fashion designer and actor, whom he fell in love with in 1966 and dated for seven years, returned to Kaka during his final years. Even his estranged wife, Dimple Kapadia, buried their disagreeable past and chose to be supportive of the former star. “He lived a lonely life,” said actress Hema Malini, “although it was good to see his family rally around him while he was unwell.” With those he pushed away now beside him in death, I see a contented Rajesh Khanna, that fleeting spark in his eyes, tilt his head and say, “Maut tu ek kavita hai. Mujhse ek kavita ka vada hai, milegi mujhko.”