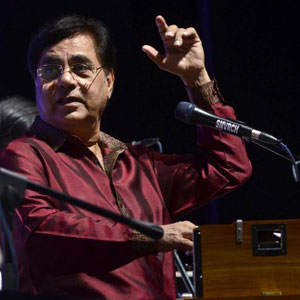 Jagjit Singh’s silken, sonorous voice, which touched the hearts of music lovers and brought solace to millions, sank into silence when he passed away from brain hemorrhage in Mumbai, India, on October 11. His music transcended borders and became popular not just in India but also with international audiences in countries like Pakistan, Australia, and U.S.A. Grief at his demise echoed from several corners of the world in postings on social media. SHUCHITA RAO remembers his life.

The first time I heard Jagjit Singh’s voice was when All India Radio broadcast his popular ghazal “Baat niklegi tho phir door talak jayegi” in the early 1990s. I was too young to fully understand the lyrics at that time, but his songs stirred emotive images in my mind. When he sang the word dooo…ooor and held it steady, perched on a high musical note for more than a few seconds, I could envision a long, narrow road stretching endlessly between barren, deserted plains. Through my years in school, college and later at university, I discovered that his magical voice struck a chord with young and old alike. His songs created an atmosphere of peace and tranquility and had a haunting, almost hypnotic quality to them.

Born in Sri Ganganagar in Rajasthan on February 8, 1941, Singh received training in Hindustani classical music from Pandit Chaganlal Sharma and Ustad Jamaal Khan of the Sainia gharana. He developed an understanding of the dhrupad, khyaal and thumri genres but preferred to make genres such as Urdu ghazals, Hindi geet, Sanskrit bhajans, Punjabi tappe and shabads as the chosen medium for communicating the power and beauty of his unique voice.

Singh obtained a post-graduate degree in history from Kurukshetra University and it is said that his father would have liked him to join the Indian Administrative Service. He, however, chose to build a career in music instead, and succeeded in carving a niche for himself in ghazal singing. He received the prestigious Padma Bhushan award from the Government of India in 2003.

In 1965, Singh moved to Mumbai to pursue his dream of establishing himself as a singer. He met and married Chitra, a talented singer, two years later. The couple who had started their careers singing advertisement jingles for the radio came to be recognized as a highly successful husband-wife performer duo. Their golden voices seemed to mingle like two separate streams converging to form a single flowing river, and in the process creating memorable duets such as “Yeh dolat bhi laye lo, yeh shorat bhi laye lo.” They gave public performances and released numerous music albums, such as A Sound Affair, Ecstasies, and Passion. Together, they recorded songs for more than three dozen Hindi films. Their combination album on HMV, comprising music from the films Arth and Saath Saath, holds the record of being India’s largest selling album of all times. Filmmaker Mahesh Bhatt said, “My film Arth would not have touched the hearts of millions of people without the contribution of Jagjit Singh.”

Singh was clearly a trendsetter as far as ghazal singing was concerned. He chose simple lyrics authored by renowned poets such as Mirza Ghalib, Qateel Shifai, Firaq Gorakhpuri, Sudarshan Faakir, and contemporary poets such as Kaifi Azmi, Gulzar, Faiz Ratlami, and Nazir Bakri. His predecessors Begum Akhtar, Mehdi Hassan, and Ghulam Ali had sung ghazals with lyrics that were hard to understand to those lacking fluency in Urdu. Singh succeeded in making the ghazal, which had hitherto been confined to elite mehfils, accessible to the common man. He sang in several languages other than Urdu, such as Punjabi, Hindi, Bengali, Gujarati, Sindhi, and Nepali. His singing reflected command over sur, laya, bhaava, and diction. His songs for TV serials such as Mirza Ghalib and Kahkashan are testimony to his superior intonation skills. As a mark of his respect for pure classical music he never used electronic instruments in his live stage performances. Singh also composed music for former Indian prime minister Atal Bihari Vajpayee’s Hindi poems.

While Singh’s fame steadily grew over five decades, some aficionados of classical music maintain that unlike maestros like Mehdi Hassan and Ghulam Ali, Singh could not prove his mettle and caliber as a classical musician. Some of them felt that his handling of ragas in ghazals was largely light. Some music lovers felt that the initial spark created in the first few LP recordings released in the 1970s slowly lost their glow over time. Jayashree Shahane, a ghazal connoisseur and singer from Boston, says, “While I have been a fan of Jagjit and Chitra since a long time, I found that the magic created in their LP album The Unforgettables never quite re-appeared in their later album releases.”

Purists may have squabbled over whether he lacked classical depth, but nobody who heard him could deny his power to stir emotions. Through his music, Singh brought to life myriad human emotions like few others could. While his Punjabi folk songs carried an earthy zest and created an atmosphere of joy, his ghazals dealing with themes of separation evoked sorrow and brought tears to the eyes of listeners.

He suffered a significant personal loss when his only son Vivek died in a road accident in 1990. His health declined after a heart attack in 1998. His musical repertoire in his later years expanded to include devotional songs such as Kabir’s dohe, bhajans, shabads, and keertans. He became a philanthropist and performed for charities. On October 9, Singh was to sing for his fifth charity concert for the NGO Alert India, an association for leprosy education, rehabilitation, and treatment. But death came, snatching him from his innumerable fans. His stirring, soulful music will however remain etched in the hearts of millions of music lovers for a long time.

[Shuchita Rao is a Hindustani vocalist from Boston, Massachusetts. She enjoys freelancing on subjects related to Indian music, art and culture.]