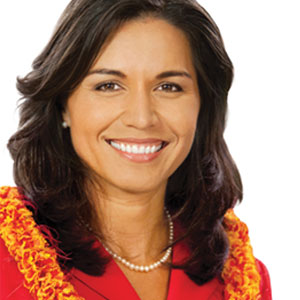 The first Hindu American in Congress may well be the best ambassador for Hindus in America.

Thirty-one-year-old Iraq war veteran Tulsi Gabbard created history by being the first Hindu American in Congress. She will take her oath on the Bhagavad Gita.

Gabbard signifies the kind of change that is coming to Congress willy-nilly. There could be some resistance from a Congress that is married to tradition. In fact, the last time a Hindu prayer was attempted in Congress, fanatics from Operation Save America/Operation Rescue loudly interrupted it.

Gabbard defeated K. Crowley of the Republican Party with a solid margin in Hawaii’s second Congressional district. And Crowley was mean-spirited enough to fume that Gabbard’s religion “was incompatible with the Constitution.”

The US military is obviously a lot more diverse than Congress and Gabbard retorted to Crowley via The Huffington Post, declaring: “It is stunning that some people in Congress would so arrogantly thumb their nose at the Bill of Rights. When I volunteered to put my life on the line in defense of our country, no one asked me what my religion was.”

Undoubtedly, India has far more religious diversity in Parliament than does the US Congress. ABC News applauded Tulsi Gabbard’s march to Congress while putting the electoral victory of the first Hindu American Congresswoman in context. “For a country whose founding principles include religious freedom, the American government has a history of being almost homogenous with respect to religion. For most federal representatives, the question isn’t whether or not you’re Christian but what Christian denomination you follow,” said ABC News.

“But just as leaders have broken racial and gender barriers over the years, so, too, are non-Christian candidates moving forward,” it added.

Proud of her Hindu religion, Gabbard is not Indian. She was born in American Samoa to a Catholic father (Hawaii State Senator Mike Gabbard) and a Hindu mother. She moved to Hawaii when she was two and embraced Hinduism as a teenager and is well-versed in the scriptures.

Gabbard says her faith will be an asset in Congress, where she hopes to work on war veterans’ affairs, environmental issues, and cultivating a closer relationship between US and India.

“It is clear that there needs to be a closer working relationship between the United States and India. How can we have a close relationship if decision-makers in Washington know very little, if anything, about the religious beliefs, values, and practices of India’s 800 million Hindus?” Gabbard told The Huffington Post.

In a statement released after her victory, Gabbard acknowledged that her election would be an inspiration to Hindus across America who feel diffident about having a different religion. “On my last trip to the mainland, I met a man who told me that his teenage daughter felt embarrassed about her faith, but after meeting me, she’s no longer feeling that way,” Gabbard said.

“He was so happy that my being elected to Congress would give hope to hundreds and thousands of young Hindus in America, that they can be open about their faith and even run for office, without fear of being discriminated against or attacked because of their religion.”

It is hardly a secret that non-Christian candidates find it difficult to move forward in US politics. For whatever reason, the two highest-profile Indian-American politicians are both Republicans and converts to Christianity: Louisiana Governor Bobby Jindal was raised Hindu, while South Carolina Governor Nikki Haley was raised Sikh.

“If we are uneasy with Bobby Jindal, it is not because we’re a nation of racists, it’s because we are observing a man who seems to be uneasy with his own race,” wrote The Daily Beast’s Keshni Kashyap. “While it hasn’t stopped him from taking campaign money from South Asians—I attended an Indian-sponsored fund-raiser in Los Angeles some years ago when he was running for governor for the first time—Jindal has downplayed his ethnic background throughout his political life. He changed his Indian name during childhood and, against his father’s wishes, he converted from Hinduism to Christianity. When the New Orleans Times-Picayune tried to go to India to cover his Punjabi roots, his family did not cooperate,” she added.

What is admirable about the 2012 elections is that it brings a multitude of interesting firsts for women in Congress. At least 20 women will serve in the Senate and at least 76 in the House. We will see the first Asian-American woman in the Senate, and the first Hindu-American in Congress.