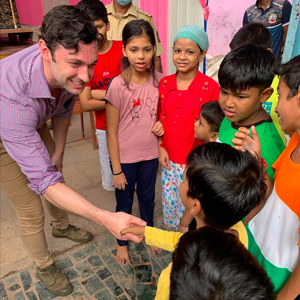 From meeting the residents of Dharavi, Mumbai’s largest slum, to interacting with students at Jai Hind College, to meeting the top echelons of corporate and government leaders, the senator’s first official visit to India was far-ranging. In a video interview with Khabar, he shares some of his thoughts about the visit. 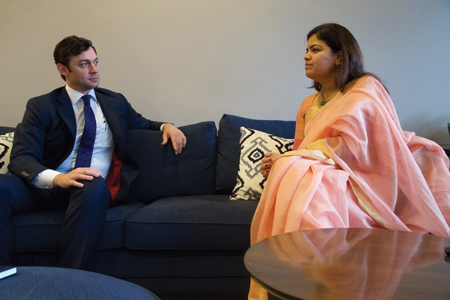 ​When asked what his favorite memory was that stood out from his recent trip to India, United States senator from Georgia, Jon Ossoff, recalled his visit to the storied Siddhi Vinayak Temple in Mumbai. He said he enjoyed “bonding and celebrating with the community” during the festive occasion of Ganesh Chaturthi.

The Senator was also awed by the “extraordinary resilience and innovation” of the industrious people of Dharavi, the largest slum in Mumbai, which is home to a multitude of cottage industries, including the flourishing leather goods trade.

“I chose to lead this delegation to India because of how highly I value my friendships in the Indian American community and all that it does for Georgia,” said Ossoff about his weeklong official trip that started on August 30. “I spent quality time with people and communities in many different parts of India’s diverse society,” said the Senator. “India’s diversity is extraordinary. One of the reasons that the U.S. and India should be natural partners is that both countries have, at our core, commitments to pluralism and tolerance,” he added.

Talking about sectors that are particularly well-suited for collaboration between Georgia and India, Ossoff cited energy, battery technology, automotive, aerospace, research and development, and agriculture. “While 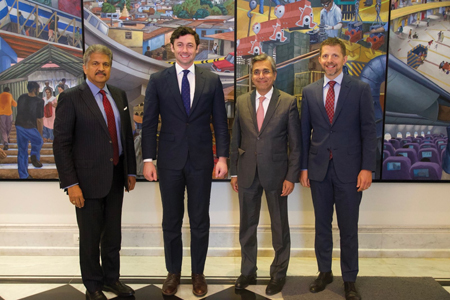 in India, I made a strong case that Georgia farmers who grow pecans would benefit by collaboration with Indians, and Indians would also benefit if Georgia farmers enjoyed greater access to the Indian market,” he said. He also highlighted his interest “in building partnerships between research and technical institutions in Georgia and colleges and universities in India.”

In reference to “the ease of doing business” between the two nations, Ossoff cited bureaucratic issues that “cut both ways.” “US is right now struggling to process the visas for many applying at our embassy and consulates in India. So, I think that both countries can streamline and improve governmental operations to support trade and business,” he elaborated.

When asked to compare India with China as a global destination for multinational corporations, Ossoff said, “India is a market economy where intellectual property rights are much stronger. And the state plays less of a dictatorial role in the economy. As I mentioned earlier, India and the U.S. share a political heritage of openness, tolerance, and pluralism which forms the basis for strong commercial as well as cultural and security relationships.” 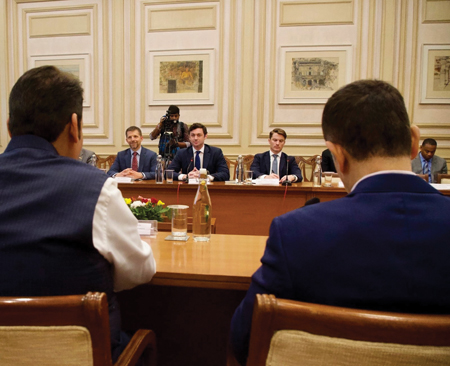 Following are some highlights from his India visit: