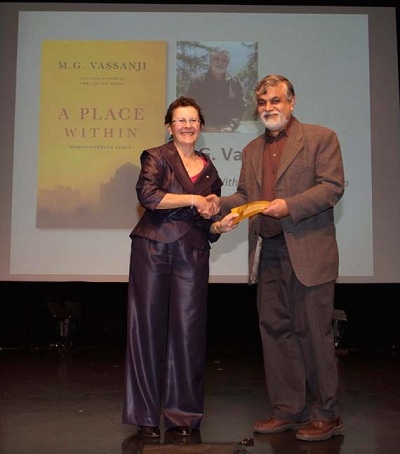 Moyez Gulamhussein Vassanji has no use for purity. He prefers to be known as M.G. Vassanji.
This widely praised author’s life is, in fact, a celebration of impurity—as characterized by “a complex ethno-cultural identity” that incorporates multiple countries (Kenya, Tanzania, India, Canada, U.S.A.), religions (crucially, the syncretic bhakti tradition he was raised in), languages (Gujarati, English, Swahili, Hindi), and even professions (nuclear physicist, award-winning novelist).

Vassanji could never accept the rigidity others tried to impose on him. “It seems impossible to do that because I was neither Hindu nor Muslim,” he said. “Or I considered myself both. So starting from there, it becomes Indian and African and Canadian. There is no contradiction; they’re all part of me. In the old days, people said you had to choose; you’re either this or that. I think it’s false because you usually can’t. You cannot forget your childhood, or you cannot forget the language you grew up with. You cannot erase your ancestral memories. They’re all part of what you are.”

It wasn’t just in the old days, though, that Vassanji had to grapple with such dilemmas. He deals with them head on in his fiction and in a travelogue called A Place Within: Rediscovering India (Anchor Canada), his only nonfiction book so far. Few Canadian authors of Indian or South Asian descent can match the stature of M.G. Vassanji, who is in the same league as Rohinton Mistry and Michael Ondaatje. Vassanji won a regional Commonwealth Writers Prize for The Gunny Sack, his debut collection of short stories, but that was merely a start. He bagged the inaugural Giller Prize in 1994 for The Book of Secrets, and went on to win it again in 2003 for The In-Between World of Vikram Lall. Alice Munro is the only other author to receive this prestigious Canadian award twice. Vassanji’s other books include The Assassin’s Song, Amriika, When She Was Queen, Uhuru Street and No New Land.

So how did he make such a successful transition from nuclear physics to novel writing? “Writing was just a compulsion, it was a need,” he declared. “I would have done it anyway, one way or the other.” Born in Kenya, Vassanji was raised in Tanzania but went back to Nairobi for his university studies, until he won a scholarship to the United States, where he attended MIT and eventually got his Ph.D. from the University of Pennsylvania. It was during his stint as a research associate at the University of Toronto, from 1980 to 1989, that Vassanji explored—and found success in—the literary world. He promptly abandoned one rarefied field for another.

Speaking of India, which Vassanji didn’t visit till 1993, what led him to write this travelogue? “Our culture was Asian, partly African, but mostly Asian in terms of the languages we spoke,” he said. “We ate Indian food and went to Indian movies. Our cultural entity was Indian. And even in Africa we were identified like that.”

But though people like him were called Wahindi (i.e., Indians) in Africa, Vassanji was shocked—and distressed—to realize that it was more complicated in India.

“I always cringe at the terms ‘Hindu’ and ‘Muslim’; they are so final, so unequivocal,” he notes in the book, adding, “For ‘Hindu’—itself derived not from the name of a founder, as ‘Christian’ is, or a philosophy or attitude (of submission), as ‘Muslim’ is, but from a geographical marker, the river Indus—I often substitute ‘Indian,’ for India’s primary identity is rooted in its ancient history and culture, which preceded these religious divisions.”

Yet despite—or perhaps because of— these challenges, Vassanji took pains to explore India properly, crisscrossing it from Himachal Pradesh and Punjab in the north to Kerala in the south, and from Orissa and West Bengal in the east to Gujarat in the west, where his ancestors belonged to the Khoja community of the Kathiawar peninsula. Unusually, the book is based on about 10 trips made over a span of 15 years. While that period coincided with India’s rise as an economic power, allowing Vassanji to make shrewd observations about the changes taking place, didn’t he have a problem with the structure? How was he able to avoid disjointedness, and how did he remember all his experiences? Why, in other words, did he wait so long to write this book?

“I’ve always taken notebooks with me,” he said. “In fact, I took a camera only on my last trip. But it was hard to write after my first trip, or after two trips. I tried it. Many people can do it, but I couldn’t. It was only 10 years later that I found the right approach and tone. The problem, of course, was to incorporate all the changes that had taken place while I was going back and forth. I’ve done that within the narrative and I put little chapters at the end for each area. These postscripts were written on my latest trips.”

The narrative isn’t totally seamless, and at times it reads as if several books have been shoehorned into one. But it does work at multiple levels, with varying degrees of success, as a conventional travelogue, an exploration of roots, a spiritual journey and a historical inquiry. Vassanji stayed in cities, villages, even a hill station, visited monuments and shrines, and traveled mostly by train, which for him is the best mode of transportation in India. In some ways, his first Indian train journey—a 30-hour, 900-mile ride from the west to east—made the deepest impression, and the book is actually dedicated to his “friends of the Puri Express.” Everywhere he went, Vassanji mingled with people, including writers, and he gives us crisp glimpses of Mulk Raj Anand, Khushwant Singh, K. Ayyappa Paniker and Bhishm Sahni, among others.

“His characters come alive, his depictions of rural landscapes, congested cities and squalor become personal experiences,” according to Khushwant Singh in The Telegraph. “A Place Within: Rediscovering India makes more absorbing reading than Jawaharlal Nehru’s Discovery of India because it is, in fact, a rediscovery, and written by one who wields a gifted pen.”

Vassanji’s links to the South Asian literary world run deep: he co-founded The Toronto South Asian Review, later called The Toronto Review of Contemporary Writing Abroad. How, then, did he view the diaspora’s much-heralded blossoming of Indian writing in English? Vassanji is not convinced that it represented the ‘real’ India. “You got upper-middle-class stories, but not the heart and soul of India,” he said. “Those [real] stories are told in Gujarati, Hindi, Malayalam. You didn’t get a good Indian representation because of a lack of good translations.”

Indian cinema has been another long-standing interest for Vassanji. “Hindi films were a big link to India,” he pointed out. “People would see the same movie six or seven times; it was a big obsession. In those days, they were social dramas rather than song-and-dance or pornography. You actually saw family values that at least my mother tried to instill in us.” One film that made a strong impression on him was Mother India.

There are numerous telling moments in the book—as when Vassanji and his wife, reminded of their East African childhood by the Indian landscape, are overcome with emotion. But even more than the place, some of the personalities they encounter have a lasting effect on Vassanji. A good example is his lovingly described friendship with the late Sahnis, whom he respectfully refers to as Bhishm-ji (author of the novel Tamas) and Sheila-ji. On one occasion, not knowing that Vassanji could hear her, Sheila-ji says, “He’s such a good Muslim!”

“That pricks,” Vassanji writes. “I always thought of her simply as Sheila-ji.”

Such bittersweet moments are emblematic of Vassanji’s complicated relationship with India. “I imagined India as my ancestral homeland; to witness, upon my arrival, its divisions running so deep was profoundly unsettling,” he writes in an earlier, poignant section. “It was to be asked to carry an open wound where perhaps only an itch had existed; to accept difference at the profoundest level. There was a prevalent tendency, I found, to essentialize—and therefore, in a certain way, to exclude.”

As he said in the interview, “Some kind of ideological shift took place in the late 19th century, and intensified in the late 20th century, to my personal disappointment, because it’s denying your roots.” Which brings us to the final question: Why was Vassanji so drawn to India, a country that his grandparents left long ago—and why, despite the “disappointment” is he still attached to it?

Vassanji explained how, as a youngster in East Africa, he and his peers looked up to Europe rather than India. However, as soon as he came to America, there was a need to know his Indian-ness. “Before that, it was implicit,” he said. “We had a teenager’s attitude towards the parent’s culture. Once you’re out of it, there was the whole threat of losing it.”

And then, several years later, Vassanji went to India after his first book was published there.

“That obsession came about because of my trip,” he said. “Every trip became an intense engagement. It surprised me. I hadn’t thought I’d engage so closely with the place. I still identify with Africa, but I didn’t think I’d identify with India so closely. It was a shock for me, but also pleasing in a sense because I discovered something new in my life. That was the rediscovery part of it. It was there, and I couldn’t wish it away.”

Vassanji and Naipaul: A Case of Contrasts

Among literary practitioners of the old diaspora—to use a label for the descendants of Indians who migrated in the late 19th and early 20th centuries—M.G. Vassanji and Nobel laureate V.S. Naipaul belong in the front rank. But as esteemed as they are for their tales set in Africa (and also Trinidad, in Naipaul’s case), the two authors are notable more for their differences than similarities, especially when it comes to India. In his Indian trilogy, Naipaul angered not-a-few readers with his scathing observations and analysis. Vassanji seems quite gentle in comparison.

“V.S. Naipaul came from a different, older generation than mine,” Vassanji said. “He left the Caribbean before they got independence. So they were much more detached—they could not go back to India. But our parents could go back. The Asian culture was much closer to us, the identification easier. Also, I think we have different personalities. I don’t hold myself back and look at ‘them.’ I identified so closely [with India], which was the shocking part of my trip. I have so many close friends—some of my closest friends are in India.”

Ironically, though Vassanji grew up in East Africa, it is Naipaul—born and raised in the Caribbean—who has come out with a work of nonfiction about Africa. Titled The Masque of Africa: Glimpses of African Belief, it’s being released here this month by Knopf. What about Vassanji? Now that he has dealt with his ancestral homeland, maybe Vassanji will take on his native homeland in his second nonfiction book.