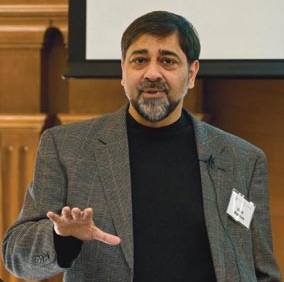 Former IT entrepreneur Vivek Wadhwa is now a Duke-based professor and researcher. He is perhaps best known for the battles he wages on behalf of immigrants. But while Wadhwa’s weapons of choice are ideas and words, which he deploys in a temperate rather than provocative manner, not everybody has been civil or has responded to his arguments rationally. His pro-immigrant articles in publications like Bloomberg Businessweek have led to a vicious backlash among diehard anti-immigrants, even attracting death threats. So how bad does it get? To show what Wadhwa is up against, and how he deals with it, here are some of his Twitter posts from a single day last month:

(1) Giving lunch keynote at Immigration Works conf. in Seattle. Guess what? (2) Speakers have received death-threat letters with bullets attached. What has happened to this country? (3) Dark clouds of nativism circling Washington, xenophobia on the rise. Just when we need world’s brightest here to innovate/create jobs. (4) I’ll admit, I was worried about coming here, but felt I had to. FBI and police are here. (5) Immigration debate is now so polarized that it’s about racism vs. patriotism, good vs. evil. Nothing in-between. (6) About to give my talk. Event has plain clothes security people everywhere.

If Wadhwa seems undeterred by such attacks, it’s surely because he has gathered enough evidence to passionately defend his view that, despite the current economic setbacks, increasing the number of highly skilled permanent residents would actually benefit the U.S. And here’s the other reason: Wadhwa has the courage to stand by his convictions.

Wadhwa, who is also a senior research associate at Harvard Law School, held top positions at CS First Boston and then went on to launch Relativity Technologies.

Apart from immigration, Wadhwa focuses on how the U.S. can make big gains by boosting entrepreneurship and by finding wider commercial use for the world-class research done at its universities. Entrepreneurship was the topic of his keynote address at the recent Regional TiE (The IndUS Entrepreneurs) Summit in Atlanta, where Wadhwa, the founding president of TiE-Carolinas, dwelled on the misconceptions many have about entrepreneurs. And he also touched on the attributes shared by successful entrepreneurs.

Following the talk, Wadhwa sat down with Khabar for a tête-à-tête.
In your keynote address, you noted that Indians dominate the Chinese when it comes to start-ups in this country. However, the reverse is true for patents. What do you think are the reasons?

You’ve a lot of Chinese researchers in American universities, and also, the Chinese government puts a premium on filing patents. Indians don’t care. They’re too busy starting companies after getting their master’s and Ph.D.s. Frankly I think companies are more important than patents: I’m not a big fan of patents. When you start a company, you take an idea and turn it into innovation.You’re innovating when you take an idea and transform it into a product. What entrepreneurship does is it lets you commercialize your ideas. And you build wealth, you build jobs—that’s what is most important.

Now you’re a strong proponent of immigration, and you support H1-B visas?

Yes, you did point it out [in the keynote address]. However, even when you talk about increasing the limits on green cards, the fact remains that there’s been a backlash against immigrants because of the grim unemployment situation. When millions of Americans cannot find jobs, how can we justify such policies?

Start-ups create jobs, and skilled immigrants start a disproportionate number of companies. What I’m saying is, bring in people who can create jobs. How is America going to get out of this recession? Through start-up activity. The vast majority of jobs created in America are through start-ups, so bring in the class that will create the jobs. That will make the pie bigger. Protection and xenophobia will only take us into the dark ages.

As a professor, what advice would you give to would-be or recent graduates who cannot find jobs? In this economic climate, what should they be doing to stand out and be noticed by employers?

They should do internships, whether paid or unpaid, and be very aggressive in positioning themselves. They have to get in front of people and start networking and prove their value. It’s all about networking.

What would you say to entrepreneurs?

For entrepreneurs, this is the best time to start a company. Bootstrapping is the way to go; it’s a myth that venture capital is a prerequisite. Now there is less competition, it’s cheaper and there are so many unemployed people who will work with you for practically nothing.

You hold entrepreneurs in high esteem, and you were an entrepreneur yourself. But you gave it up to become a professor and researcher. Why?

I had a heart attack, because I burned myself out in the tech world. So if I had remained in the tech world, it could have led to another heart attack. Now I can stay intellectually busy and do the things that really excite me, but without the stress of running a company.

In India, as you know, a lot of kids are forced into professions for which they don’t have an aptitude, because that’s where the jobs are. It’s?

Exactly! But is it fair to tell our kids here to follow the same path?

However, for the kinds of skills America needs in order to be successful and stay ahead in the 21st century, STEM (Science, Technology, Engineering, Mathematics) is important, as you pointed out in a recent discussion.

STEM is important, but not everybody needs to be in STEM. We need marketing people also to run companies. But without doubt, we do need more Americans to get into science, technology, engineering and math. What needs to change is the incentive system. We need to provide more motivation, make STEM more sexy for them. And this needs to be done at an earlier stage. We need to make it cool to be an engineer, which it is not.

How can blue-collar workers thrive in our globalized world, where in order to suceed we need to be highly skilled? What do we say to the people who, for whatever reason, cannot be trained for these 21st-century jobs? If there’s no manufacturing, are they stuck in the service industry?

We need to retrain them for other jobs, provide vocational training in a field that interests them. A person working at Wal-Mart might be interested in becoming a computer technician or a radiologist or a nurse. America needs to rethink. We don’t invest in workforce training anymore. That needs to be fixed. In addition to unemployment insurance, provide them with six months of vocational scholarships.

You recently did research on the differences between successful women and men entrepreneurs. What did you find?

We found that, basically, though there is no difference between women and men entrepreneurs, women are discouraged from becoming entrepreneurs. They’re discriminated against when they go for funding, they don’t believe that they can become successful, they don’t get the encouragement and mentorship [that men receive]. So you have half the American population being left out of successful entrepreneurship.

You’ve noted that in India, surprisingly, you find a lot of women in high-level positions, especially in fields like banking and publishing.

India has its own problems, but they seem to be doing some things right in some sectors.

America doesn’t attract the best and bightest anymore, you said. Now they have other options, especially in China and India. But when it comes to India, your critics would argue that problems like poor infrastructure, corruption and political instability would continue to give America a big advantage for years to come.

There is no doubt about that. But the fact is that there are also great opportunities [in India] for them to fix the infrastructure, get into politics and remove corruption. When you come to America and don’t have a green card, you’re basically living as a second-class citizen. You may have an abusive boss at a third-rate company. And there are a lot of problems here too, like corruption and poverty. So you can be unhappy anywhere, or you can do well wherever you live. It’s a personal thing.