COVID-19  In-depth info for Indians in Atlanta/Georgia. Click here
Home > Magazine > Features > We Are All Muslims

We Are All Muslims 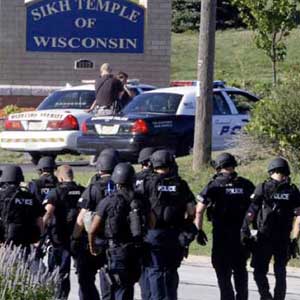 A Sikh response to the Wisconsin Gurdwara shootings.

I had just walked into a hotel lobby when I saw the words “shooting” and “Sikh temple” flashing on the screen of the TV. It felt like a punch in the stomach.

Sobbing in front of a computer screen in the hotel’s business center, I thought about how easily it could have been my parents’ or my brother’s gurdwara that was being attacked. I thought about how all gurdwaras are made up of my extended family members, and we were all targeted. I thought about all that our Sikh community in the U.S. has dealt with over the last 11 years—all the lives lost, from Balbir Singh Sodhi being shot dead in my hometown of Phoenix, Ariz., four days after Sept. 11, to the fatal shootings of Gurmej Singh and Surinder Singh while taking their evening walk in Elk Grove, Calif., last year—all the Sikh children tormented by bullying and harassment in schools on a daily basis, being called “Osama” or “raghead,” their turbans pulled off, just as mine was in fifth grade and on the New York City subway a few years ago.

It is widely believed that the targeting of Sikhs is a case of “mistaken identity,” Sikhs being mistaken for Muslims. Indeed, we are by and large attacked because of anti- Muslim bigotry. While we do not know whether Wade Michael Page’s act of terror in Oak Creek, Wis., was fueled more by Islamophobia than his general white supremacist ideology, most of us who experience harassment as Sikhs in the U.S. experience it through the vilification of Muslims or Arabs.

Ironically, even some Sikhs get caught up in vilifying Muslims or at least distancing themselves from the Muslim community at every possible opportunity. I remember in the days, weeks, and months after 9/11, the first thing out of the mouths of many Sikhs when talking to the press, politicians or even their neighbors was, “We are not Muslims.” While this is of course a fact, the implication of the statement, if it stops there, is: You’re attacking the wrong community. Don’t come after us, go after the Muslims! Sikhs believe in equality and freedom and love our country and our government. But Muslims? We don’t like them either.

The roots of anti-Muslim sentiment in the Sikh community run deep in South Asia, from the days of the tyranny of Mughal emperors such as Aurangzeb in the 17th century to the bloodshed in 1947 when our homeland of Punjab was sliced into two separate nation-states. Despite these historical realities, Sikhism has always been clear that neither Muslims as a people nor Islam as a religion were ever the enemy. Tyranny was the enemy. Oppression was the enemy. Sectarianism was the enemy. In fact, the Guru Granth Sahib, whose scriptures are the center of Sikh philosophy and devotion, contains the writings of Muslim (Sufi) saints alongside those of our own Sikh Gurus. Nevertheless, historical memory breeds misguided hostility and mistrust of Muslims, especially in the contemporary global context of ever-increasing, mainstream Islamophobia.

What is it going to take for Sikhs and Muslims, and for that matter, others to join together in solidarity against the common enemies of racial harassment and violence, racial and religious profiling, and Islamophobic bigotry? To bigots like Page, it matters little if one is a Muslim, Sikh, or Hindu. To them, even a sari- or salwar-kameez-wearing woman may be just the same as a turbaned and bearded man. We are all brown-skinned, all immigrants, all a threat to their distorted vision of America.

Perhaps the recently exposed NYPD spying program will serve as a wake up call about how bad things have really gotten. While we Sikhs confront bigotry on a daily basis from our neighbors, classmates, coworkers, employers, and strangers on the street, our Muslim American counterparts are systematically targeted by our own government. (I should note that, of course, Sikhs, too, are profiled by law enforcement in less repressive, though still troubling, ways, especially at airport security).

Sikhism was born hundreds of years ago in part to stand up for the most oppressed and to fight for the freedom and liberation of all people. If this isn’t reason enough for us to support the cause of rooting out Islamophobia from the law enforcement and government agencies, we only have to return to the bleak reality we Sikhs in the U.S. still face in 2012.

“We are not Muslims” hasn’t been so effective for our community, has it? As long as we live in a country (and world) where an entire community (in this case, Muslims) is targeted, spied on, and vilified, we will not be safe, we will not be free.

As Martin Luther King Jr. wrote in his letter from a Birmingham, Ala., jail in 1963, “Injustice anywhere is a threat to justice everywhere. We are caught in an inescapable network of mutuality, tied in a single garment of destiny.”

I hope the blatant assault on the civil rights of our Muslim sisters and brothers propels us Sikhs, as well as all people of conscience, to action. Perhaps “We are not Muslims” will become “We are all Muslims,” as we come together to eradicate Islamophobic bigotry in all its forms.

Sonny Singh is a musician and educator based in New York City.

Link:
"Urdu, Bengali speakers under police lens in New York." The Times of India.
PTI Aug 29, 2012, 02.09PM IST
http://articles.timesofindia.indiatimes.com/2012-08-29/us/33474924_1_urdu-potential-terrorist-plots-police-officials
NEW YORK: With memories of the 9/11 attacks etched in the psyche of New Yorkers, city police say they give particular attention to Urdu and Bengali speakers when they eavesdrop in restaurants and stores to gather information on terrorists.

"I'm seeing Urdu," assistant chief Galati said of the data generated by his eight-person demographics unit, which has eavesdropped on thousands of conversations between Muslims in restaurants and stores in New York City and New Jersey and on Long Island.

"I'm using that information for me to determine that this would be a kind of place that a terrorist would be comfortable in."

"A potential terrorist could hide in here," Galati was quoted as saying by the New York Times.

"Most Urdu speakers would be of concern." Nearly 80,000 New Yorkers, mostly of Pakistani and Indian descent, speak Urdu.

Galati said that those who speak Bengali would also get the same attention from city police officials.

"The fact that they are speaking Bengali is a factor I would want to know," he said, adding that the information was used solely to be able to determine where "I should face a threat of a terrorist and that terrorist is Bengali."

Galati, however, said that compiling of Urdu-and Bengali-and Arabic-language hangouts and eavesdropping had not resulted in tips about potential terrorist plots.

"I could tell you that I have never made a lead from rhetoric that came from a demographics report," Galati was quoted as saying by the paper.

Top police officials say that the 9/11 Commission found that six of the 2001 attackers lived in Paterson, New Jersey as that city had an Arabic-speaking community.