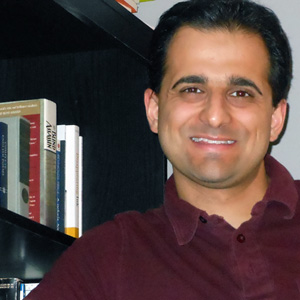 Amit Majmudar is an award-winning poet, the author of an acclaimed novel focusing on India’s partition, and a three-time winner of the Katha Prize. Oh yes, he’s also a diagnostic nuclear radiologist. In his second novel, The Abundance, he examines the lives of Indian-Americans. Majmudar spoke to Khabar recently.

They say flesh is grass, and flesh does grow and wither the way grass grows and withers, but not so that the eyes notice. You need an old photograph to realize how much you have changed, or the exclamation of a friend you haven’t seen in years. Or word of your mortality from a pale, bespectacled man in a long white coat…

Those words from the novel, The Abundance, resonate with the wisdom of years. It was hard connecting them to the friendly, unshadowed voice of Amit Majmudar, the 33-year-old diagnostic nuclear radiologist, speaking by phone from Dublin, Ohio. Born in New York City and raised in Cleveland, he is the author of two volumes of poetry, Zero Degrees, Zero Degrees and Heaven and Earth, as well as a novel titled Partitions.

Majmudar, whose poetry has appeared in The Best American Poetry 2007 and periodicals like The New Yorker and The Atlantic, won the 2011 Donald Justice Prize. Majmudar was amused when asked to explain why many Indian-American doctors are also writers, prominent examples being Abraham Verghese, Siddhartha Mukherjee, and Atul Gawande. “I don’t know why that is,” he said, “except if you look at the Indians who came over in the sixties and seventies many were doctors like my parents. Medicine is the Majmudar family profession. My sister and I are also doctors. Going forward, I don’t think we will see this split. If someone is interested in writing, he will go into writing, and that will be the end of it.”

Though not raised in a literary household, Majmudar became somehow obsessed with literature when he was eleven or twelve. He is skittish about divulging literary influences beyond Shakespeare and Tulsidas. “There are so many,” he said, “it would be unfair to name just a few.” He admitted, however, to admiring the novels of Kiran Desai and Aravind Adiga, and wishes there were more translations of authors writing in the many languages of India. Majmudar has borrowed certain details from his own family life for The Abundance, about an unnamed, dying, Indian-American mother in the Midwest. The parents in the book, like his own parents, are from Gujarat. The father, Abhi, and the daughter, Mala, are both doctors. The setting is Cleveland. Abhi, like Majmudar himself, offsets his medical career with a creative outlet, mathematics in his case.

Majmudar is quick to disavow any suggestion of conflict between his two careers. “It’s not like I am torn between radiology and writing. I do both. I don’t complain about it. I spend a lot of time practicing medicine. That’s my duty to my family. It enables me to provide the life for them that I want to provide.”

He shares his fiction, but not his poetry, with his family. His poetry, a kind of secret language, circulates among a circumscribed tribe of readers. Majmudar is close to his relatives in Gujarat, though it’s been seven years since he’s been back. He maintains no contact with writers in India. Time does not permit it. His days are constrained by his long hours as a radiologist, by the demands on him as a writer, as a husband, as a father to his five-year-old twin boys, Shiv and Savya. “It is not necessary to know other writers personally in order to write, fortunately. It is a very solitary thing.” 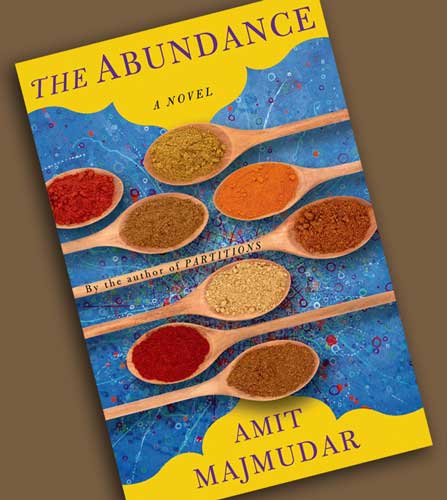 Partitions didn’t get much publicity in India, despite being published there, although it did receive enthusiastic reviews in the U.S. and the U.K. The story focuses on a traumatic, watershed event in Indian history. The Abundance has been published in India, too, and though it’s not about that country, Majmudar insists the story is relevant.

“So many Indians have relatives here,” he points out. “Another connection is that we all seem to be coming together in an increasingly globalized culture. We are seeing a hybridization of Indian and American culture. My nationality is American. My passport has always been blue. But Hinduism is the metaphysical basis of how I look at the universe. For me, Hinduism is above all a polytheistic tradition. I don’t limit my pantheon solely to the Hindu pantheon. I seek out the gods of other religions. I think within those other religious traditions, and I create my art within those traditions as well. The first section of Zero Degrees, Zero Degrees consists of Biblically based poetry. My prose poem/novella, Azazil, based on a Sufi-Islamic retelling of the Fall, was serialized in The Kenyon Review. I have also written a lot of Hindu mythological work. Among them is a full length retelling of the Ramayana in prose and verse that I am looking forward to seeing published.”

Majmudar’s characters in The Abundance are strikingly estranged from the political, social, and cultural life of India. Abhi and his wife, the story’s narrator, are interested exclusively in their Gujarati relatives and their well-being. Mala, the moody partner in an arranged marriage, and her secretive and assimilated brother, Ronak, lacking even that connection, have no connection at all to their parents’ motherland. Majmudar’s interest in India goes beyond family interest. The Indian social order fascinates him.

“Many people, when they look at India, tend to focus on its economic rise, especially in the high-tech sector,” he notes. “They overlook the strong historic divide between rich and poor. The poor, that other India, are still the unknown, the forgotten. But increasingly they are asserting themselves, and in many different ways, from the violent Maoist movement in Bengal to the protests against dams to their struggle for equality and a greater degree of representation in government that is to be lauded and encouraged by Indians in the diaspora.”

There is no mention of politics in The Abundance and few references to Hinduism itself, one of which offers a tragic-comic example of the hybridization Majumdar likes to speak of. Ronak, wanting to avoid conversing with his mother, particularly about her dying, presents her with a rendition of the Baghavad Gita on his iPhone. “You’ll like it,” he assures her. “It’s really holy.” With the second and third generations, Majmudar acknowledged, traditions inevitably get attenuated. “The language will get lost, names will become more multi-purpose than pure Indian. A new society, a new community takes shape. Families begin handing down their own traditions. Things change and things alter. In the end, hopefully, everyone winds up retaining some connection with their past.”

In The Abundance, Indian food, the Indian kitchen, is the connection. The dying mother transmits her cooking skills to her daughter Mala, in whom she will live on in the form of feast, in whom the Indian culinary culture will live on. “Food survives where other cultural practices do not. Food is the last to go.” Reflecting on the winds of changes, electronic and otherwise, that swirl around Hinduism, Majmudar was unfazed.

“I am really not worried about the survival of Hinduism or traditional Indian culture. One of the names for Hinduism itself is Sanatana Dharma, the eternal dharma. What it tends to do is change form, change appearance, even change how it speaks about itself, but it ends up in some way or another persistent. I like to sit back and watch the hybridization take place, but also how the ancient traditions persist, and how they persist in me.”

Robert Hirschfield is a New York-based freelance writer whose work has appeared in Outlook, Sojourners, and Matador, among other publications.