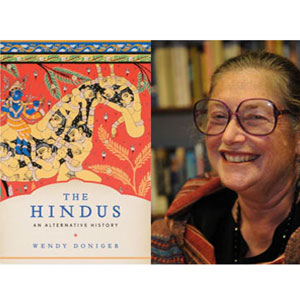 It’s not about whether one agrees or not with Wendy Doniger, author of The Hindus: An Alternative History, which was withdrawn by Penguin India. It’s about how this capitulation to threats is another example of how we are moving away inexorably from a liberal, tolerant society.

Rebellion has never been easier. It’s just a click away.

My social media feed is filled with agitated people posting links to sites from where one can download Wendy Doniger’s The Hindus: An Alternative History. Soon we might see people’s Facebook profile pictures being replaced by the cover of her soon-to-be-pulped book. I spotted someone on Facebook commenting with some bemusement that he had been using her hefty tome as a good backrest for his laptop. Now he felt compelled to crack it open and actually read it.

This is a good week for those who like to ban books or pulp them.

It also marks the 25th anniversary of the fatwa on Salman Rushdie and The Satanic Verses. Had that book been banned globally and pulped, it could have truly disappeared. That’s harder to accomplish now. In our brave new world, a pulped book could become as anachronistic as a rotary telephone. Burning Kindles is a far more expensive proposition than burning books and a useless one since the book still survives. Doniger, in her statement, takes some comfort in that shift.

Finally, I am glad that, in the age of the internet, it is no longer possible to suppress a book. The Hindus is available on Kindle; and if legal means of publication fail, the internet has other ways of keeping books in circulation.

Take that, Dinanath Batra and the Shiksha Bachao Andolan.

Yet all the sound and fury of protest cannot hide the uncomfortable truth. Batra won. Using the law as it currently stands. And he is promising more to come.

“The good times are coming,” he tells Mint. “Believe me.” And he is not some lonely maverick. Prakash Sharma of the Vishwa Hindu Parishad says “(T)he VHP is following as Batraji leads.”

Doniger said Penguin was “finally defeated by the true villain of this piece—the Indian law that makes it a criminal rather than civil offense to publish a book that offends any Hindu, a law that jeopardizes the physical safety of any publisher, no matter how ludicrous the accusation brought against a book.”

She is correct about the law. But it’s actually about offending anyone, not just Hindus. As Pratap Bhanu Mehta writes in the Indian Express, “The argumentative Indian is being replaced by the offended Indian.” And liberals and freedom of expression advocates get tied up in knots, he writes in the “same tiresome argument”:

The point is not whether the newspaper protesting the pulping of Wendy Doniger’s book would print that Danish cartoon about the Prophet. Or saying that at least no one put a price on Wendy Doniger’s head as happened to Rushdie. That’s like saying you should be thankful we are only imprisoning you for adultery instead of stoning you to death.

Aseem Shukla wrote a detailed takedown of Doniger, a far more lucid articulation than Batra’s “You, Noticee” rant. Doniger responded spiritedly. Shukla argued back trying to draw a distinction between “academic freedom” and “academic legitimacy,” taking issue with specifics: for example, how she translates the word “kama.” That is debate. Even protesting a book is debate. Pulping a book is not debate.

Salil Tripathi, who has written passionately about freedom of expression, says in an earlier interview, “If you want to build a truly liberal society, you have to protect the right of the speaker and not the one who feels offended.” It’s easy to stand up for a book we believe in. Standing up for a book one disagrees with is the true marker of principle.

On the 25th anniversary of the Rushdie fatwa, it’s worth remembering that when the Indian government de facto banned that book (or rather its import) it also set a precedent. It sets off an “offence epidemic,” says writer Ruchir Joshi, in an interview about the fatwa, that “takes in Taslima Nasreen, M. F. Husain, the film Fire, etc.” Once the business of being offend- ed becomes profitable, Joshi says “We are protesting about a book, a film, a historical treatise on Shivaji. You can walk into academic’s office and ransack it. Why? Because we are offended. And that is something used as an instrument for furthering an agenda of capturing political power.” Now the government does not even have to get into the act as a book is pulped. Everyone can get to be nanny now.

While Facebook acts of protest are welcome, the bitter truth is that Batra did the hard work of slogging it out in India’s labyrinthine court system and forced Penguin to come to a settlement. That’s arduous, time-consuming, and requires a commitment most of us do not have. We would rather that the revolution be downloaded.

But if the law is the problem, it’s the law that has to be challenged. We may fulminate against the settlement now but most of us were not following the case for the four years it was being fought.

In 1960 there was one such famous case. Lady Chatterley’s Lover was being prosecuted under the Obscene Publications Act in England, in part because it was being sold for “the price of 10 cigarettes”, which would put it within easy reach of “impressionable” women and the working classes. As Geoffrey Robertson recounts in The Guardian, its publisher fought for that book in court, recruiting expert witnesses including novelists, psychologists, even clerics. It tried to prove that a head-count of swear words, an offending passage in isolation, were not sufficient. The book had to be taken as a whole.

Robertson writes that there was a “myth that freedom of speech has been safely protected in England by the jury.” In fact, juries tended to do the judge’s bidding and convict any publisher whose books might have a “purple passage” that could “deprave and corrupt.”

But the Chatterley trial marked the first symbolic moral battle between the humanitarian force of English liberalism and the dead hand of those described by George Orwell as “the striped-trousered ones who rule,” a battle joined in the 1960s on issues crucial to human rights, including the legalization of homosexuality and abortion, abolition of the death penalty and of theater censorship, and reform of the divorce laws. The acquittal of Lady Chatterley was the first sign that victory was achievable.

“No other jury verdict in British history has had such a deep social impact,” claims Robertson. But it also proved, and continues to prove, says Robertson, “that literature in itself does no harm at all. The damage that gets attributed to books—and to plays and movies and cartoons—is caused by the actions of people who try to suppress them.”

Incidentally the publisher who defended Lady Chatterley’s Lover way back in 1960 was Penguin Books.