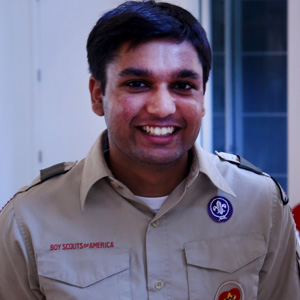 Indian, Hindu, Gandhian…these are not by any means traditional credentials of most Boy Scouts of America. But KYLE PATEL affirms the wisdom of pushing against our comfort zones to expand our horizons.

After growing up as a middle-class Indian boy in the suburbs of Atlanta, Georgia, I had a culture shock when my parents moved us out to Jackson County, a rural beacon of small towns, shotguns, and Southern hospitality. Despite living in the South my entire life, I had never gotten to experience the quaint, congenial attitudes that people so characteristically assign to it. It was not until my fourth-grade teacher introduced us to two Boy Scouts whose demonstrations in creating fire dazzled my eight-year-old mind that this move truly impacted me.

I came home with a pamphlet about Scouts, and with sparkling, youthful eyes that I doubt he could have refused, asked my Dad if I could join. A few weeks later, I found myself zealously memorizing the Scout oath and motto in preparation for the induction ceremony. However, the first thing I noticed when I began attending the Monday-night meetings was my status as the only person of color in my troop. I never felt isolated, but conversations about dirt bikes, car racing, and military affairs were foreign concepts. Boy Scouts gave me the opportunity to learn about these topics that I would otherwise never have discussed and develop my overall background as a member of society. 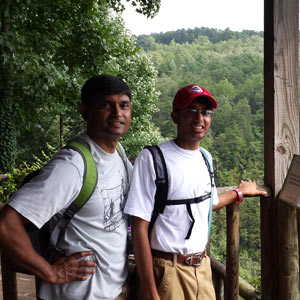 Kyle (right) and his father, Pete Patel (left), at the top of the mountain after a hiking trip at Tallulah Gorge.

I can recall my first hiking trip: a 3-day, 14-mile journey in the middle of December through the woods of Blood Mountain, a specimen of the Appalachian mountain range whose name speaks for itself. However, I was solely focused on the excitement of taking a trip with my fellow Boy Scouts, whom I had begun to think of as brothers. It started out precariously; I tripped four times the first night we hiked, but the encouragement of my fellow members, along with my determination to succeed, propelled me forward. My pace quickened, and by the last day of the trip, I was jiving, taking in the sights, smells, and sounds of nature. It was a transcendental experience that I had never had before, and I found myself continuously looking forward to others that were to come.

I, in turn, was keen to share my culture with the other boys as well. They were interested in learning about my religion, as I was probably the only Hindu they had ever met, and always asked questions with animated curiosity. I shared these latent pieces of my life with people who I never thought would be interested and learned something about adjusting my assumptions along the way. During our annual troop Christmas parties, we always put on some skits for the parents, and one year we decided to do a skit on Gandhi. I played the leading role, and from then on, everyone endearingly bestowed the nickname of “Gandhi” on me. 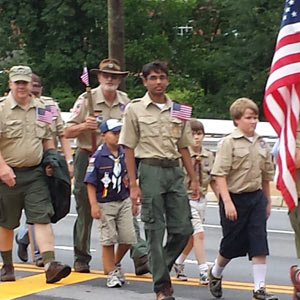 (Left) The Indian-AMERICAN scout at a parade with his troop.

The novel experiences allowed me to learn the skill of adjustment and acclimation as my Indian culture initially clashed with the experiences and skills I learned through Boy Scouts, but I learned how they could beautifully coexist and give me a much broader perspective on life.

I dedicated many years to the organization, and I recently finished my journey by attaining the rank of Eagle. When thinking about my final Eagle project, I pondered how to best give back to the community I had newly discovered, and I found something that was fitting. I catalogued the cemetery behind our troop church and created a directory for visitors to find their loved ones. It was a unique project, but what’s more is that it will outlast my time there and help strengthen a community that was initially so different from what I was used to.

Although to some, the Eagle rank is just a remarkably difficult feat managed by only 5% of all Scouts, to me, it means so much more. My family moved four times through my seven years in the troop, but I continued attending the meetings throughout, and even after becoming an Eagle, I still make the 40-minute trek on Mondays because of the family I have developed there.

Kyle Patel is a high school senior at Gwinnett School of Mathematics, Science, and Technology. He is currently on a year-long internship with Khabar magazine through his school.