Youth: Standing on the Bridge 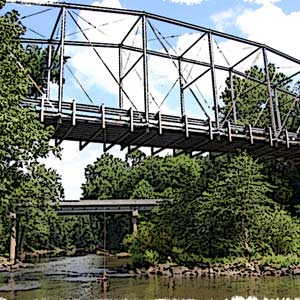 From confusion regarding belonging, to embracing both sides of the divide: these musings on dual cultural identity resonate with many second- and third-generation youngsters.

It’s a topic that’s been visited in countless movies and books, but the fact remains that growing up as a second-generation Indian-American in America is not easy. Especially if you’re raised in an orthodox household where your parents are trying to instill in you Indian values and culture by all means possible. I’ve attributed their doing so to a learned fear of losing their identities, and of losing their connection to their homeland. Regardless of the reason, I am one amongst the innumerable second-generation Indian-American children who feel lost growing up with an amalgamation of two cultures so different from one another.

There is a reason that the term “American-Born Confused Desi” became so popular. I have always felt comfortable interacting with my non-Indian counterparts but there always seemed to be an invisible barrier, something that prevented me from entirely immersing myself in the immediate environment I lived in.

I was freely allowed to wander to either side, but somewhere inside, I felt incomplete.

What followed was a long inner struggle, and after a point, I resigned myself to remaining a member of this no-man’s land, learning to be content with being a wanderer between the two cultures that have shaped me.

It was a late November morning and I was cleaning my hostel room in Chennai, India, when I realized that something had changed. I had been studying in India for a few years now and after all the initial adjustment issues, I had actually grown quite comfort- able being in Chennai.

It made me wonder, “Had I been looking at this whole situation as if it were a glass half-empty?” What if I didn’t belong in one place because I belonged in both? Had my parents managed to successfully ingrain in me our Indian roots to the point I felt comfortable enough studying here, so far away from home? Of course, home is still Fremont, California; I did grow up there, after all. However, Chennai has also grown to be a second home of sorts.

Adjusting to life in Chennai was not without its own set of biases. Just as there are many prejudices in the U.S. about Indians from India, there are equally as many stereotypes among Indians about children of immigrants who have been brought up abroad.

Thanks to various scenes depicted in popular movies and books, one of the following limitedlabels are immediately allotted to people like me: she either shows up as an airheaded diva who is oblivious to the Indian culture around her until the local hero shows her what she has been missing, or she gets the tag where she is referred to as “being Indian despite having been brought up abroad.” It has been stamped into the minds of the masses that the hordes of Indian-American children growing up abroad can either be Indian or not; not many people seem to realize that many of us stand on this bridge in between.

Early in my first year of college, I faced many of these prejudices as people asked with surprise, “How do you speak Tamil so fluently?” Or there came a shock with the realization that I was equally fluent in reading and writing it as well. (All those summers when my mom made me practice writing Tamil alphabets and all the years of my dad driving me to Tamil classes every Sunday morning really paid off!) When “Tamil Thai Vaazhthu” (“Salutations to Mother Tamil”) played at the start of a college ceremony and I could sing along whereas many of my local counterparts could not, it made me glad that my parents had not only forced me to learn about, but also live my Indian roots.

I don’t know of too many other people who have Aruna Sairam and Lady Gaga in the same playlist, but it goes to show that many of us growing up abroad are exposed to varied cultures.

My two cultures, which initially seemed to oppose each other, actually make me who I am, as I have now learned.

All the initial confusion and frustration stemming from that diversity have now been replaced by a sense of pride and gratitude in being able to belong to these two places. My spot in the middle of that bridge feels more like home than ever before.

Nimi Jayachandran is an avid reader and passionate writer who is currently pursuing medicine in Chennai. She was born in India and brought up in the Bay Area. Source: India Currents.