Home > Magazine > Features > Youth: What the heck is a slum?

Youth: What the heck is a slum? 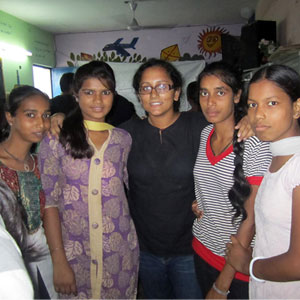 Photo: Ankita Rao (center) with some of her students at Bapu Dham.

The spring day is out of storybooks—warm sun, cool breeze, shouts of playing children. Everything but the rustling leaves; there aren’t many trees in this neighborhood.


I sit on a rope cot with the matriarch of my adopted family, my host grandmother, watching kids play cricket with a stick from nearby construction. Dadi’s face is etched with age, her silvered hair covered with a white scarf. She smiles and jokes with me, her usual volatile anger tucked away until evening.

There are elements of my latest home that I could only romanticize about when I was in suburban Florida; Bapu Dham is a community where everything is shared, from food to clothes to children who roam in and out of neighbors’ houses. In the evenings mothers take their kids to the park, gossiping about a scandalous wedding while kids coast down the broken slide. There is no alone here, there is no laziness.

But this is a slum. This is the place that people in other parts of posh Chandigarh continue to forget about; some of them don’t know it exists. If they do mention it, they talk about the violence, the dirtiness, the poverty. They tell me: Be careful. Don’t play Holi in Bapu Dham, you will get hurt and sick. Don’t drink water there. Don’t roam around after 6 p.m.

I know that one block doesn’t trust the others, that mothers hide their daughters from the boys who I see as my biggest helpers. I’ve lost sleep over kids plucked out of school and our library to spend hours repairing motorcycles. I’ve met women with AIDS, male prostitutes that fit in nowhere, toddlers who may never walk because surgery is too expensive.

But I still don’t know exactly what a slum is. The word denotes poverty—evokes illegal huts and dirt lanes filled with trash and water and mosquitoes. There are development terms: marginalized community, scheduled caste, migrant laborers. Then there’s the effect of Hollywood, of Slumdog Millionaire and Born into Brothels, of any developing country-documentary that makes it to the big screen.

But defining a slum is a task beyond my grasp. Though I prefer the word to any political correct term when describing my project, I feel unsettled classifying Bapu Dham, in all its diversity, as such.

From what I’ve seen, these communities are often the running, supporting legs of a city, filled with people who make other, richer people’s lives easier. This is where the tasty street stall pani puris are originally rolled and fried, and the fabric grocery bags are sewn. This is where the sweepers, moppers, drivers, cooks, and carpenters sleep at night. If parties are planned and events organized, the origin of the decorations, the labor, the food is usually here.

This society is complicated, fitting nowhere in the neat, urban planned grid of Chandigarh. There are three phases, varying in income levels, livelihoods and family size. There is the Great Divide between the pakka and kaccha houses, the cement apartments and temporary huts, respectively. And therein exists an unorganized division of caste, Indian state, language, religion, and even crime rate. This is a city, perhaps even a country, within a city.

Lack of education, income and awareness—the pillars of poverty—cannot be quantified in bar graphs here. In one nearby household, the oldest girl was pulled out of school in seventh grade while the younger daughter continues to excel in the best public school available. My current host family buys ice cream every week and has marble floors while the next lane’s ten families share a single, inconsistent water tap.

There is nobody here I’ve met who doesn’t know that smoking is bad, school is good and that they can have better quality of living. But the issues persist, leading to untimely deaths, dropouts, preventable illness, and bad reputations.

To make peace with figuring out development, my project or this neighborhood, I’ve let go of definitions. I can’t look at a slum in any city now without fitting it into the puzzle of the greater population. I recognize that the flaw is not in the people or the locality, but in the system of oppression that blinds the rich and the poor. The task of labeling becomes less daunting, less important, when working with the kids in Bapu Dham, whose talent and enthusiasm have little to do with BPL cards or government schemes.

In the end this is a neighborhood. It is the place that the children think of when they want familiar comfort, their mothers, their homes. It is where tired women continue to work and exhausted men find shade from the ceaseless day. And for all that it is and can be, Bapu Dham continues to reveal its points of light, its sharpened edges, its quickened pulse.

[Ankita Rao is an August 2010 Indicorps Fellow. Based in Chandigarh, she is partnered with Yuvasatta and focuses on creating positive after-school learning environments.]