COVID-19  In-depth info for Indians in Atlanta/Georgia. Click here
Home > Magazine > Spiritual Straight Talk > Soil Is Our Real Gift to the Next Generation

Soil Is Our Real Gift to the Next Generation

When a U.N. agency asked me to list the three most important ecological issues of the moment, my answer was, “Soil, soil, soil.” That holds true today more than ever. The very word “human” is linked to the word “humus” or soil. Without humus, human life is unsustainable.

In 1998, when certain U.N. agencies predicted that sixty percent of Tamil Nadu state would become a desert by 2025, I realized this prophecy might well come true.

Tree planting was the only way forward. When I proposed the idea of restoring at least 33 percent of the land to green cover, it was dismissed as idealistic. But since then, 57 million trees have been planted on private land. My role was to plant trees in people’s minds; people did the rest. This could only work as a mass initiative. We have since been focused on the issue of water—another inseparable concern. Given the rapidity with which water tables are dropping and cities are reeling with water shortages, this is also a vital necessity.

However, these issues cannot be viewed in isolation from “living soil”—that critical natural resource. We are on the brink of “soil extinction.” If we don’t take corrective measures to renew soil, the consequences in the next twenty-five years could be disastrous. Water depletion is visible. But soil erosion is less dramatically apparent. Since our crops still grow, we are unaware of how terribly impoverished our soil quality is. Humanity cannot speak of prosperity, equality, or even spirituality if it takes for granted the very earth on which it stands. 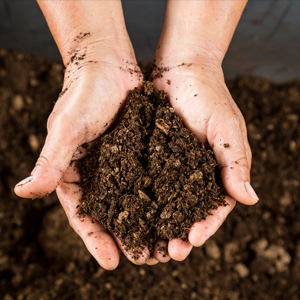 Of nearly 160 million hectares of arable land in India, nearly 60 percent is labeled as “distressed soil.” In three decades, we are heading towards a major food crisis which, in turn, could mean mass urban migrations, social tensions, and disruption to life and livelihood. Soil weakening also means lowered levels of nourishment. The nourishment value in our vegetables has plummeted in the last 25 years, and over 70 percent of our children are anemic. To produce a future generation that is weaker than ours is a terrible crime against humanity.

What is the way out of this predicament? The primary source of water replenishment in a tropical nation is the monsoon. If we want to preserve rainwater in the soil to feed our rivers, lakes, and aquifers, we need substantial vegetation. Water can be retained in the soil only when there is rich organic content. Vegetation and animal waste are key to this; or else, the water will simply flow away. This is the true wealth of a nation: animal waste and leaves. Our real gift to the next generation is not business, money, gold. It is soil. Our first step must be awareness; the next step policy; only then can meaningful action happen. But one thing is clear: as a global policy, a minimum three percent of organic content in agricultural soil is an absolute necessity. And for this, vegetation is a must.

With traditional knowledge, Indian farmers still feed over one billion people. The number of microorganisms found in a single cubic meter of Indian soil is still among the world’s highest. With a little initiative, this fertile, richly alive soil is fully capable of bouncing back. But we can postpone action no longer. It is time to reverse this potential catastrophe and save our soil. Let us make it happen.