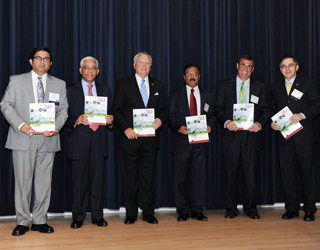 With the most recent Census data mapping Georgia as the 2nd fastest growing state for Asian minority business ownership, interest is high in doing business with India. The Georgia Department of Economic Development, the Metro Atlanta Chamber of Commerce, Georgia Tech Center for International Business Education & Research (CIBER) and a host of marquee corporations were recent supporters of the second annual USA India Business Summit (UIBS), inaugurated on June 21st by Governor Nathan Deal at the Georgia Tech Research Institute Conference Center to take the next leap in the current bilateral trade and investment. In the year ahead, the emphasis is to link small and medium size enterprises of India and the U.S., which would help employ many more Americans.

Hundreds of entrepreneurs shared their success stories and tips on cultivating relationships and finding the right business partner. They provided insight on overcoming government regulations, trade barriers, and challenges of selling to a multicultural market.

Interesting facts gathered at the Summit:
• India has invested $12B in disease management such as AIDS, malaria, etc.
• Healthcare growth rate of 8.9% is projected to last another two years–Current needs of $40B will expand to $75B by 2012.
• India spends 5% GDP on healthcare, compared to 16% in USA.
• In the U.S., 80-90% of revenue comes from the government, whereas 70-80% in India comes from patients.
• A family’s income is hurt by 15%–30% by illness related costs. Catastrophic health issues put the family under the poverty line.
• India owns 50% of traditional vaccines market. The Indian drug market will eclipse 20B in 2015. Nutraceuticals is already a $1B market due to health consciousness.
• In 2010, India ranked 4th after US, China, and Japan, but will rank 3rd in 2020 after U.S. and China according to the IMF. By 2020 India will have 47M surplus in the working age population, with the result that there will a working Indian in all parts of the world.
• Tata Company, the maker of the Nano car also owns Jaguar and Land Rover. Bharati Airtel has over 140M subscribers in Africa. Mahindra & Mahindra will cross 6.7B in sales for 40hp tractors. The number of daily new phone subscribers is 500K. Indigo Airline has ordered 150 passenger aircrafts from Airbus—the largest order ever received for delivery—by 2016. Today US is India’s 2nd largest trading partner. US exports to India tripled in last 3 years
• India’s middle class will grow from 50B to 583B by 2015. The United States has 20 cities with more than 1M people, whereas India has 68 such cities.
• Infrastructure spending needs in India is approximately $1.2 trillion. It spends 35-50% more than US and China does on infrastructure.

At the banquet, Recognition Awards of Merit were given to Mr. Mohan Suresh for exports; Emory Vaccine Center for increased cross-border business in the Science & Technology; Mohit Sureka for Young Entrepreneur; and Dr. Beheruz Sethna for Community Builder. And if music and dance can bridge the cultural divide, the gala dinner dance performances on Saturday night were proof that the time for our new business ventures was ripe.