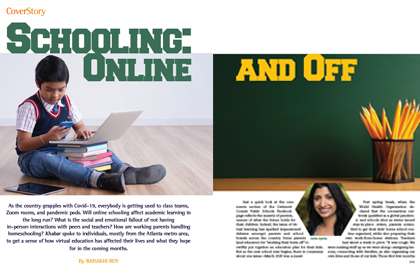 Schooling: Online and Off

Saying that school openings have been challenging for students, teachers, and parents is an understatement. While many have accepted online education as a temporary fix, there are concerns—just as there are concerns about contact on campus. Khabar takes a closer look at what all of us are learning in the Covid era. Read more »

Musings: Under the Tamarind Tree

Sweet, bitter, sour—that’s the taste of tamarind. Not only does it remind us of life, as the author Bharti Kirchner found out, but it can provide comfort and teach us to face challenges with resilience. Read more »

A public health worker on the benefits of a 10-day water fast that she found surprisingly easy to complete. Read more »

Yes
Books: A Passion for News and Fiction

The editor of NRI Pulse talks about her passion for fiction, which resulted in Purple Root, her debut novel. Read more »

In response to our call, writers shared essays on how the BLM movement and the pandemic affected them. Read more »

Yes
Icons: The Messiah of Self-Realization

The author of American Veda on the lasting impact of a mystic who came to the U.S. a hundred years ago. Read more »

Yes
IndiaScope: A Dangerous Turn for India and China

A shocking and bloody encounter involving hand-to-hand combat brought the world’s two most populous nations to the brink of war high in the Himalayas. Read more »

For Indian-Americans, bicultural identity is an everyday reality. But while this cultural identity works to uphold our Indian traditions and values, we need to remember that when voting as American citizens for an American President, it is our moral and civic duty to vote based on which candidate will be best for America. Other considerations such as the bilateral relations between the two nations should only come in as secondary concerns. Read more »

Letters to the editor: Goldmining our Indian heritage / We too love our yogurt containers. Read more »

The Cost of Medical Care

The expense of insuring yourself may be minor compared to the price of surgeries and procedures. Read more »

Now About That Loan Forgiveness

The Paycheck Protection Program (PPP) Loan was government assistance initiative for the Covid-19 crisis. New rules apply after a June 5 law that extends the covered period to December 31, 2020, and relaxes some other criteria. Read more »

Faddish diets are not the solution for losing weight and staying fit. Why Keto, Paleo, and other fad diets are not magic pills. Here are some strategies to welcome a sustainable and enjoyable approach to weight loss! Read more »

On July 31, DHS announced a final rule that adjusts fees for certain immigration and naturalization benefit requests effective October 2, 2020. The weighted average increase is 20 percent. Some of the more common forms used are listed below with their fee changes. Read more »

The tragic and untimely death of Sushant Singh Rajput has stirred a hornet’s nest not only in Bollywood circles, but in media and political circles too. What initially seemed to be a case of suicide is shockingly turning out to be one of homicide. With the CBI, the premier investigating agency of India, now probing the case, it is being said in loud whispers that the actor was murdered. Read more »

Princepal Singh, a 6-foot-10 forward from Punjab, has signed to play in the NBA G-League, the National Basketball Association’s official minor league, in 2020-21. Read more »

Dr. Sudhakar Jonnalagadda takes over as president of AAPI

After having served as director of Medical Association of Georgia Board from 2016 onwards, Dr. Sudhakar Jonnalagadda has taken over as the 37th president of American Association of Physicians of Indian Origin (AAPI). Read more »

Read our regular columns: ‘Who, What, Where, When & Why’ and ‘Book Matters’. Also: ‘Being Kamala Devi Hariss' and 'Post-Covid Pollution and Power'. Read more »

A Voice for Indian-Americans

Sunil Adam, who was the editor-in-chief of India Abroad until it stopped production, is the founding editor of American Kahani. He launched this online portal to showcase uncensored Indian-American voices. Read more »

Death is a taboo in most societies in the world. But what if we’ve got it completely wrong? What if death was not the catastrophe that it is made out to be but an essential aspect of life, rife with spiritual possibilities for transcendence? Read more »