Shiva–Theater with Stories Our Mothers Told

By Ajay Vishwanathan
May 2013 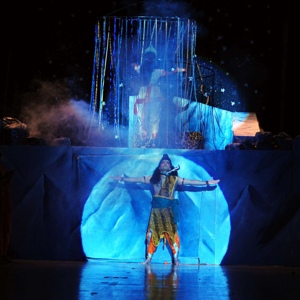 Munching on popcorn during a Yash Chopra flick, you expect to be regaled by memorable music and lofty locales, and are rarely disappointed. When people buy tickets to a Syam Yellamraju play, they envisage stage getup that deserves applause, and settings that make you gasp and wonder, "How did they do it?"

Chinmaya Mission Alpharetta (CMA)’s fund-raiser "Shiva" was no different. On March 10 at Clayton County Performing Arts Center, it delivered mountainous backdrops, intense scores, and symbolic props, every scene with at least one element that awed. 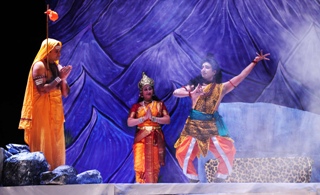 The impressive opening scene employed a dazzling interplay of light and shadows. According to the Shiva team, these shows are meant to “be educational to kids and adults alike,” and the messages are driven home by sensory impact. One example is the scene where an actor assumes a one-legged stance and holds it for a dramatically long time as the background score rises in a slow crescendo. Another is the part where Ganga gets ensnared in Shiva’s tresses, and another where Nandi, the venerated bull, dances on stage. Effort, coordination, and passion show, as in scenes where the two actors who play the dancing Shiva and the acting Shiva segue on stage.

This team has delivered shows many times before; mistakes may happen, but directors regularly drill into their performers (ask coordinator Krishna Kesavarapu!) to move on unperturbed. “I learned more about India and our culture after joining this troupe here in the U.S. than what I had inculcated back home,” says Mahesh Kommajosula, someone who has mastered the art of silently working behind the scenes. 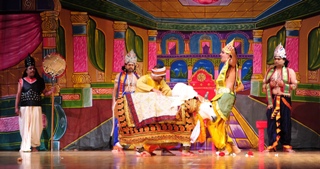 Special moments in "Shiva" include Bhasmasura being hilariously tricked by Vishnu (in the form of sensual Mohini) into touching his own head and thus turning into ashes, and the segment where Nandi’s laughter is cleverly intermingled with inspired music as Shiva and Parvathi mesmerize the audience in an ananda thandav on an elevated platform depicting Mount Kailash. The finale was appropriately majestic, with dancers cutting loose, music escalating to a climax, and almost the entire cast assembled for Shiva arati. 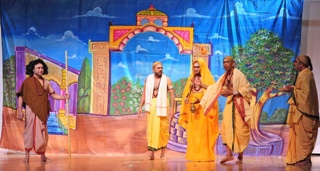 What did all these hours of sweat and grind achieve? Mahashivratri has always been special at CMA, where children make lingams, participate in pujas, sing bhajans, and learn the many aspects of Shiva’s life and the essence of his stories. Throwing in that exclamation point, grandiose shows like this are aimed at connecting visually to the essence behind those tales, to evoke devotion through dramatically depicted scenes. As a child, I forced my mother to read me the same Amar Chitra Katha books over and over again; one of them had a cover, I still remember, in which a lovely maiden in a pink-and-white sari gets sucked into dark locks of hair. I’m sure everybody in the audience felt some connection as they watched a loud and proud Ganga entrapped in Shiva’s humbling curls. This is perhaps the kind of connection those involved in the play wanted to accomplish, and more than succeeded in doing so.