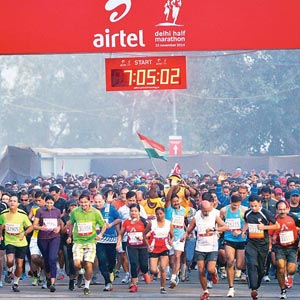 About 100,000 people turned out for the Airtel Delhi Half Marathon. Only 32,500 did some actual running; the rest stood on the side of the road and tried to catch a glimpse of Gul Panag and other celebrities. That’s what I would have done if I had been in Delhi.

A half-marathon is too long for me. Forget about running 21 km, I’m exhausted just running to the bathroom.

Actually, I run a little bit longer than that, usually about 30 minutes at a time. I probably cover a distance of about 5 km on a good day. For comparison’s sake, Ethiopia’s Guye Adola ran the Delhi Half Marathon in a winning time of 59 minutes and six seconds. He would have left me so far behind, I would have needed a Hubble Telescope to keep him in sight.

While Adola set a course record with his time, I would have set a curse record. The headline in the newspaper would have said, “Last place runner curses all the way to the finish line.”

Don’t get me wrong—I enjoy running, but it’s something I do for health reasons, not to compete with anyone. There’s nothing wrong with competition of course, but I’m not eager to be an “also-ran.” The dictionary defines an “also-ran” as a contestant who fails to finish among the top three, but in my case, it would be someone who always finishes among the bottom three.

If I wanted to finish in the top three of a race, I’d probably have to resort to illegal tactics. Taking steroids or other performance enhancing drugs would be one option, but whatever glory I receive for winning would probably be short-lived. The results of the mandatory drug test would be revealed and I’d have to hand my medal to whichever Ethiopian or Kenyan runner I had nipped to the finish line.

Another option would be to try the tactic that allowed Rob Sloan to win third place in a British marathon in 2011. Competing in the 26-mile Kielder Marathon, the 31-year-old man ran for about 20 miles, then took a bus to the finish line. Well, not all the way to the finish line, but close enough that he could hide behind a tree, wait for the first- and second-place runners to run past him and then rejoin the race to claim third place.

Unfortunately for him, a few other runners grew suspicious, saying that they hadn’t seen him pass them. Organizers of the race launched an investigation and Sloan confessed. Not only was he forced to return his medal, he was also expelled from his athletics club, the Sunderland Harriers.

Taking a bus to the finish line is an uncommon tactic, but Sloan isn’t the only runner who has tried to avoid covering the full distance of a race. At almost every marathon, someone is disqualified for taking a shortcut. More than three decades ago, at the 1980 Boston Marathon, the female winner Rosie Ruiz was disqualified when it was discovered that she had spent part of the race riding the subway (underground train).

I don’t plan on running in the Delhi Half Marathon anytime soon, but if I did, I won’t be taking a bus or train to the finish line. I’d rather take an auto-rickshaw.

It would help me avoid last place and also give me a chance to wave at the Kenyan and Ethiopian runners as they pass me.