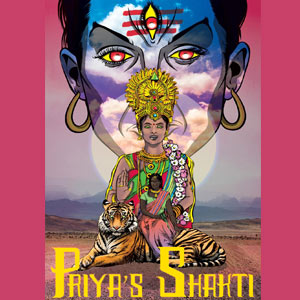 Can a mythology-inspired comic book series make an impact against Indian society’s contemporary ills such as rape, acid burning, and sex trafficking?

I first met Ram Devineni, 44, in a lower Manhattan bar some years ago, at a poetry reading featuring the poets in his magazine, Rattapallax. Among verse loyalists, a small, often peevish tribe, Rattapallax was highly regarded.

I needed a moment to adjust to the new Ram Devineni, who was waving to me as he entered Café Angelique, not far from that long-vanished bar where we had met first. Priya’s Shakti, a comic book series that he created and co-wrote became an overnight sensation in 2014—making this Hyderabad-born Indian-American an emerging contributor to India’s national debate about rape and acid attacks. Recently, Netflix also released Devineni’s new documentary, The Karma Killings, about the serial ‘cannibal killings’ in Noida in 2006. 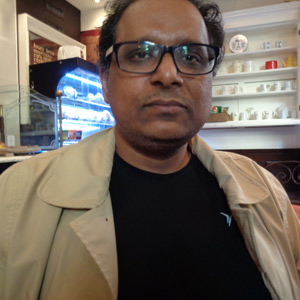 Thanks to the success of Priya’s Shakti, Ram Devineni, its Indian-American creator, is now an emerging contributor to India’s national debate about rape and acid attacks.

“I was in Delhi shooting a documentary when the rape of Jyoti Singh on that bus in Delhi shook India. I took part in the protests that followed. The issue was so hot and extreme. You had one extreme, like the cop I spoke to, who said, ‘No good girl walks home alone.’ In fact, she had a male friend with her, but that didn’t really matter. It was about blaming the victim more than anything else. On the other extreme it was, ‘We need to castrate and hang those men.’ I am not a reporter. I decided a documentary wouldn’t work. I was more interested in storytelling and narrative. I wanted to create a new mythology. The idea of creating a female superhero in a comic book format was captivating.”

Given the multinational input in Priya’s creation, including the artwork of Dan Goldman, a Jew from Miami, it was a little jarring to be discussing these weighty subjects of rape and acid attacks in India amidst the furious orderings of café lattes and lacquered pastries in Manhattan. I learned from him that just prior to publication the BBC ran a story on Priya’s Shakti on the front page of its website. The story ignited other stories. Devineni himself was summoned to the New York offices of Al Jazeera for a 4 a.m. interview, as he was flying to India later that day.

The soft-spoken artist took a sip of his coffee and shook his head, indicating still a residue of disbelief. “The Times of India did a story, India Today, everyone. I will tell you how viral it went: I got an email from a friend who sent me a clipping from a newspaper in Milan. The second page had an article on the comic book. A friend in Paris said she saw me on Canal Plus on the evening news. I didn’t talk to either of those news stories. They just picked it up.”

Reading Priya’s Shakti, I was surprised to find Devineni embroiling the gods in the terrible and touchy issue of rape. Wasn’t that somewhat controversial? I asked him.

“Not at all. Indian mythology is very fluid. Hinduism has lots of gods. I chose Shiva and Parvati, Shiva’s wife, because Parvati, who incarnates in Priya, is very empathetic, and forces Shiva, who has the tendency to be aloof from the concerns of humanity, to open his eyes. 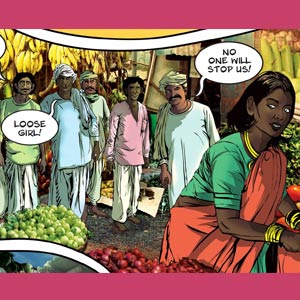 “I decided a documentary wouldn’t work. I was more interested in storytelling and narrative. I wanted to create a new mythology. The idea of creating a female superhero in a comic book format was captivating,” explains Devineni about how the idea for this comic series germinated.

Before creating his comic books, Devineni made it a point to interview rape and acid attack survivors. Finding rape victims willing to talk was tough. “The stigma of rape is so horrible. I spoke with a girl who was gang raped in a village near Delhi. The men actually videotaped the rape on an iPhone, and threatened to release it if she went public. She went home that night and didn’t tell anyone, didn’t even get medical help. It was only a few weeks later, when those same men raped another woman, that she went public. Eventually, she did get them thrown in jail. She told me that during the whole process her father got very depressed and committed suicide. Her family was stigmatized. I thought, if this is what rape victims have to go through to get justice, why would any rape survivor want to get justice?”

Despite the shaming inherent as well in the acid attack, it does not carry the same stigma as rape, and finding women to interview was much easier. He was supported by, and has publicly supported Stop Acid Attacks, a group formed by acid attack victims. The group, Devineni said, sprang up not from the feminist tradition, but from India’s tradition of social activism.

The women he spoke with all denied having a previous romantic interest in their attackers. (There are of course acid attacks by husbands against their wives, but those are far fewer in number.) The idea of revenge festered in the minds of rebuffed suitors as an entitlement of patriarchy.

“Some of the women I talked to said they spoke with their attackers through the courts. Some of them would claim they had no idea how potent the acid was. It’s a very deceptive liquid. It looks like water. In the comic book we made it green and bubbly. The perpetrators knew what they were doing was bad. They just never realized how horrific it could be.” 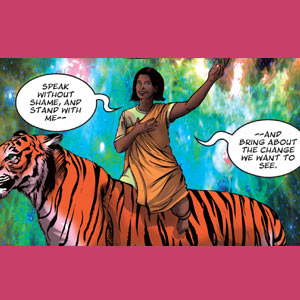 Monica Singh, now thirty, is a case in point. Eleven years ago in Lucknow, her face was disfigured (and reconstructed forty-six surgeries later) and 65% of her body was seared when the man she refused to marry recruited thugs to hurl acid at her as she was driving her car. Surviving her ordeal, she established the Mahendra Singh Foundation for acid attack survivors. She also worked with Devineni as a consultant on Priya’s Mirror, his second book.

Devineni put me in touch with Singh, which was commendable of him, considering she was quite critical of Priya’s Mirror. I met Singh at a small café in mid-Manhattan. She is a tall, engaging woman who says what she thinks as befits one who has returned to the world after her sojourn in the netherworld. “Certain things weren’t right. There was just one hero, Priya. There are so many survivors. Everyone is on a different level. Some feel sorry for themselves, others are coping. The situation is complex. I would have liked the story to be more challenging.”

Devineni plans to begin distributing his comic books to schools in India next year with the help of the Lions Club. He has in mind a dozen schools in Delhi to begin with.

He also has in mind a third Priya comic book, this one about sex trafficking. He plans to travel to Kolkata this year to research the story. He has linked up with Apne Aap, a Kolkata-based group generically similar to Stop Acid Attacks. Also a grassroots organization, its founders were former sex workers with a vision of empowering economically needy, socially marginalized young women, to resist sex trafficking.

I asked Devineni exactly how much of an impact a series of comic books, however laudable and lauded, can have on resolving the entrenched social problems they address. It is a question he welcomes. He is a practical idealist who does not let himself get carried away by the winds of self-importance.

“There is a definite ceiling on what we can accomplish despite all the attention we’ve gotten, and all the downloads, and the street art in places like Dharavi, where our supporters make drawings of Priya on the walls. I work within a limited budget. We don’t politicize issues of rape and acid attacks. It’s all about empathy, about trying to create understanding for the victims. Trying to create a cultural shift is incredibly difficult.”

Having said that, he framed Priya’s place in the larger picture. “India is going through some remarkable and monumental changes in a short period of time. People’s views have not caught up with the speed that things are changing. What is clear to me from the protests that happened all over India after the bus rape is that we want things to change in our country. There were so many teenagers and young adults at those protests, people who will be the future leaders of India.


I was struck by how often he’d refer back to the Delhi bus atrocity that spurred his consciousness of gender injustice in India, and led inevitably to Priya. “What happened to Jyoti,” he said, “was kind of like the Selma of the civil rights movement. It’s four years now. People in India are still talking about it.”

Robert Hirschfield is a New York-based freelance writer whose work has appeared in Outlook India, Sojourners, and Matador, among other publications.