Americana: An Evening at the Muslim Community Center

Dear Imam, you are asking so much of us. You wish to break down the mistrust between Christian and Muslim Americans, and that is a fine and noble goal. But as I am listening to your well-thought out words, I keep having this flashback. It’s like going to a movie when the projector breaks and the last frame sticks to the screen.

I was on a Delta jet the morning of September 11, 2001; that’s one of my sticky frames. My flight landed in Cincinnati just in time for me to watch the second plane crash into the World Trade Center. No one I knew died that day, but a friend of mine, Cyndi, lost a brother, and the son of a friend of my mom was killed. I had to call my frightened twelve-year-old daughter at her elementary school to assure her that I was still alive.

Even though you are as appalled as I am at that horrific event, that sticky frame will always be with me, just as the Japanese bombing of Pearl Harbor stayed with my parents. I recall going to a Japanese restaurant here in town back in the 1980s and hearing an older couple get into an argument. The husband ended up stomping out of the place because he had fought against the Japanese in World War II. Made an impression on me, it did. I never wanted to be that man. That’s one of the reasons I accepted your invitation to attend this commendable evening of fine food and get-to-know-us fellowship.

The other reason is that I have never, ever, spoken to an identified Muslim-American! Chew on that for a moment!

Sure, I have read history and traveled to many countries, but never in this country have I had a conversation with a Muslim-American. And that’s at the heart of the problem, isn’t it? We natives don’t have much to draw on from our Muslim-American archives. It’s not like we can say, “Well, yes, 9/11 was a horrific event, but say, do you remember the long and glorious rule of Akbar?”

But this is a two way street, no? Given that so many Muslim-Americans are new arrivals to our country, it might be helpful and interesting if I share a few of my experiences as it relates to our knowledge of your religion.

It is 1961. I am kid dressed in a white shirt, blue necktie and navy-blue pants. Along with 55 other white Catholic boys and girls, I am learning to read. The nun asks us to open our Dick and Jane readers. We do. No one of sound mind disobeys a nun. 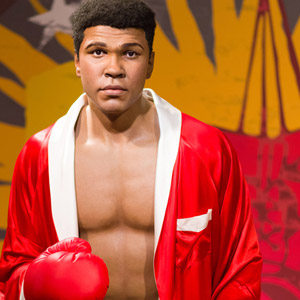 Despite a few high profile Muslims in recent decades—Muhammad Ali (​​above) and Malcom X (​top), for example— Americans have scant experience of direct interactions with Muslims within their communities.

Dear Imam, when I considered where to begin this narrative, I thought of those insipid books. Used since the mid-1930s, they have taught over 50 million Americans how to read. Why am I thinking of them now?

Imam, there were no kids named Mohammad, Khalil, or Daliya in those readers.

Muslims, at that time, did not exist in American history or culture. I had Jewish neighbors. I went to school with African-Americans. Hispanics picked our fruit. Jews, African-Americans, and Hispanics all have made impressive contributions to our nation’s history and culture. What’s a Muslim?

Consider this. My mom was born in 1919, eleven years before the construction of America’s first mosque. It was in Ross, North Dakota. Where’s that?

In 1964, barely 100,000 Muslims lived in the entire United States, a number that approximates the population of, say, Macon, Georgia.

For most of us over 50 years of age, our introduction to the Muslim people did not come from our American centric newspapers, magazines, or half-hour nightly news shows of the 1960s, but from history books. Dear Imam, you have just cited some of the impressive contributions that Muslims have made to world civilization, but such things, if taught at all in our schools, were overshadowed by a more important event.

It is 1964. I am still dressed in a white shirt, blue necktie and navy-blue pants. The nun is teaching about those Holy Wars, also known as the Crusades. “From roughly 1100-1500, Muslims and Christians fought for control of Jerusalem, the Middle East, and Western Europe....” Being good Christians, our class is ready to don the armor with the Christian symbols to battle the evil Muslim forces, all for the good of God’s earthly kingdom.

In 1826, Bishop John England of St. Mary’s Catholic Church of Charleston addressed Congress to refute some anti-Catholic sentiments expressed by President John Quincy Adams. His famous speech boldly proclaimed the beliefs of his faith while stressing its compatibility with republican virtues.

My dear Imam, that is exactly the case that I just heard you make.

Have you heard of Jackie Robinson? In 1947, he became the first black man to play in a Major League baseball game.

How about Sandy Koufax? To be sure, there were many skilled Jewish baseball players before Sandy, but he made national news when he refused to pitch a 1965 World Series game because it was scheduled on the Sabbath.

To this select group of American figures who did honor to their race and religion, we can add the name Cassius Clay, or better, Muhammad Ali. Here, finally, a notable Muslim-American bursts onto the national stage.

“I float like a butterfly and sting like a bee,” he often boasted, and then backed it up. With hands as fast as his tongue was glib, he charmed the nation. But he angered some when in 1964 he announced that he had embraced the Muslim faith. He changed his name from Cassius Clay to Muhammad Ali, and joined the group, “Nation of Islam.” Its spiritual advisor was Elijah Muhammad.

In 1967, citing his religious beliefs, Ali refused to be conscripted in the United States military. “I have nothing against the Viet Cong,” he said, speaking for many of my generation. He was arrested, found guilty of draft evasion, stripped of his boxing title, no longer allowed to fight in the ring. In 1971, after the Supreme Court overturned the conviction, he resumed his boxing career, but the skills that he once possessed never completely returned.

It was during the Civil Rights era of the 1960s, and its accompanying belief that African-Americans should reclaim their religious heritage, that the Muslim religion was introduced into our national consciousness.

One other key figure in our nation’s Muslim history, Malcolm X, deserves mention. Like Muhammad Ali, Malcolm joined the Nation of Islam. But later, when he became popular in his own right, a spilt between Malcolm X and Elijah Muhammad became inevitable. Shortly after Malcolm X left the Nation of Islam, he visited Mecca. Upon seeing the lack of racial discord among Orthodox Muslims, he returned to America with more moderate principles. On February 21, 1965, men from the Nation of Islam assassinated Malcolm X.

We now arrive at the last frame in my pre-9/11 newsreel, the 1979 Iranian hostage crisis. Muslims, upset at Western meddling in their country’s affairs, stormed the United States embassy in Tehran and held dozens of Americans hostage for 444 days. Diplomacy failed to secure their release. When a military rescue mission failed and American service men lost their lives, Muslims celebrated. There have been similar events in more recent decades.

When I began, I noted that you are asking a lot of us. I hope the vignettes I have just shared allow you to better understand our often American-centric perspectives.

In the past few years, I have traveled thousands of miles on our state’s highways with a mind to photographing our state’s collection of historic churches and synagogues. You may not know this, but to get people to move to this otherwise inhospitable area, the British granted the Carolina’s early settlers complete freedom of religion. Jews, Quakers, and French Huguenots heard the call, as did the Catholics. That story is worth a closer look.

Catholics, because they were perceived as being too aligned with England’s enemies, Spain and France, were not particularly welcomed in the original thirteen colonies. But after acquitting themselves during the Revolutionary War, they were more accepted. Not completely accepted, more accepted!

In 1826, Bishop John England of St. Mary’s Catholic Church of Charleston became the first person of such rank to address Congress. He did so to refute some anti-Catholic sentiments expressed by President John Quincy Adams. His famous speech boldly proclaimed the beliefs of his faith while stressing its compatibility with republican virtues.

My dear Imam, that is exactly the case that I just heard you make.

Thank you again for such an interesting and informative evening. Your words have moved my thoughts beyond those sticky frames. For that, you and I can surely say, “Thanks be to God.”