Americana: The Birth, Death, and Resurrection of the Southern Confederacy 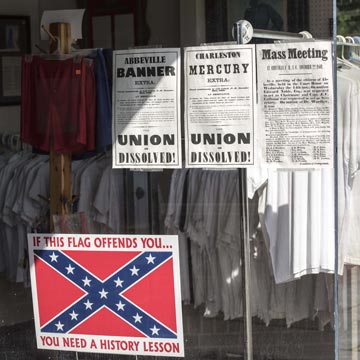 (Left) A sign in a store in Abbeville, South Carolina – a town that is often seen as the birthplace and the death place of the Confederacy. (Photo: Bill Fitzpatrick)

In an historic church built decades before electricity, I ran my fingers along the top edge of an old wooden pew. Do you feel the etchings in the wood, Clarence asked, and I said yes, I do. When the tattered and beaten men returned from the Civil War, a few learned their arithmetic here at Shiloh Methodist Church, kept track of calculations by carving in the pew. I nodded, my hands gliding back and forth across the aged notched pine.

My God, how miserable it must have been for these men. With youthful vigor, boyish innocence, and gray pressed uniforms they left their Southern homes, sure of a quick and decisive victory. Four long years later, some lesser number would limp home, survivors of a bloody war that had pitted American against American. Four long years later, a few arrived at this church, hoping to learn some new skills that might allow them to scratch out a living in the devastated South.

Devastated? Yes, it was all of that, due in parts to the horrific acts of the Union general, William T. Sherman. He wished to teach the South a lesson, and by slashing and burning his way from Atlanta to Savannah and then back into South Carolina, he achieved his goal. For the love of God, man, you have already won. Why are you doing this, often to innocent people? Where is your grace? Do you know that with every mile you are making a hundred new enemies, a huge collection of people who will never forget? Bastard.

Clarence continues to talk, but my mind jumps ahead to the 1890s, and a Confederate soldier’s deathbed. What are his final thoughts? Forty years have passed since the war, forty years since he etched his schoolwork into the pews at Shiloh Methodist Church. A noble man, his family might remember after he died, kind with his family and generous to the community.

But should we honor this man?

Why should we honor the soldiers who fought for the horrible institution of slavery?

Let those whose ancestors lost their lives in the Civil War make their case as I now wish to make mine.

Tear down those Civil War monuments.

Rename the counties, streets, and schools that bear their names.

Send the people who believe that “the ‘War Between the States’ was about ‘states’ rights,’” instead of slavery, to a finishing school. No, not the ones where people learn to sip hot tea with an extended pinkie and pursed lips. Send ’em to the place you go where you learn to finish sentences as in, “the Civil War was about the states’ rights to allow slavery.”

If you agree with me, be aware that you and I hold the minority view.

In 2011, when Pew Research pollsters asked, “What is your impression of the main cause of the Civil War?” thirty-eight percent of the respondents said the main cause was the South’s defense of an economic system based on slavery, a number short of the forty-eight percent who believed that the nation fought over a difference of interpretation in constitutional law, fancy talk for “states’ rights.”

White non-Southerners believed this in roughly the same proportion as white Southerners.

Thirty-nine percent of the black respondents believed that the Civil War was fought over states’ rights.

There is a once famous American story of a young newspaper reporter who gets called into the editor’s office. Legend has it the crusty old man lets the kid know that “Dog bites man” is not a newsworthy story. Bring me a story that begins, “Man bites dog,” he snarled.

After decades of searching, I have found my “Man bites dog” story. Thirty-nine percent of blacks whose ancestors were probably slaves believe, what?! How can anyone believe the war was about anything but slavery?

On December 24, 1860, South Carolina, the first state to withdraw from the Union, explained its reasons for leaving in the document, “The Declaration of the Immediate Causes Which Induce and Justify the Secession of South Carolina from the Federal Union.” The document’s first paragraph details its eight years of frustration:

The people of the State of South Carolina, in Convention assembled, on the 26th day of April, A.D., 1852, declared that the frequent violations of the Constitution of the United States, by the Federal Government, and its encroachments upon the reserved rights of the States, fully justified this State in then withdrawing from the Federal Union; but in deference to the opinions and wishes of the other slaveholding States, she forbore at that time to exercise this right.

Later in the same declaration:

The [federal] Government itself has been made destructive…by the action of the non-slaveholding States. Those States have assumed the right of deciding upon the propriety of our domestic institutions; and have denied the rights of property established in fifteen of the States and recognized by the Constitution; they have denounced as sinful the institution of slavery; they have permitted open establishment among them of societies, whose avowed object is to disturb the peace and to eloign the property of the citizens of other States. They have encouraged and assisted thousands of our slaves to leave their homes; and those who remain, have been incited…to servile insurrection.

What is not clear that the Civil War was about slavery?

The better question is to consider why so many people, even after we discount the obvious—ignorance, prejudice, and family ties to that hard-fighting Confederate soldier—believe otherwise. Blame, yes, we have someone to blame for this nonsense, and the guilty go by the rather innocent, innocuous name of the United Daughters of the Confederacy (UDC). From its inception in 1894 and into the 1960s, the UDC was the South’s premier social and philanthropic organization, an exclusive club where the elite women of the South gathered to “revere the memory of those heroes in gray and to honor that unswerving devotion to principle which has made the Confederate Soldier the most majestic in history.”

The central article of their faith was that the South had not fought to preserve slavery, that this false premise was an effort to smear the reputation of the South’s admirable leaders. Well, if you spread one lie, spread two or three. Abraham Lincoln was of modest intelligence! The Ku Klux Klan—why, all those boys are trying to do is maintain public order! If the ladies had just shared such nonsense over afternoon tea and finger sandwiches, damage would have been limited. But much like today’s National Rifle Association, they became very powerful and political, their influence even making its way into the South’s school systems.

The UDC, for example, lobbied Southern legislatures to ban the purchase of textbooks that portrayed the South in an ugly light, to great effect. By the early twentieth century, and with the encouragement of the UDC, most Southern states established textbook commissions to oversee and recommend books that provided a “fair and impartial” interpretation of the “War Between the States.” In short, the “Southern version” of history covered the truth like kudzu.

With my Northern upbringing, I was not exposed to such drivel in school. I was immune to this grand repositioning that the Confederacy cause was noble and just, its men chivalrous. Only the numerical superiority of the North caused the South’s defeat, a frame of reference called the “Lost Cause.” The late John Herbers, an award-winning columnist who wrote for the New York Times, once shared his early childhood days in Mississippi during the 1930s and 1940s.

The Lost Cause was one of the main themes my grandmother used to talk about: ‘Slavery was nothing to do with the Civil War—we had a cotton economy and [the North] wanted to dominate us.’ It was an undisputed topic.

It is still an undisputed topic for many Americans. The lessons learned from grandmothers, teachers, and the need to protect the reputations of ancestors, are enough to explain our Pew Research numbers. Some day in the future, the streets will be renamed and the statues to the likes of General Robert E. Lee will come tumbling down. But that day will not come soon enough and it will not come in my lifetime.