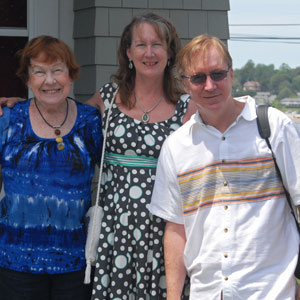 The generation that came up with “Don’t trust anyone over 30 years old” is now more than double that age and getting older. A look at aging and the status of elders throughout American history.

My mom is now 95 years old. Still lives alone. Still wears dashing clothes. Still works out at the gym. Still drives a car. Still reads without glasses. Still types 100 words a minute and she talks faster than she types.

If you decide to visit my mom, you will have a splendid visit, unless you bring up the topic, “caring for the elderly.” What? No! Mom wants to live alone, and will tell you in a skinny minute that she has no intention of imposing on her children, or worse, checking herself into a retirement community. “Retirement communities are for old people!” she will snort. My dad often said the same thing, too. He died young—he was just 87—and when I got the news of his premature death from one of my sisters I was surprised, because the previous week, he had climbed a ladder to fix a few shingles on the roof, played tennis with his friends, and worked out per his usual custom at a local gym.

The source of my mother’s anger toward caring for the old is not with her children, but with her long-dead mother. See, when Mom graduated from Torrington (Connecticut) High School in 1937, she was Class Valedictorian. As a result, she had her pick of a few jobs, including one in Washington, D.C. But when her mom said, “You can’t go, you have to live in Torrington and take care of me until I die,” my mom did as she was told. She is still angry. Still talks about how her mom got in the way of her tooling down the road to D.C. in search of the American Dream.

But enough about my mom. In 2030, a staggering 20 percent of our population, or 70 million Americans, will be over 65 years old. What will we do with all of these old people? How will our not-always-kind-to-old-people culture influence our actions and policies? Why do we seemingly venerate youth, and not our elders, anyway? And oh, such delicious irony (!) – most of our aging population will consist of Baby Boomers, the very generation that during the 1960s wore big red buttons that said, “Don’t trust anyone over 30!”

This may come as a surprise, but our first settlers, the religiously conservative Puritans, actually venerated the elderly. One of the most influential ministers of that era, Increase Mather, writes, “If any man is favored with long life, it is because God has lengthened his days,” that “gray heads were wiser than green ones,” that “to treat Aged Persons with disrespect- ful and disdainful language only because of their age, is a criminal offence in the sight of God.”

One reason old age was venerated is because it was so rare. In 1790, less than 2 percent of the population was over 65 years of age. During this agricultural era, the elderly controlled the power and wealth, and their sons waited, impatiently, to inherit the farm. A minister of the era advised elderly parents to hold back “substance” for themselves because, “Better it is thy children should seek to thee than that thou shouldst stand to their courtesy.” So why the shift from venerating the elderly to wearing red buttons?

Conventional wisdom holds that “modernization,” a period of time that aligns with the Industrial Revolution of 1880-1920, caused the seismic shift in our family relationships. The theory goes something along the lines that we Americans are a restless lot, eager to leave our homes and move to the next opportunity, like my mom. Modernization made such opportunities more accessible. But as social historian David Hackett Fischer argues in his 1972 book, Growing Old in America, in other market-driven economies—Japan, for example—respect for elders is not necessarily lost in thriving democracies.

Instead, Fischer argues that America’s about-face in attitudes toward the elderly predates modern- ization, and has more to do with shifting demo- graphics. As men began to live longer, their children became increasingly impatient to inherit the wealth. Unlike Europe, a place still dominated by rigid, centuries-old aristocratic institutions, America had far fewer “old rules,” and as a result, the notion of the rugged, self-serving individual gradually took hold. If you were chafing under your father’s control, you could leave to find your own opportunity. “Someone else,” such as the government (social programs for the aging began to appear around 1900) could take care of Mom and Dad.

To historically place the time when he believes respect for the aged turned, Fischer sets the stage by noting that respect for our elders was so great in early American history that even young men, wishing to be seen as old and learned, dressed as old men!

During the seventeenth century, and even more so in the eighteenth, male fashions flattered age; that was one of its primary purposes. The intent was to make young men older than they actually were. The cut of men’s clothing had a similar purpose. During the eighteenth century clothes were cunningly tailored in such a way that the shoulders were made narrow and rounded, the hips and waists were actually broadened, and the backs of the coats were designed to make the spine appear to be bent by the weight of many years.

But between 1790 and 1815, men’s dress was revolutionized…Wigs were replaced by hairpieces and toupees, which were designed to make old men look young again. The white powder that had been used to give men the appearance of age, yielded to hair dyes, tints and preservatives. The cut of the cloth was designed to flatter a youthful figure.

Fischer notes that during the early part of the 1800s, new abusive words were invented to describe disdain for the aged. Codger (1796) came to mean “a stingy miserly old fellow.” Old goat meant a lecherous old man, geezer an eccentric old man, galoot an uncouth old man, fuddy-duddy a pompous old man. At the same time, respectful words for the elderly, such as grandsire, progenitor, and forefather, exited.

Finally, we should not leave the nineteenth century without mentioning Henry David Thoreau, one of the most iconic and influential names in American history and philosophy. His essays on “Civil Disobedience” would later inspire Mahatma Gandhi and Martin Luther King. In 1845, and well before “modernization,” he retreated to Walden Pond to consider the essential truths of life.

I have lived some thirty years on this planet, and I have yet to hear the first syllable of valuable or even earnest advice from seniors. They have told me nothing and probably cannot teach me anything.

I am one of the younger Baby Boomers, so I was on the fringes of the various social revolutions of the 1960s. It was my older (metaphorical) sisters and brothers who demanded sexual freedom, racial equality, and the end of the Vietnam War. But what I remember most about the decade is the disrespect we showed our parents, those of the Greatest Generation. We grew our hair long when they asked us to cut it short, smoked our pot as we played our protest music, mocked the very dream our parents had fought and died for—a nice home, a couple of cars and a better life for their children—by “dropping out” and living in communes.

In another decade or two, we will be the old ones, in numbers unprecedented in world history. We will redefine what is meant by old age for better or worse, of that I am sure. If we were to shove aside our Botox, dyes, and implants, and simply accept our age, why, that might be our greatest legacy! But that is not going to happen, because too many of my generation still remember the red buttons that read, “Don’t trust anyone over 30 years old.”