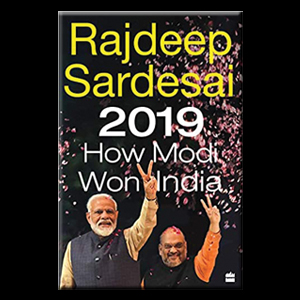 Rajdeep Sardesai’s 2019: How Modi Won India (available from Audible and HarperCollins India) got me thinking about the world’s two largest democracies. Of course, they have been compared for decades: populous multicultural nations that represented diversity across religion, ethnicity and class and still held democratic norms close, and practiced secularism in name and deed. In more recent times, this column has discussed the comparisons evoked by Trump and Modi, two bombastic, larger-than-life nationalist populists who made visceral appeals to the aggrieved majority in crafting electoral successes, representing sea-changes for politics in their respective countries.

But with Trump’s loss in the 2020 election and the control of the executive and legislative branches by the Democrats, it is now possible to compare the Democratic party to India’s ruling party, the BJP, even if the comparison appears counterintuitive at first glance. In his book, Sardesai outlines how the Modi juggernaut ascended from strength to strength since their first victory, to win the 2019 election decisively, even crushingly, leaving the Congress in the wilderness. In their years in power, they have aggressively changed and reshaped policy, procedure and institutions alike, a claim that some are making about the new Democratic majorities in the U.S. Congress and the Presidency.

Sardesai can hardly be called a BJP sympathizer; indeed, he’s been a critic. But in the book he is even-handed, as should be expected from a journalist of his caliber (and, I should add, a fellow Xavierite from Bombay). Filled with on-the-ground descriptions of the campaign trail, the events and personalities that led up to the massive 2019 victory, Sardesai outlines how the BJP went into the 2019 election with the intent to leave no stone unturned, to engage in every act permissible (and some impermissible), to flood the market with money, media, fervent supporters and savvy, catchy ads, and to woo promising opposition politicians to switch to their side in order to flip a seat (Jyotiraditya Scindia in Rajasthan, for one). Almost despite himself, Sardesai gives grudging admiration where due—to a campaign that allowed nothing to stop it from achieving a mammoth victory.

At the same time, he is bemused at Rahul Gandhi’s leadership (or lack thereof) of the Congress, outlining episode after episode where Gandhi completely underestimated the BJP juggernaut until his party was left in the dust. A race between a Ferrari and some bicycles, as Arundhati Roy once remarked.

Whereas Congress once dominated the media, channel after channel now loudly presents the BJP viewpoint and social media is dominated by it. Where the Congress once had an army of on-the-ground workers, today the BJP has a much bigger and better organized army of fervent worker-believers. Whereas once big business tended to remain out of the political spotlight, today it eagerly donates 90 percent of its money to the BJP, allowing the latter to outspend the Congress by an enormous amount. Here, some point to parallels with the 2020 U.S. election, where the Democrats raised far more money than the Republicans, outspending and outsmarting (through savvy media ads and social media) them at many turns. In addition, the tech world donated disproportionately to the Democrats, allowing them to further fund candidates and support their messaging.

Sardesai’s book is not just an eye-opening look back at an uneven election war. It also touches on the freedoms lost, books censored, arrests unjustly made, opposition silenced and political institutions being compromised in India today. Its message is that eventually, unchecked majorities whether in politics or business are bad for democracy and its institutions. And indeed, India has slipped in “freedom indexes” to “partly free” (Freedom House) and “electoral autocracy” (Sweden’s V-Dem Institute). As we see freedom of speech compromised in the U.S. by the tech industry in never-before ways and the obscene power and enrichment of tech moguls, one waits to see where the U.S. is headed. Because even if the curbs against freedoms today may seem to be against those we abhor, tomorrow they could come for us.