Tribute: He Will Be Greatly Missed! 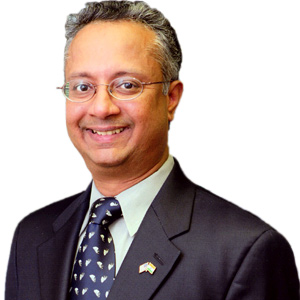 Dr. Narsi L. S. Narasimhan, or simply “Narsi” to most who knew him, was amongst the few who have had an outsized impact on the Indian community of Atlanta. As founder of the Indian Professionals’ Network (IPN), he was a key liaison between professionals, CEOs, entrepreneurs, and officials. His sudden death on account of a massive heart-attack has left many in shock… a life cut short in its prime.

He Will Be Greatly Missed!

Going by the measure of the size of one’s Rolodex, Dr. Narsi L. S. Narasimhan was indeed a rich man!

Narsi’s famous database consisted of well over 17,000 contacts. These, mind you, were not impersonal contacts, such as what many salespersons or companies collect. It is safe to assume that Narsi knew each of them at least to some degree. With many more, he had vibrant engagements. Hardly a few months would pass by when I wouldn’t call or email Narsi to make a connection, or the other way round—where he would be the one initiating an introduction.

This IIT (Varanasi) brainiac, one could say, used his Ph.D. in management sciences (from the University of Texas) to the hilt in crafting an enviable networking machinery. It’s not just that he harnessed contacts and consolidated them in a painstakingly detailed database, but also that he was generous with it. Indeed, when mulling upon some of the key qualities that set Narsi apart, I came up with the following: inclusiveness, self-effacement, selflessness, and generosity.

There was not a single exclusionary bone in this man. In fact, to my chagrin, at one time I felt that Narsi should be more discriminatory with his resources—and not facilitate a character who many felt was an all-round nuisance, thanks to that man’s penchant for baseless lawsuits. To which his reply was roughly the following: “Parthiv, I don’t think of the IPN database as my personal property. It’s a community resource, so it’s an open book. I can’t discriminate against anyone.” No matter what the cause or the people behind it, if you asked him for help, you could rest assured you would get it.

“Helping others” is often just a trendy mantra for many. But Narsi truly lived by it. Mustafa Ajmeri, another prolific community friend, recently attested to Narsi’s trait of selflessly offering his time. Ajmeri recalled when Narsi helped him get started with emailing. Not only did he set up Ajmeri’s email account, but also provided the training to make him self-sufficient with it and other technology needs.

Over the years I have heard similar stories from quite a few about how Narsi was the least bit concerned about his bottom line. Even way back in January 2001, for a spotlight article published in Khabar, when Rajesh Jyotishi asked him “What motivates you?”, his answer was, “I sincerely want to help others.” Anyone can say those words, but Narsi actually lived by them.

With people always reaching out to him, one would think Narsi would have airs about him. But instead, self-effacement was his defining trait. Despite his influential role amongst some of the top executives of the region, he always carried himself as a chum. Always sporting a smile and a joke, his easy personality belied the fact that he was a honcho in demand. Whenever I marveled at the range of his influence, he never failed to retort, “Yes, but I am not the one who reaches an audience of thousands of readers every month!” I knew perfectly well that his response glossed over the fact that it was he to whom the community reached out first when they took on big events or enterprises.

Despite my cordial relationship with Narsi, I remained a somewhat distant spectator to his life’s unfolding. For the rest of this tribute, I turn over the pen to those who knew him—personally or professionally—better than I.

May God bless this soul, whose life on earth was most unceremoniously and unexpectedly snatched from us.

[Parthiv N. Parekh is the editor-in-chief of Khabar Magazine.]

A Volunteer, Leader, and Above All, a Great Doer

Above all, Narsi Narasimhan was a great doer. And he did everything from printing name tags to fundraising to introducing well-known speakers to organizing events. This was remarkable for someone who was also a true academic scholar.

Narsi had the natural inclination and ability to lead and organize. In addition to organizing IPN, he led the CIO Academy, the Kettering Executive Network (KEN), and, most recently, a series of leadership sessions at the Indian Consulate.

I met Narsi soon after I came to Emory University in 1991, and we became very good friends. He also became a key supporter of the Sheth Lecture on Indian Studies hosted by Emory University. He even volunteered to go to the airport and welcome the new MBA students from India. And this was not limited to Emory University, as I found out later. Volunteering was his second nature. 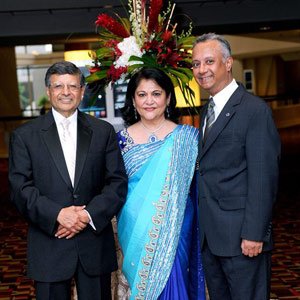 Jagdish and Madhu Sheth with the late Narsi (Photo: Bytegraph)

Only a month ago, at the Fulbright Scholars Reception hosted by the Indian Consulate, I thanked Narsi for waking me up every morning at home. He gave me this puzzled look. I smiled and explained to him that he had gifted me an alarm clock as a guest speaker at the national IPN Convention hosted in Atlanta in the mid-90s, and I told him I still use it to wake up every morning.

Narsi worked tirelessly. The energy he put behind nurturing and growing KEN was simply extraordinary. I still remember the breakfast meetings when the network had less than 100 members. Today, it has surpassed more than 1,300 members. He knew everyone, and everyone knew him.

Narsi simply relished making introductions. He really enjoyed networking and connecting people. At the same time, he was fiercely independent. He did not shy away from expressing his views or providing advice.

I will miss Narsi. It is very hard to lose good friends. My only comfort is that, while his body and soul have departed, his heart will be always with us.

[Dr. Jag Sheth, Professor of Business at Emory University, is a renowned scholar and internationally recognized thought leader, and a sought-after speaker in Atlanta’s Indian and business communities.]

An Ace Networker and an Institution Builder

Narsi was the first person I connected with in Atlanta, 23 years ago. His response was welcoming and heartwarming from the very first time I reached out to him. He helped me and many others grow our network and business.

Narsi’s actions were less motivated towards personal gain, and more about building a stronger foundation for our community. He founded or was otherwise involved with various organizations like IPN, Atlanta Olympics, India American Cultural Association, Asian Pacific American Coalition, Georgia Indo-American Chamber of Commerce (GIACC), USA India Business Summit, and KEN. He was always there with a helping hand and professorial advice. It was interesting to see his rustic, small town leadership style, and his willingness to help. I would often have a different opinion with his way of functioning and managing things. He would reply, “Anurag (my full name) chalta hai, let’s look at the big picture.” Narsi truly had a heart of gold. 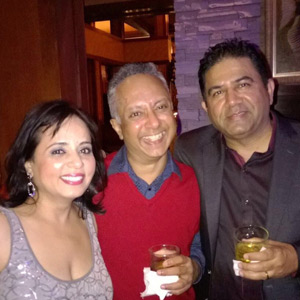 With Kiran and Ani Agnihotri

In 1996 we worked on the first national conference of the Network of Indian Professionals (NetIP) under the banner of IPN. This was a well organized conference that was put on by a young and dynamic team of leaders mostly identified by Narsi. The success of the conference was not enough for Narsi—he proposed that we donate the few thousand dollars of profit from the event to Raksha, a local nonprofit. This was one of the many visionary decisions made by Narsi.

Dr. Narasimhan was methodical, passionate, apolitical, and a secular man. He would treat everyone equally. More importantly, he was a doer, always lending a helping hand without asking much in return. He was very cooperative and avoided confrontations. Narsi considered me as one of his protégés and I will always be proud of this relationship. We were a great team, always supporting one another.

His sudden passing was a rude shock. Dr. Narsi Narasimhan’s legacy, as an iconic pillar of the Atlanta community, will always remain. To me, Narsi was an ace networker and institution builder. Hopefully, we will be able to carry forward his legacy and vision.

[Ani Agnihotri is President and CEO of IIIrd Millennium Technologies, Inc., and Founder and Managing Partner of US India Business and Research Center (USIBRC).]

Leadership Through Decentralization of Power

“If you want to get something done, give it to the one who is doing a lot already.” These are the kind of nuggets that Narsi was known for. His advice was real and not cluttered by being politically correct. A man of the community, Narsi was an omnipresent figure at some of the most prominent Indian and Asian events in the area. His reach extended to some of the most influential leaders across all disciplines. As founder of the highly successful IPN, he was a pioneer in the community in decentralizing power. He never said no to those willing to get involved. I was fortunate that he took me under his wing and taught me what he knew best—scalability and community service.

He taught me early on that if you want to start a company, make sure that your infrastructure is solid and can be scaled. He often said that as the CEO of the company, your job is not to be the boss but to do all the “non-sexy” things that nobody else wants to do. Humility was ingrained in his being. Although an influential leader in his own right, he was quick to introduce anyone he was around with by highlighting some of their most notable accomplishments. Dr. Narsi lived the words of HDH Pramukh Swami Maharaj, the spiritual leader of BAPS Swaminarayan Sanstha, “In the joy of others lies our own, and in the progress of others abides our own!” 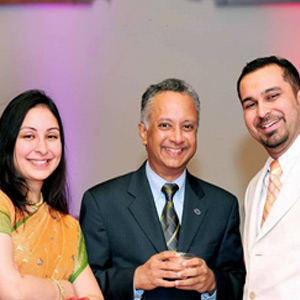 “Okey doke. Send me an email.” This was his modus operandi. His ability to send a multitude of personalized emails delivered measurable results and created unparalleled value for all involved. He had the unique ability to remain impartial and be valuable to all political parties and candidates.

I have worked with him on many events ranging from attending the Asian Pacific American Council annual gala to events organized by the German Chamber, World Trade Center, and even an accidental rave at the Philips Arena. Amongst the most notable that we had organized together were the famous “Samosa and Chai” events (so coined by Narsi to promote networking at the GIACC). One of his claims to fame was the historic signing of the Memorandum of Understanding between GIACC and the Georgia Ports Authority during his presidency of the organization in 2008.

He was a mentor, a friend, an older brother all in one. He visited me occasionally, not as much to meet me but to spend time with my children, who were always excited to see him. We will miss Dr. Narsi. In the words of a Hindi adage, “Marke bhi kisiko yaad aayenge, kisi ke aasuon mein muskurayenge” (“that we would be remembered even after death, that we would smile through somebody’s tears”). These words certainly ring true today as I think of my dear friend and mentor upon his passing.

[Ritesh Desai is an entrepreneur, Vice Chair of the Georgia Equal Opportunity Commission, and Director of Public Relations at BAPS-Atlanta. Through his political outreach he has helped build bridges between the Indian community and legislators, mayors, and the governor’s office.]