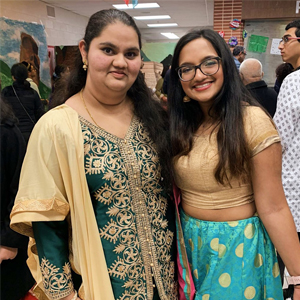 A lot has changed from the ‘70s and ‘80s in how growing Indian-American generations experience their identity. And yet, some struggles remain the same across the decades. Through it all, there is one ace up the sleeves of each new generation that helps them negotiate their two cultures.

For some, Lilly Singh may be just another Canadian YouTuber, but for me, she stands as the figure that opened the door to my identity as an Indian American. As a child, it was easier to process my bicultural life by neatly dividing it into two worlds: an Indian world at home with my family and family friends, and an American one at school and in public.

[Left] The author, Bhavana Kunnath (L), with a friend, Maria Ninan, at her school’s International Night.​

It was not until I began exploring the realm of YouTube with my friends that I came across other Indian Americans who had struck a balance by merging these two worlds into one solid identity.

In the ‘70s and ‘80s, diversity seemed to be a disadvantage in the eyes of Indian American adolescents. Fitting into any one category was difficult in America’s monochrome society, and people knowledgeable about Indian culture and cuisine were hard to come by. Parents who felt the pressures of this cultural disconnect sometimes suppressed their Indian background. Some even went so far as to prevent their children from learning their mother tongue to smoothen the transition into American society. On the other side were those who doubled down on leading a very traditional life regardless of how alien it may have seemed to their American neighbors.

At the time, many Indian American kids found themselves to be the only ones who looked like them in their classes, and often left desi culture at the doorstep when they went to school. After all, digesting dal and rich family traditions was difficult to do when apple pies and cookie-cutter suburban bliss were the norm. The cost of identity was simply far too high at a time when the names of Michael Jackson and Madonna were heard far more than those of Mumtaz and Mahesh Bhatt, and that too at an age when “otherness” was too painful a rebuke for young minds to cope with.

In a 2004 article in this magazine titled, “Growing Up Indian in America,” by Deepa Agarwal, financial consultant Arp Trivedi described his experiences with conformity in the ‘70s saying, “I tried hard to be an American. Nothing about me—my clothes, my accent, my eating habits and even the movies I watched—would give away the Indian influence.” This desire to conform was rooted in the virtual nonexistence of an actual Indian community that could guide children through their exploration of their own heritage.

The clusters of Indian convenience stores, dance and music classes, and cultural centers that are prevalent now were nowhere to be found, making it difficult for Indian Americans to develop a sense of identity. In the same article referenced above, IBM Marketing Manager Swati Fuller admitted that without a support structure, “it was very hard to retain any of the Indian religion or culture.”

Of course, America has come a long way since then and, as an Indian American teen growing up in 2020, it seems I cannot go down any street in my neighborhood without seeing signs of Georgia’s vibrant Indian community. Growing up I spent most weekends at the many temples in Atlanta, taking Carnatic singing lessons, learning dance routines for the many Telugu association events, or simply stopping by an Indian grocery store with my mother.

When I attend my high school’s International Night, I do not think twice about how comfortably I am able to navigate through the diverse crowd in my chudidhar gesturing with my henna-covered arms even as my non-Indian friends are overwhelmed by the sheer force of the representation of Indian culture there.
In recent times, more and more shows on Disney and other channels have an Indian character as a nod to diversity. While these depictions are rarely accurate, at least they are there—they allow me to begin to see myself in mainstream media in a way so many Indian American teens before could not. Being one of the only two Indian students in my elementary school class was never easy—nor was knowing that who I am does not really align with the majority of my class.

Nonetheless, I have figures like Lilly Singh and Hasan Minhaj to look up to, to help me process and bridge the differences. I can take for granted my knowledge and appreciation for Indian culture as well as the Indian community here because I have grown up walking down a path carved for me by the many Indians who came before.

However, even now, the path of Indian American youth bears quite a few of the obstacles my predecessors faced four or five decades ago. As diverse as America is now, it is still not quite as accepting as it could be, and being an Indian American does not come without its trials and tribulations. The number
of students with names that are “difficult to pronounce” has increased— but so has the number of Indian American students who resent their beautiful traditional names and feel the need to hide them behind Americanized versions.

The presence of a strong Indian community in cities like Atlanta has made it easier for Indian Americans to take pride in their Indian heritage, and yet so many Indian American teens still feel the pressure to conform, to Americanize every external aspect of their lives.

Even as the Indian community has adapted to the times, the challenges Indian American youth face have taken different shape as well. The hard border between Indian culture and American culture experienced by previous generations no longer exists—but balance in a bicultural environment has become even more elusive. As my American friends show me their new henna tattoos or talk about an Indian recipe they tried last night, I have to wonder: where do the a propriated versions of Indian culture end, and where does actual Indian culture begin?

While those who live in less diverse areas struggle with connecting to their Indian identities and battling “otherness” just as teens in the ‘70s and ‘80s did, those in more diverse areas feel the pressure to preserve Indian traditions—whilst adapting themselves and their traditions to fit the American mainstream. While the earlier generations struggled to fit into a category, Indian Americans now are fight-ing to define themselves outside of categories that limit or undermine their achievements.

At a time when colleges and companies alike seek to fill diversity quotas, Indian American teens feel more pressure than ever before to put certain aspects of their culture on display. At the same time, influencers make appropriation fashionable and comedians are quick to satirize the Asian community. The only options that seem to be available then are to accept being made the butt of jokes in the name of gaining acceptance or standing out when neither is truly respectful.

Even when pressured to take the path of least resistance and conform or caricaturize, many Indian American teens continue to make their contributions to the communities and paths made by earlier generations. Whether it be on Tik Tok, Ted-Ed, the voting booth, or the offices of Netflix, Indian Americans are making their grievances heard and challenging the stereotypes that are so prevalent in America.

It seems this ability to turn biculturality into a source of strength and motivation is the thread that connects the Indian American youth of then and now.


Bhavana Kunnath, a rising senior at Gwinnett School of Mathematics, Science and Technology, is the Editor-in-Chief of Infinitas, the school’s literary magazine. She is currently an intern with Khabar magazine, and can be reached at kunnathbhavana@gmail.com. To comment on this article, please write to letters@khabar.com.