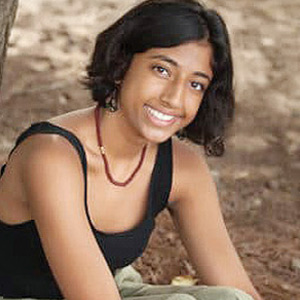 (Left) Ahalya Ramgopal was included in Atlanta INtown’s “20 Under 20” list.

AHALYA RAMGOPAL, in her graduation speech at The Paideia School in Atlanta, talked about what it was like to work at a local Indian restaurant, where there were only two Indian employees—although in her case, at least initially, she was an ambivalent Indian. The 2019 high school graduate is now a freshman at Wellesley College in Massachusetts.

When I started working at an Indian restaurant two years ago, I never expected to be one of only two Indians on staff. I didn't even expect to work in an Indian restaurant in the first place—in fact, given my eagerness to repress my Indian identity, I would've preferred not to. But none of my other job pursuits worked out and with many rejections in hand, I accepted the one job offer I had.

The only thing I can confidently say I know about India and its culture is its food. One thing I once knew was the language. Growing up in New Delhi, my first words were in Hindi. Yet, somewhere between the moving trucks, or the 19-hour flight, or maybe during the layover in Amsterdam, or while making macaroni art in kindergarten, I just forgot it. All of it. My five-year-old brain managed to remember her stuffed toy but lose an entire language. My parents, alarmed I'm sure, became insistent that their food, my food, remain familiar to me. During lunch periods, I'd reluctantly shove pieces of roti and daal down my throat, all while bitterly eyeing my friend's square slices of pizza.

When I came to Paideia in Junior High, I became more comfortable being myself because here, as we like to tout, it's cool to be different. I made fun of those appropriating my culture of bindis and naan, even as I did the same. Like the hipsters I mocked, I ignorantly followed the trend—until I began to work at Chai Pani a couple of years ago.

At school, I was used to being looked at as the cultural expert. At Chai Pani, the "All-things-Indian" expert was a white guy—from South Carolina. He was the one who taught us about India through mandated cultural trainings, which I thought would be refreshing—but was actually humiliating. I was being schooled about fairly obvious parts of MY culture! By a white guy, no less. Then this guy, Daniel, would start speaking to customers in fluent Hindi as I sat there, aghast. Him? Really?

Something in me snapped. Embarrassment morphed into determination to learn more, to pick up Hindi again, to embrace desi music, and to get involved in conversations about race and identity at Paideia.

The food I serve, Indian-Southern fusion cuisine, represents my identity, but at work, a multitude of diverse American experiences are celebrated. In the mornings before a shift, I flit in and out of the kitchen dancing to the Latin Pop music the Mexican cooks play and eating their specially made homemade chilaquiles for breakfast. After a shift, I can sit down and savor a hot vada pav from the same kitchen, while enjoying Hindi pop music. It's a microcosm of the best this country can be. Heading off to college, I'm excited to take part in and give back to communities embodying the values Chai Pani and Paideia have taught me—being proud of who I am, remaining curious, and celebrating and reveling in our differences.

Reprinted with permission from The Paideia School Newsletter (June-July 2019).