By Anandhi Rajan, with related news by Suzanne Sen
September 2018 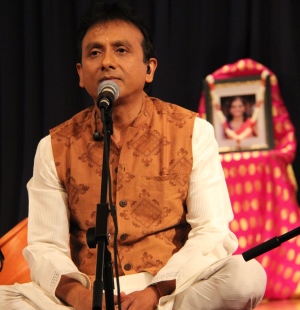 Atlanta’s Carnatic music lovers were treated to an enthralling and soul stirring concert by the renowned Carnatic singer Sri. P. Unnikrishnan, who is also a well-known and award winning playback singer for the South Indian movie industry. His concert at the Hindu Temple of Atlanta on August 12, 2018 was a fundraiser for the Sankara Nethralaya OM Trust, a medical charity committed to providing cost-free eye care for underprivileged individuals in India.

The concert began with a dedication ceremony to a local physician, Dr. Uma M. Kumar, one of the major donors to the SN OM Trust, who passed away at age 59 from a cerebral hemorrhage the week before the concert.

Sri. Unnikrishan then held the audience’s rapt attention for almost 3 hours as he rendered melodic and stunning renditions of well-known Carnatic music kirtanas as well as devotional songs requested by the audience. The concert concluded with Dr. Ram Sriram proposing a vote of thanks, recounting the strength of the artiste, both the technical prowess and the ability to replicate the original devotion of the various composers.

Accompanying the accomplished vocalist were three very talented musicians in their own right—Sri. Kamalakiran Vinjamuri on violin, Sri. Vignesh Venkatraman on mridangam and Sri. Sowmiya J. Narayanan on the ghatam. These three artists are all NRIs from the United States and demonstrate how NRIs can meaningfully contribute to the musical traditions of Carnatic music, even as they live and work in the United States, as they also garner recognition for their musical talents in competitions held in India and the United States.

Protests and boycott threats were encountered before the concert

There was a huge uproar going on in Tamil Nadu around the time of the concert, saying that Christian missionaries were using Carnatic music as a platform to facilitate conversion of Hindus to Christianity, and recruiting popular musicians to help them. Protests were held in Coimbatore against some Carnatic musicians who have sung Christian hymns or have been seen with Christians. The artist Unnikrishnan is one of those being accused of colluding with the missionaries. Threats have been made online by many, in particular by a man named Ramanathan. The two primary issues: the first was over a Hindu singer choosing to sing in praise of gods of other religions and the second was the appropriation of Carnatic music by other communities.

Singer T.M. Krishna responded, “We Carnatic musicians have fed this extreme Hindu fever over the years and today it is coming back to hurt us. I hope we learn from this experience, reflect and realize that Carnatic music must transcend religions and beliefs in actual content and not just in superficial verbal platitudes. We cannot succumb to these bullies and become even more conservative. I support any musician who wants to sing Christian, Islamic, Buddhist, Jaina and of course atheistic and nonreligious compositions. That’s the direction this art form should take.”

"This kind of bigotry is endless," points out Swarnamalya, a dancer and dance historian. "Appropriation is something that has happened over time and even a Muthuswami Dikshitar whom we sing endless praises for, has composed songs in Sanskrit and Telugu based on Western notes. This later came to be known as 'Nottuswara Sathiya.' Do we not call that genius?" she asks. She continues, "I think it is the atmosphere we live in that is heightening all this. We have become ultra-sensitive and perceive some kind of offence on our culture, making us unnecessarily defensive."

This concern spread to the U.S., and much happened for a few days leading to the Unnikrishnan concert. The concert organizers received many phone calls threatening boycotts and protests. Some called asking that the concert be cancelled. It was really a sad situation; however, it was decided to continue with the concert. Unnikrishnan had performed in Atlanta in 2007; this 2018 concert was a fundraiser for a charity in India.

'Traitors of Hinduism': Carnatic singers in TN threatened by right-wing ...
Aug 10, 2018 - Over the last week, Carnatic musicians in Tamil Nadu have been targets of a ... Internet users have descended on their Facebook pages, taken over ... Bby Jayashri, Nithyashree, Aruna Sairam, OSArun some of them. ... He further pointed out that Carnatic singer TM Krishna had performed at a church. On ...
https://www.thenewsminute.com/article/traitors-hinduism-carnatic-singers-tn-threatened-right-wing-fringe-groups-86332

More Threats and Warnings in Tamil Nadu to Carnatic Singers Who ...
Many mainstream Carnatic artists who have sung Christian hymns or have ... O.S. Arun and the 'head' of an organisation called RSSS Coimbatore. .... Later in the month, Ramanathan was stabbed in the hip by two persons on a motorcycle. ... The musician could have easily clarified his own position about it, but he kept ...
https://thewire.in/communalism/communal-campaign-threats-carnatic-music-artists-ramanathan-rsss

Discordant note in the world of Carnatic music - The Hindu
Aug 10, 2018 - Cities; Bengaluru · Chennai · Coimbatore · Delhi · Hyderabad · Kochi ... Arguing that the growing influence of the BJP and the RSS was being felt in all ... He has performed at the Loyola College church. ... This led to attacks on other singers who had sung songs of other religions. ... Fishermen stage protest ...
https://www.thehindu.com/news/cities/chennai/discordant-note-in-the-world-of-carnatic-music/article24648218.ece