Home > Magazine > Cover Story > A Superhuman Feat to Save Soil

A Superhuman Feat to Save Soil

By Editorial Staff with Inputs from ISHA Foundation 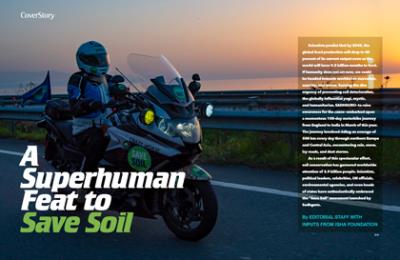 Scientists predict that by 2045, the global food production will drop to 40 percent of its current output even as the world will have 9.2 billion mouths to feed. If humanity does not act now, we could be headed towards worldwide starvation, anarchy, and worse. Sensing the dire urgency of preventing soil deterioration, the globally influential yogi, mystic, and humanitarian, SADHGURU—to raise awareness for the cause—embarked upon a momentous 100-day motorbike journey from England to India in March of this year. The journey involved riding an average of 500 km every day through northern Europe and Central Asia, encountering rain, snow, icy roads, and dust storms.

As a result of this spectacular effort, soil conservation has garnered worldwide attention of 3.9 billion people. Scientists, political leaders, celebrities, UN officials, environmental agencies, and even heads of states have enthusiastically embraced the “Save Soil” movement launched by Sadhguru. 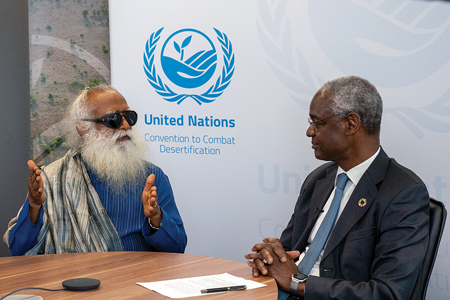 A few years ago, at a UN agency, Sadhguru was asked, “What are the three most important things that we need to attend to?” He said, “Soil, soil, and soil!”—because soil is a meta-problem underlying a plethora of other problems.

“If we do not save soil in the next 20 years, we will be a very regretful generation,” cautions Sadhguru, who has had a massive impact on environmental issues with projects such as “Rally for Rivers” and “Cauvery Calling,” the ecological movements to revitalize India’s rivers through tree-based agriculture, which have resulted in the planting of 62 million trees. 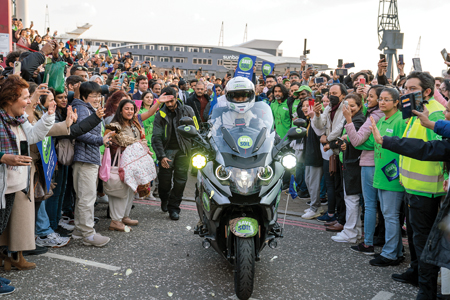 Why is saving soil so crucial and urgent? For millennia, life on earth has been sustained by a thin layer of fertile soil on the earth’s crust. Soil is a highly sophisticated living ecosystem and among humanity’s most precious non-renewable geo-resources. It supports agriculture, which accounts for 95 percent of our food. It absorbs, filters, and regulates the flow of freshwater bodies. It also plays a vital role in the mitigation of climate change and decreasing greenhouse gas emissions into the atmosphere. 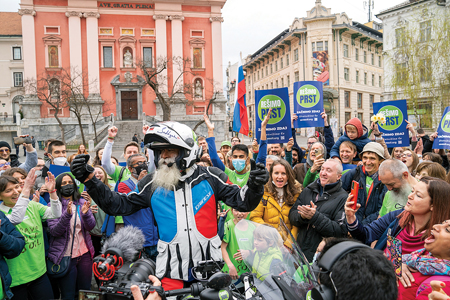 But, due to unsustainable agriculture, deforestation, and other factors, fertile soil is disappearing fast. Not a single nation in the world has three percent organic content—the minimum required for agriculture. Globally, 52 percent of agricultural land is already degraded. The equivalent of one soccer pitch of soil is desertified every two seconds.

[Right] Addressing a crowd that came out in support of Save Soil in Ljubljana, Slovenia.​

And yet, for a long time, soil degradation has not received the attention it needs. Climate change, air pollution, and water scarcity get all the attention at leading environmental forums even though soil degradation is a major factor affecting each of these issues. As a result, a disaster with ramifications of untold proportions has been quietly unfolding.

In 2012, the UN Food and Agriculture Organization reported that the world had only 60 years of cultivable soil left. Other scientific studies predict that by 2045, the global food production will drop to 40 percent of its current output but the world will have 9.2 billion mouths to feed.

Spurred on by these terrifying statistics, Sadhguru saw the dire need to make soil conservation front and center of all environmental discussions. 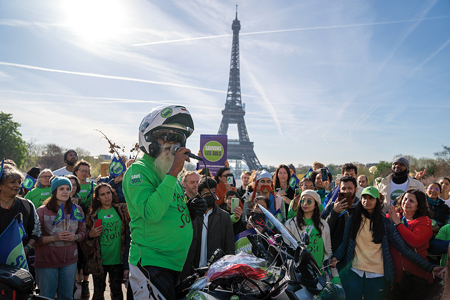 [Top] Throngs of supporters at the Eiffel Tower, Paris.​

In an attempt to draw the world’s attention to soil, Sadhguru launched the Conscious Planet–Save Soil Movement earlier this year. Realizing that the level of soil degradation is beyond individual action, he crafted Save Soil as a global movement to address the crisis. The goal is to increase the organic content in cultivable soil. 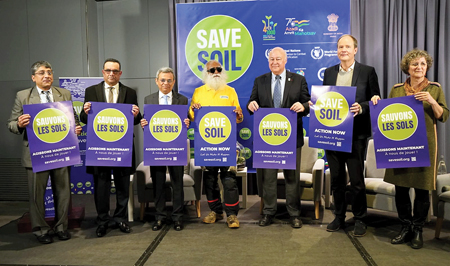 [Top] Sadhguru with scientists and Ambassador of India to France who came together to support Save Soil Movement.​

Currently, 5.26 billion people in the world live in democratic countries, with the right to vote and elect their governments. If a majority of the population in each of these nations demands policies to revitalize soil, governments cannot ignore the issue. It will lead to policy changes around the world, in turn setting the stage for a comprehensive solution to revitalize soil.

Towards this end, Sadhguru undertook an arduous 100-day journey of 30,000 kilometers as a lone motorcyclist. He rode across 27 nations to meet with government leaders, influencers, and the general public with the objective of raising awareness and recommending policy changes to ensure a minimum of three to six percent organic content in soil.

“Why take on such a daunting motorcycle journey, that too at the age of 65?” one might wonder. ​​

Sadhguru chose to do this for two reasons. Motorcycles excite the youth, and as Sadhguru says, “Unless the youth get involved in this movement, it is not going to happen.” Another reason was to drive home the urgency needed in addressing soil degradation. Sadhguru says, “During the journey, we had fixed appointments with various heads of state, agriculture and environment ministers, influencers, and well-known personalities. If I fly into different countries, the doors will not open. They have to see that I am staking my life a bit.”

After receiving a resounding response from the public, influencers, and elected representatives alike in every nation along the journey, and after 100 days that were packed with over 690 events and relentless schedules, Sadhguru’s 30,000-kilometer ride culminated on June 21, the International Day of Yoga, at the Isha Yoga Center in Coimbatore. 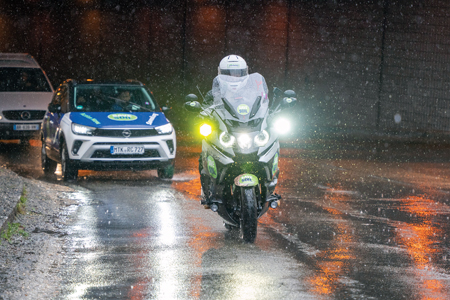 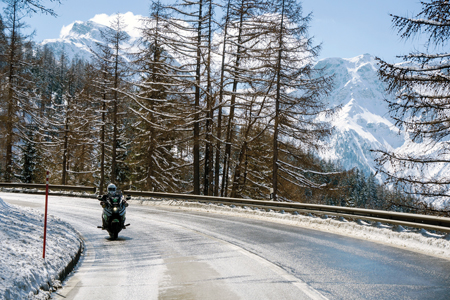 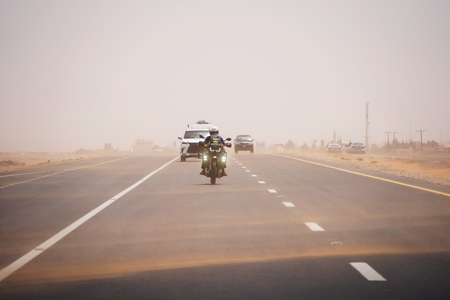 LIFE ON THE LINE

The journey, which began in London on March 21, witnessed Sadhguru stretch himself in ways that were unimaginable.

Sadhguru rode an average of 500 km every day through the rain, snow, and icy roads of northern Europe and Central Asia in late March and April, the 40-degree Celsius temperatures and the dust storms of the Middle East in May, and the lashing monsoon rains of India in June. To say that the journey was extremely risky would be an understatement. 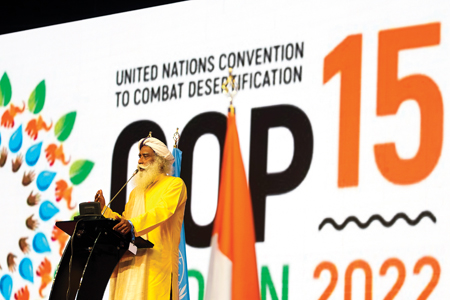 The front tire of the motorcycle had worn out by the time Sadhguru hit Austrian roads where it was pouring down, but he could not find a repair shop to get it changed along the route until he reached Sofia, Bulgaria. During several stretches of the journey, just keeping the bike balanced was difficult as winds of 45–65 kilometers per hour threatened to push him off the road.

Apart from the motorbike riding, Sadhguru’s days were filled with public events, interviews, and meetings with influencers and political leaders. To keep up with the schedule, missing meals and late nights were the norm.

Sadhguru remarked, “People’s confidence was such that in 100 days of riding 30,000 kilometers, there was not a single day planned for contingency, either for the man or the machine.” Fortunately, none was needed despite the harsh weather and challenging terrains. 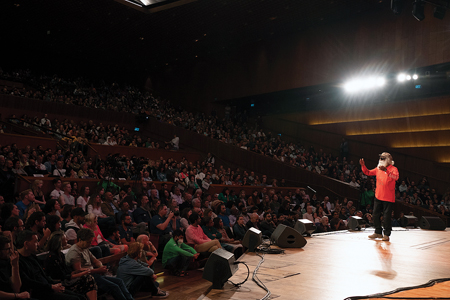 [Top] Throughout the 100-day journey, Sadhguru spoke to large crowds about the Save Soil movement. Seen here in Tel Aviv, Israel.​

THE IMPACT OF THE SAVE SOIL MOVEMENT

The world’s attention has turned to soil.

The Save Soil movement had reached over 3.9 billion people (which is over 60 percent of the world’s electorate of 5.26 billion) by the end of Sadhguru’s motorbike journey. It had also garnered the support of 74 countries, including the signing of memorandums of understanding (MOUs) with six Caribbean nations, Azerbaijan, UAE, and the French government’s “4 per 1000” initiative. In India, eight states also signed MOUs and promised their unstinted support. 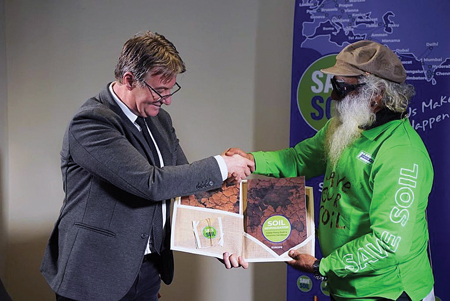 International organizations that are leading ecological action, such as the International Union of Conservation of Nations (IUCN) as well as many United Nations agencies—United Nations Convention to Combat Desertification (UNCCD), World Food Programme (WFP), Food and Agriculture Organisation (FAO), and United Nations Environment Programme’s (UNEP) Faith for Earth Initiative—have come forward to partner with the movement.

[Right] Presenting the Soil Revitalization Handbook to the Deputy Minister of Agriculture of Serbia.​

Sadhguru was also invited to address the UNCCD COP15 in Abidjan, Ivory Coast in May, marking a momentous occasion for the movement. He gave a strong call to action—to make saving soil a single-pointed agenda—to the leaders of 197 parties who were in attendance. 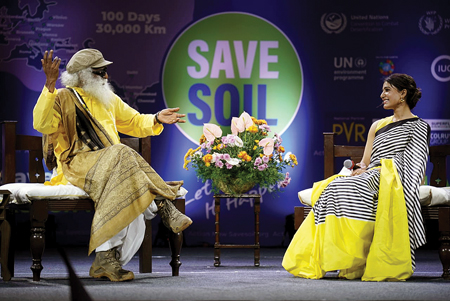 [Left] In conversation with Samantha Ruth Prabhu at the Save Soil event in Hyderabad.

Along with a Soil Policy Handbook, tailored for each of the 193 nations, he also presented an implementable three-pronged incentive-based agenda to encourage farmers in every country to improve the organic content in their land. Reminding the world that it is not scientists but farmers who manage agricultural land, he urged governments to provide the first level of incentive when a farmer reaches the minimum three percent organic content threshold. Carbon credits facilitated by businesses to such farmers were proposed as a second-level initiative. The third initiative could be market-driven, with produce from farms of higher organic content priced higher than others.

FROM RAISING AWARENESS TO IMPLEMENTATION

Though Sadhguru’s motorcycle journey has concluded, the Save Soil movement is only just beginning. Speaking at the culmination event of the motorcycle journey, Sadhguru said, “The dangerous journey is over, but the real hard work begins now.” 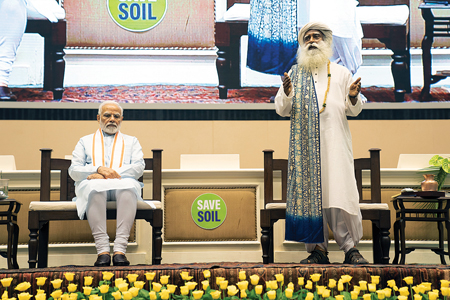 Over the next couple of months, Sadhguru is set to travel to nearly 20 countries, including the United Kingdom, the United States, the Caribbean nations, and South America, to take the movement further. With the massive support of people during the journey, Sadhguru hopes to push most nations to implement
a policy for soil regeneration within the next 12 to 18 months.

Work is also on to bring together a group of close to 30 scientists to handhold small countries in implementing policies with consideration to their specific needs in terms of geography, agricultural traditions, economics, and other factors.

The preservation and nurturing of our planet’s living soil is imperative to assure a healthy, sustainable future for this generation and the next.

“But for all this to happen, people’s voices should rise and stay raised. One day of shouting, sloganeering, and crying will not do. This needs relentless commitment,” Sadhguru says, as he signs off. 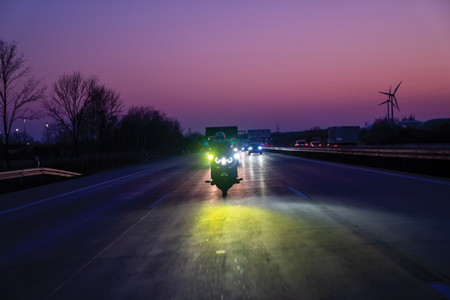 What can readers do to support the Save Soil movement?

To find out more, visit www.savesoil.org