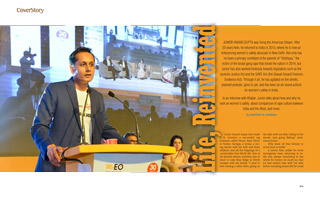 JUNIOR ANAND GUPTA was living the American Dream. After 20 years here, he returned to India in 2013, where he is now an enterprising women’s safety advocate in New Delhi. Not only has he been a primary confidant of the parents of “Nirbhaya,” the victim of the brutal gang rape that shook the nation in 2014, but Junior has also worked tirelessly towards legislation such as the Juvenile Justice Act and the SAFE Act (the Sexual Assault Forensic Evidence Act). Through it all, he has agitated on the streets, planned protests, gone to jail, and has been an all-round activist for women’s safety in India.

In an interview with Khabar, Junior talks about how and why he took on women’s safety, about comparison of rape culture between India and the West, and more.

Junior Anand Gupta had made it in America: a successful rug business called Home Style Décor in Tucker, Georgia, a house, a loving family with his wife and three children, and all the trappings of a comfortable First World life. One of his favorite leisure activities was to head to Lake Blue Ridge in North Georgia with his family. “I used to love renting a cabin there, going on the lake with my kids, hiking in the woods, and going fishing,” reminisces Junior.

Why leave all that behind to move back to India?

It seems that, unlike for most immigrants here, returning to India was always something in the works for Junior—so much so, that he had shared that with his wife before marrying. Junior felt he could continue to operate his rug business remotely from India, and since he is the only son to his parents, wanted to be there for them.

There was always a bit of idealism that characterized Junior. “My first pocket money that I got when I was thirteen or fourteen years old, I donated it to Greenpeace to save dolphins.”

Not surprisingly, while on the flight back to India, in 2013, Junior had resolved to spend at least one day a week towards some social work in India. “When I looked back at my life in the U.S., that was the one thing that was missing. And I wanted to correct that.”

The first beneficiary of Junior’s resolve to give one day a week to social work was the Aam Admi Party (AAP). It was August, 2013, and the AAP was all the rage in New Delhi for the reform-minded. “I contacted them on Facebook. Within 24 hours, I had a name, number, and a location.” And thus started Junior’s “giving back to society”—as a ground-level volunteer in an earnest political party: holding loudspeakers, walking through alleys or gullies, handing out flyers, controlling crowds, telling people where to sit. “I love photography, so I used to do a lot of photography [for AAM]. Then the first Delhi elections happened. I learnt a lot. It was an amazing experience!”

Though, it was in the national elections soon after, when the tide changed for AAM and its once promising leader, Arvind Kejriwal. Soon fissures developed in the party. In a single day 350 people, including high ranking front-runners left. Junior, too, was soon disillusioned by the dramatic about-turn of the Party and its promise.

Now Junior was a passionate activist without a cause!

But that didn’t last long. In just a couple of months, his resolve to give back with at least one day a week for a social cause soon found him the cause that resonated with him. It hit him in the face when the second anniversary of the gruesome Nirbhaya rape case came around. The country had still not healed even after two years. Beyond Nirbhaya, Junior was well aware of the pervasive toxic masculinity in certain parts of North India. He felt he could bring his skills, knowhow, and acumen as a businessman to bring systematic changes as an advocate for woman’s safety.

But in order to get to systematic changes, he needed to get his feet wet— start at the grassroots to get a sense of where to proceed from there. Initially, Junior jumped in without much strategy, but felt that his commitment would lead him in the right direction and give him the breaks he needed.

He grouped with his old AAP friends, many of whom were professionals who were also volunteering their time for society. Early on, he was told by some of them that protests don’t work: “If you protest in India, they [the police] will pick you up in the morning and drop you off in the evening and you would have achieved nothing.” Moreover, Junior said, the government, and all its apparatus, was extremely afraid of the people rising up for women’s safety: they still had flashbacks of the Nirbhaya protests, and they are super scared of that kind of volatile movement erupting again. 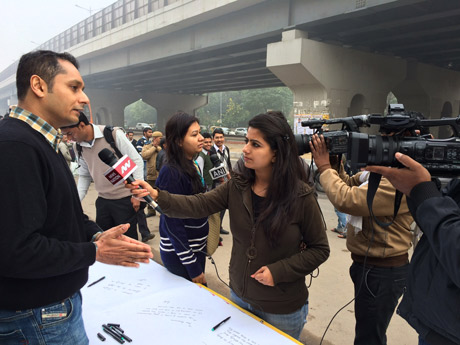 (Right) Junior's creative approaches, such as attempting a Guiness World Record for the longest letter against rape, gave him the breaks and the media coverage for further successes.

How then to raise awareness, be seen as a leader in the cause, and connect with influential people like the lawmakers? Thinking outside the box, Junior and his fellow activists came up with a brilliant idea. They would attempt a Guinness World Record for the longest collective letter against rape. Junior wrote the first two pages himself, and thanks to their foot soldiers who hit universities and the busy intersections of the city, the letter soon snowballed into close to 400 lbs of paper. Despite their best efforts, though, they could not break the record for the longest letter, chiefly because many universities were closed for the winter break.

But it didn’t matter. The campaign achieved its goal! Media coverage and publicity flowed like water. And through this, Junior met the parents of Nirbhaya. He was shocked to learn that despite the national and even international attention to their daughter’s case, the parents had been left pretty much to fend for themselves in their quest for justice. “This was such a high profile case! Even the Prime Minister had met the parents.” And yet, continued Junior, there was nobody helping them regularly. There were people who had helped them and moved on. There were people who would come on occasions, but yet the parents had no support structure.

Junior made a solemn resolve to help them. “At the time I met them, they had not heard from Supreme Court for five months as to what would be the next hearing date. … Their public prosecutor would, more often than not, not return their phone calls.” Junior was soon able to arrange for pro bono lawyers for them. The parents felt empowered. Their calls were being answered, and they were able to attend the court proceedings, which their public prosecutor had never encouraged. 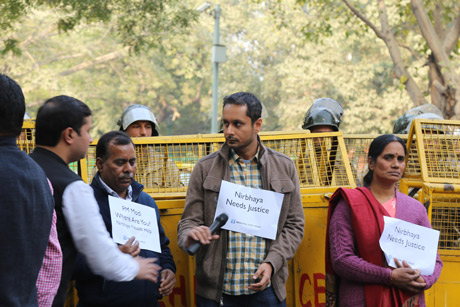 (Left) With parents of "Nirbhaya," the victim of the brutal gang rape in 2012 that shocked India.

“With Nirbhaya’s parents, my first goal was to get them out of their isolation and build a movement around them.” Junior took them to some of the most high-profile protests. The momentum built by this and other activities of his organization paid off. By 2015, “We were on every TV channel, every newspaper. We were arrested twice.” The nation was still sympathetic to Nirbhaya’s parents, but it was Junior’s efforts that relaunched them in the public eye.

During the same time, at the legislation front, the Juvenile Justice Bill, introduced by Maneka Gandhi, the Minister of Women and Child Development, which would allow 16-year-old perpetrators of rape to be tried as adults, was a major goal for the women’s movement. Junior decided it was time to put his weight behind it. After all, they had helped towards writing the Bill. He realized he could help get the bill passed if he could influence the two largest parties, Congress and BJP, to agree on it. Capitalizing on his new-found fame, he along with Nirbhaya’s parents were able to secure one-on-one meetings with the leaders of both parties.

His efforts along with the larger movement succeeded! On December 22, 2015 the Juvenile Justice Bill was passed. 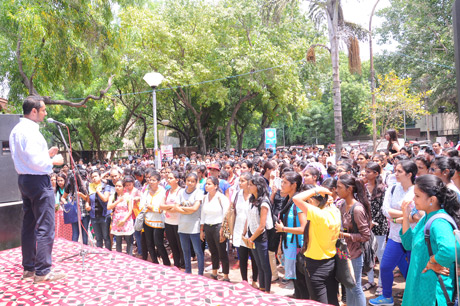 “Pursuing forensics after the Juvenile Justice Bill was passed was again more a result of staying in the field and looking for the next problem to solve. When we started looking at the delays in forensics we realized that forensic sample collection is extremely unorganized in India, and that’s how the SAFE bill (the Sexual Assault Forensic Evidence Act) came to life.”

Junior’s primary objective with SAFE is to have the rape victim bypass the visit to the police station to lodge a FIR (First Information Report). “Most police stations in India are downright scary for rape victims, considering the interrogation they routinely face in filing a FIR, at a time when they are most vulnerable and humiliated: Why were you there? What were you doing there? Are you telling the truth? Who else was there? What did you do before that?”

“In the SAFE bill we are suggesting a DNA first approach.” The Bill proposes DNA kits and a nationalized DNA data bank. The DNA kits that would come equipped with the tools for sample collection, numbers for counselors, etc., would be stocked by hospitals, and available to rape victims for free. Junior believes getting a good DNA sample from the victim and getting it tested on time and getting a DNA data bank are foundational pieces to any kind of justice system.

Most Indian women don’t know what to do if they got raped. “Just like every child needs to be taught good touch, bad touch, we should be teaching all women what to do if they get raped.” “We are saying go to a hospital, get your DNA test done, reach out to a counselor, and come back to file a case when you are informed and ready.” This eliminates one of the biggest steps that prevent many victims from pursuing justice—the dreaded police station visit even before the victim has had a chance to process a major traumatic event.

Here, too, Junior recently saw partial success when Maneka Gandhi, the Minister of Women and Child Development, in June, ordered rape evidence kits at every police station. He would have preferred it in hospitals, but each gain is a stepping stone to the next. Today, Junior’s organization, Seeking Her Empowerment, which was started in 2016, has two volunteers and an admin, and a large network of mentors and supporting organizations. Besides the systematic changes that Junior has worked towards, his organization is working closely with six victims and their families. What had started out as a “one day a week” towards a social cause has become for Anand an almost full-time engagement, even as he manages his rug business remotely from Delhi.

One man’s willingness to uproot himself from a comfortable life and dedicate himself to a cause is making quite an impact in the lives of some of the most vulnerable women victims of rape. 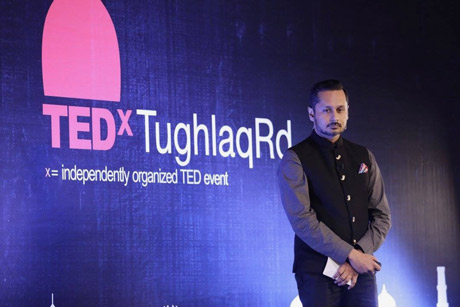 Website Bonus Feature: Video: "My One Day a Week" https://youtu.be/yv1ooLPDH2s
Anand Junior Gupta is a Business Management graduate from Babson College in USA. He also attained an Associate’s degree in Entrepreneurial Masters Program from MIT. He has tied his business to social work, selling handbags which raise money for women’s safety. He was the architect behind the Juvenile Justice Act movement.
This talk was given at a TEDx event using the TED conference format but independently organized by a local community.