Off the Beaten Path: Chamba: A city of temples and peace 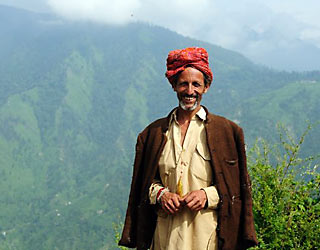 In Chamba, Himachal Pradesh, where the air is cool and wet, and mornings are miraculous with cloud-topped mountains, TOM GRANT finds that the earth itself is a temple.

High in the mountains above Chamba, Ratto wears a jacket of cloth spun from the wool of his own sheep and sewn by the hands of his own family.

Half the fun of a trip to Chamba is getting there. From Dharamsala, the hometown of the Dalai Lama, the road over Chowari Pass through the village of Jot rises 8,000 feet above sea level, and the views are stunning. The one-lane road winds through the outer Himalayas where you can see snow-covered peaks, hillsides lined with terraces of corn and rice, and the Gaddis, the tribal folks, herding goats, and the occasional Indian fox.

Arriving as we did in dusk and monsoon, our ride from Jot to Chamba was as thrilling as a roller coaster, descending in loud honks and flashing headlights before every hairpin turn and sliding around slopes that dropped into great voids of fog and valleys. 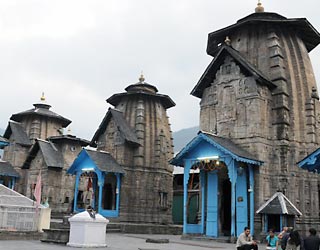 When we arrived, bursting around another narrow bend and encountering a small plateau sparkling with the lights of tightly packed homes, we realized why this community has remained untouched by the ravages of war for more than a thousand years. Peace had been preserved by the mountains. Even the powerful Mughals never invaded. Legend has it that in the 17th century, Raja Chatter Singh of Chamba was ordered to tear the temples down, but instead he crowned them with gilded pinnacles—and no one marched over the mountains to challenge him. 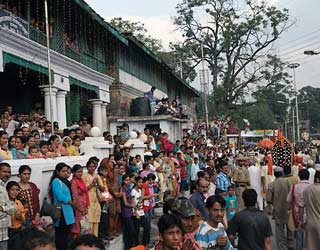 Even today, Chamba remains protected from the onslaught of foreign cultures. We saw but two Europeans in our two weeks in Chamba, which stood in stark contrast to Dharamsala or Delhi, where international  travelers were commonplace. That is not to say Chamba is a monoculture: on the contrary, this small city of 30,000 is quite diverse, with Muslim, Christian, Sikh and Hindu, Gujjar and Gaddi, side by side, marching in the same parade to honor their joint local heritage.

Morning in Chamba is miraculous. Clouds brush the tops of the mountain and flow down into the valley like slow waterfalls of mist. Chamba is the origin of the Ravi River and it cuts the valley like a knife. Above the rapids, houses balance on the edges of the hills. The air is cool and wet and filled with the sound of birds. With luck, you’ll hear the whistle of a blue thrush and the pounding of the Himalayan woodpecker; you’ll see black kites in trees along the river and buzzards circling high on ridges.

Chamba is famous for its temples, particularly the Lakshmi Narayan Temple, which dates back to the 10th century. Located in the center of the city, the six shrines in the complex are dedicated to either Shiva or Vishnu. Their forms rise like mountains from the stone walls that are covered in carved images.

Entering devotees ring the bell at the entrance. We hear one man loudly chanting as he kneels inside the blue entryway to a shrine. The sound is soothing and reassuring, echoing off the stone as proof that faith lasts far longer than any individual. At the doorway to the Vishnu shrine, a small offering wins a spoonful of blessed water for your hair. The main idol of Lord Vishnu glitters, reputedly because it was made with a rare marble imported from the Vindhyachal Mountains.

You could spend your entire day visiting temples in Chamba. A temple dedicated to the goddess Chamunda sits on Shah Madar Hill with a beautiful view of the town. There’s also the Harirai Temple near Chaugan Gate and Bensi Gopal, near the palace.

Or you could drive 19 kilometers to the nearby village of Saaho to see its temple to Shiva with a giant idol of the monkey god, Hanuman. The temple is in the center of the village, about eight blocks from the road. The walk to it gives you a taste of how people live in rural Himachal, taking you past many small stores, including sweet shops, a mill and a sewing business. If fact, you’ll see small temples everywhere, and ample evidence that the earth itself is a temple; we saw one man lighting incense and praying before a tree. 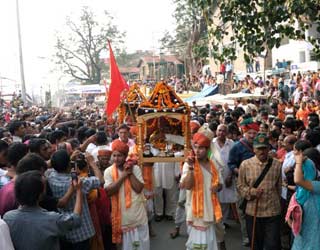 Porters carry movable shrines to Hindu gods during the Minjar Festival and devotees crowd up to take photos and make donations.

Two of the best times to visit Chamba are during its major festivals. The Sui Mata festival in the spring honors the princess Sui who gave her life to protect the people of Chamba. And in August, the Minjar festival celebrates the harvest. During Minjar, men wear silk tassels on their shirts. As we were told, sisters give their brothers the tassels to show their family love. At the end of the week, following a noisy parade, they all throw the tassels into the Ravi for good luck.

Minjar is celebrated for more than a week with music and entertainment on the great common ground at the center of the community, the Chaugan. The flea market that grows on the site is so crowded that you can barely push your way through. And while you will be tempted by tables full of all sorts of sweets and imported foods, be sure to find your way to a local organization serving regional food. Try the chamba madhra, a dish of kidney beans cooked with curd and ghee. And for dessert, be sure to taste the sweetened rice mixed with raisins and dry fruits. Your stomach will thank you. 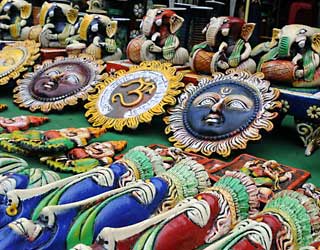 
Any time of year, the market in Chamba is a gift-hunter’s paradise. Just outside the gate of the Lakshmi Narayan temple sit two metal workers. Chamba is one of the rare places where traditional handicrafts are still practiced in small workshops maintained by the workers. Craft in brass is one of the skills known around Himachal. You can buy a small bell with a perfect chime, a brass statue of the goddess of knowledge, a large plate decorated with an image of Shiva, or any number of metal items, all priced by the kilo—with room left over for bargaining.

In the marketplace, you’ll find silver jewelry, some of which looks like it should reside in a museum. We saw thick silver bracelets molded with faces of leopards and necklaces like thick sheets of silver. We saw a jade sword handle carved like the head of a horse. And we bought two delicate silver necklaces for prices we could never find in New Delhi.

Chamba chappals, beautifully decorated sandals hand-crafted by workers in their small shops at the market, are one of the most impressive examples of local workmanship. For only 200 rupees ($5), these shoes are both chic and comfortable. Write down your friends’ sizes; chappals are a great gift.

For pure artistic beauty, the Chamba rumal is the prize of the region. Rumals are embroidered in colorful silken thread using a stitch that creates an identical image on both sides of the cloth. The images are masterful, more like needle painting than anything else. The designs often include animal and human figures. Other rumals may depict scenes from Indian myth or religion. The works are often displayed in special glass frames so that both sides can be viewed.

Depending on the artistry, a Chamba rumal may sell for a few hundred rupees, or for tens of thousands. Rumal means “kerchief” or “cover,” and from the beginning these textiles were very special covers, placed over gifts to temple gods or gift exchanges between the families of brides and grooms. Twenty years ago, the art of creating Chamba rumals was dying, but now the Delhi Council of Craft has helped create a center in Chamba to train people in this ancient art. Yet even today, only a few hundred women have the skill to produce these beautiful pieces.

You’ll find many other delightful things in the market at Chamba: colorful regional hats, hand-made socks and woolen shawls being woven as you watch. And if the snake ladies come your way, as they did to me, holding a basket of serpents in front of my face and waving a 10-rupee note to ask for a donation, consider what my Himachal friend suggested: give them 10 rupees, then take the snake and walk off. I still wonder how they would have explained to the crazy Westerner that the snake wasn’t for sale. And the beauty is, in Chamba everyone is so polite they may not ask.

When we took a day trek in the mountains above Chamba, people would stop and offer us meals. We accepted one Gujjar family’s offer of water buffalo milk served steaming hot and flat bread made of corn meal. Perhaps it was the exercise of walking three hours uphill. Perhaps it was the altitude. But it was a meal I will remember for the rest of my life, not only because it was incredibly tasty, but because it spoke to me of the spirit of the region.

Chamba is a place where peace and cooperation have reigned for more than a thousand years, and that comes through in the treatment I felt from everyone I met. This family, living in a house with no electricity, was determined to enrich the life of the strange man who walked up the hill. And they did.

Where to stay:
Himalayan Orchard Huts (www.himalayanlap.com) is a unique experience, primarily because it’s a 25-minute walk uphill from the road. But porters carry your luggage, the rooms are comfortable and your hosts serve incredible meals cooked with their own organic fruits and vegetables. And they’ll help you organize your visit for maximum enjoyment.

Other possibilities and points of interest:
Day treks in the outer Himalayas on the paths of Gaddis and Gujjars; a day trip to visit to Manimahesh Lake near Manimahesh Kailash Peak, legendary abode of Shiva; Bhuri Singh Museum to see its lovely collection of miniature paintings, as well as woodcarvings and relics from the rajas.

[Tom Grant spent 30 years as a television and newspaper journalist. He’s currently working on his Ph.D. at the Center for ETHICS* at the University of Idaho. D. K. Bhaskar is a widely published photojournalist who has traversed remote corners of the globe chronicling regions and cultures often unheard from.]