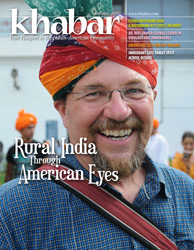 “I have never been with children so excited and proud to share their world. I wondered what my kids would do in a similar situation. If a foreigner showed up on our doorstep, would we so openly share our home, our family and our lives? Would we feel the same degree of respect for our schools and religious institutions? My answer left me humbled, realizing that most of my world is taken for granted,” says Jill Denny, a registered nurse from Milwaukee, Wisconsin.

Jill was amongst a group of over 10 participants of the International Photography Partnership (IPP) workshop that travelled from the States to rural communities of India.

Photojournalist Tom Grant, recipient of 10 national awards, who went to a similar workshop in Chamba, Himachal Pradesh, observed that on one-lane highways, cars stopped to make room for each other, and shop vendors established mutually acceptable prices and traded in harmony. “There’s a different way of thinking in India that requires getting along even when rules are not in place.”

As to the school children from America who went on the IPP workshop, JB Denny, son of Jill, talked about how he dreads long drives, and how he had fully charged his i-Pod for one such drive in India. But within seconds of beginning the road journey, JB was so immersed in the sights that he forgot about his i-Pod for the next four hours that they were on the road. The same was the case with Colin Style, another student on the workshop trip who shared his journal entry: “The ignition turns, I slap in my headphones. I planned to lie down, but glanced out the window, and I became part of the moment, part of India. The colors, the shapes, the land, the people absorbed me.”

Such insights about rural Indian life are precisely some of the results envisioned by Bhaskar D. Krishnamurthy, an award-winning photojournalist and a co-founder of IPP. In this unique initiative, Bhaskar knew he had found a mission that served all of his passions—traveling to distant corners of the world, capturing through the camera the essence of life, and thereby preserving a way of life that could vanish with modernization. His goal is to create a visual repository of remote regions of India that are largely outside the radar of the prying eyes of media.

According to Bhaskar, despite urban India’s rise to modernization, it is rural India, home to about 700 million Indians, with its rich and vibrant culture and tradition, that “has allowed the nation and its people to come so far.”

The first few workshops by the IPP involved handing out digital cameras to a couple of dozen school children for a week with a short primer on operating these machines that the children had not previously touched, along with a set of instructions on documenting the quotidian life in their village communities (“Worth a Thousand Words,” Khabar, September 2010). This year, Bhaskar added another brilliant twist to the workshops—offering the opportunity for Americans interested in travelling to a remote corner of India, interacting with locals, and together with them, creating a photographic chronicle of the place. The arrangement, figured Bhaskar, was ripe with possibilities for people from seemingly different planets to interact closely with each other with a rich promise of crosscultural education.

Jill, who was accompanied to the Orissa workshop by both her teenage children, Claire and JB, has traveled with her husband, a craniofacial surgeon, across South America on several medical missions. However, when it came to India she did have reservations. “Shamefully, I started my journey to India with preconceived notions of witnessing people living life in nothing but poverty and filth,” she said. But then her inner journey began, during the drive through India’s countryside from Delhi to Agra when she opened her mind and eyes, and was ready to “drink in India.” The workshop provided her an illuminating view of life in rural Orissa and the many strengths in the people that made up the community.

Tom Grant also shared that he began his journey with mere expectations of seeing beautiful mountain ranges and having the opportunity to meet friendly people, but returned to the U.S. with a changed perspective. “You go into something thinking you’ll meet great people but not really knowing how they will affect you. … I’ve been fortunate to have been able to see many things in my life, but I’ve never seen anything like Chamba,” he said.

Except for Tom, people in the U.S. group that went to India had minimal to no photographic skills. They learned photography under Bhaskar’s guidance in a two-week workshop that took the participants to places like Amritsar, the Wagha Border, Delhi, Agra (the Taj Mahal), and Orissa (the Konark Temple).

The workshop culminated in the Dhenkanal district of Orissa where the visitors joined about 42 local students, 12- to 15-year-olds from five schools—with the mission to capture snippets of their life on camera. They were assigned to take photographs on the following topics that constituted their daily life: school and children, livelihood, religion and rituals, environment and sustainability, markets and bazaars, home and family. “Bhaskar’s goal is to document old-world culture before modernization transforms the faces of these remote regions,” Jill said. “The best way to achieve this, he believes, is to have the very people that actually live and embrace these cultures document their own lives.”

“These young Indian children could capture incredible photos with practically no training besides point and click,” observed Lori Sra, another visitor from the U.S. The passion for the right shot spread from Bhaskar to the amateur photographers in an instant. “Some children walked over five kilometers just to click a picture of a lake since there was no water close to the village,” Deepthi said. According to Jill, “Cameras were substituted for writing instruments and photographs served as their [children’s] voice.”

Jill was surprised when the Indian children and their families, “who were not accustomed to foreign visitors,” allowed themselves to be photographed at “work, play, worship, or rest.” The vilagers shared their meals, demonstrated how they conducted their daily chores, and made the visitors “feel at home.” Despite the language barrier, she found that “so much was communicated by just being in the moment.”

Deepthi Narasimiah, one of the other participants from the U.S., said, “The general impression about rural kids is that their knowledge is limited. But this workshop demonstrated that these children have immense knowledge about their surroundings and are very creative.” She saw a bond develop between the children and cameras over the course of the workshop that extended from the child to the new world he/she was now seeing through the camera lens. She also discovered something about herself in turn: “I would have never taken those pictures that the kids have taken. My perspective about a village, its culture, and surroundings would have been very different.”

An example of this perspective is a photo of a child collecting edible roots. Upon first glance Deepthi was more concerned about figuring out whether the child in the photo was a boy or a girl. However, when she learned that the child was collecting vegetables to supplement the family’s dinner, the photo took on a whole new meaning, becoming a document evoking compassion.

Jill also witnessed the role of education and religion in society. The children had no modern luxuries or gizmos like iPods or cell phones. But despite the simple, rustic nature of their lifestyles, Jill observed, they had pride in their institutions. “The small school in the village was a place of importance, and the beloved temples scattered throughout their town were a place of honor.” She watched women preparing meals from scratch using stones to grind ingredients and primitive tools to cook food over an open fire. According to Jill, the villagers were content with their lives in Orissa. “Material wealth and objects did not consume the life in the village. God and family did. People had a spiritual connection to this earth and its beings, and I witnessed genuine kindness and respect.”

Tom’s Western emotional instincts made him feel he should “rescue” some of these kids. However, he discovered, “The last thing these kids need is a rescue. Maybe they need a dentist or a new shirt…. I had to get over my presumptions, some of which were buried very deep inside.”

However, both Tom and Jill did experience some difficult moments. “Certainly I witnessed immense poverty and some of the ‘dark realities’ of India,” Jill said. “India is a place that forces you to look beyond, both literally and figuratively.” “The unimaginable beauty in this country and its people” helped her overcome some of the unpleasant experiences of the journey.

For Tom, the night drive from Dharamsala to Chamba (no flights operate that route) was an unforgettable 16 hours. The driver did not have perfect night vision, and the only way to tell the roadway from the cliff was a line of white rocks along the side of the road, he recalls with a shudder.

“They (rural Indians) live a hard life by Western standards, but their generosity, openness and warmth touched me,” says Tom. “By offering me a cup of chai, they were inviting me into their lives.” “India,” according to Tom, “is democracy in action. Oftentimes in the West we expect people in other countries to change lifestyles to become like us. I don’t feel like that any longer.” He described his experiences in Chamba as “enlightening,” and applauds Bhaskar for single-handedly making projects of this scale so successful.

How does one measure the success of such ventures? By counting the 5000 villagers who gave the IPP a closing ceremony, or the village communities who decorated their homes with their children’s photos? Or by the growing number of international schools requesting that their children be considered for future IPP workshops? Or by the enthusiasm of the American teenagers who raised money by selling pizza and Coke to buy batteries needed to power the cameras? What is the true testimony to the success of the workshops—the crosscultural exchange everyone benefited from or the heightened self-esteem visible in each village child after the project?

“I don’t know,” Bhaskar admitted modestly. What Bhaskar does know is that the differences between both worlds are potential causes for disconnect. According to him, India has a strong social connectivity between its people but suffers a sad lack of resources. The West, on the other hand, has an abundance of resources but feels the absence of the social connectivity.

According to Tom, “We (in the West) use rules as an excuse to be entirely selfish.” The experiences in Orissa also gave Jill a new understanding, “India is a rainbow in a world of black and white,” she said, “and the Indian people are the pot of gold you discover at the rainbow’s end.”