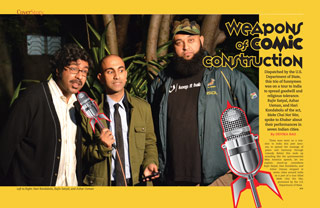 
Dispatched by the U.S. Department of State, this trio of funnymen was on a tour to India to spread goodwill and religious tolerance. Rajiv Satyal, Azhar Usman, and Hari Kondabolu of the act, Make Chai Not War, spoke to Khabar about their performances in seven Indian cities.


Three men went on a mission to India this past January, to spread the message of peace and harmony through comedy. Before this ends up sounding like the quintessential Miss America speech, let me explain: stand-up comedians Rajiv Satyal, Hari Kondabolu, and Azhar Usman stopped at seven cities around India as a part of a tour titled Make Chai Not War, promoted by the U.S. Department of State.

Conceived in 2007, Make Chai Not War was the brainchild of Satyal and Usman, who are Hindu and Muslim, respectively. The two friends beat the Department of State to this idea of promoting harmony through comedy.

In an interview with the Wall Street Journal, Satyal said, “Make Chai Not War is a call-back to the hippie motto of ‘Make Love, Not War’. Chai is a tea that both Hindus and Muslims drink. So if we can enjoy the same thing, be it a hot drink or a laugh, surely we can bridge any other issues we may have. That is the theme of the show—bringing Hindus and Muslims (and inherently all other religions) together through humor.”

The two religions, known for their historical tensions, were represented by two men as different as night and day—one skinny, clean-shaven guy from Ohio, described by himself as very Americanized, and the other man, from Chicago, who sports a hearty beard and could easily pass as an NFL linebacker. On stage, Satyal tells his life story, while Usman goes for racism, declaring with acute self-awareness, “I’m fully aware that most of you have never seen someone like me smile.”

The comedians toured intermittently under the Make Chai Not War banner throughout the U.S., as their personal schedules would allow. When performing in London, Usman caught the eye of Michael Macy, the cultural attaché of the U.S. Embassy in England. Macy, who later was posted to New Delhi, brought Usman on a solo tour. After its success, the goal of bringing the show to India became a reality. Added to the tour was Hari Kondabolu, a comedian from Queens, N.Y., who discusses colonialism.

In a press conference, Department of State spokesperson Victoria Nuland explained this effort as a regular global exchange to talk about religious tolerance, prejudices and the positive experiences of growing up in America.

Khabar spoke to Rajiv Satyal, Azhar Usman, and Hari Kondabolu upon the comedians’ return stateside about their experiences in this tour and how the message translated on the stage.

When you created the show you had the bold goal of promoting harmony and peace. What really prompted you to do this and why hadn’t it been done before?


Rajiv Satyal: One of the reasons it was not done before is because not many South Asian American comedians existed. So there was not much opportunity. One thing that is really important is that we are not preachy or religious on stage. We just get on stage to do our acts. It is more about the subliminal message of two people, one Muslim and one Hindu, coming together for a common purpose.

When Michael Macy approached you about bringing this to India, what was your initial reaction?


RS: We jumped at this chance right away because Azhar had a good relationship with the State Department. Through the Facebook page of Make Chai Not War, we saw that there was a lot of interest in it in India. Many people were asking, “When is this coming to India?” And this opportunity was a great way to continue the message that Azhar and I initially started with in 2007.

Did you have to make changes to your act for your audiences in India? Did you find it difficult to connect to them, considering differences in regional nuances?

RS: Our acts inserted really well into India, and they were received really well from the audiences. We live in such a monoglobal culture now. Thanks to YouTube, Twitter, Facebook, Skype and all these other social media platforms, the reach of American culture really forms a global celebrity. We are all seeing the same movies, reading the same books, or listening to the same music. Lady Gaga and Justin Bieber are as big in India as they are here. So the audience gets these references because we are all connected through pop culture, making it a great launching pad to engage the audience. 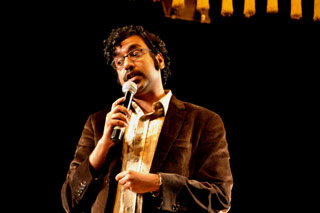 Hari Kondabolu: Except that one in Patna. I don’t have a grasp on the Indian language as Rajiv or Azhar, and I had no idea that the audience didn’t understand English. My act did not do well because of the language barrier, but you know, that moment was outstanding. We look the same, I have an Indian name, yet the audience and I could not understand each other. Where else are you going to have such a moment? 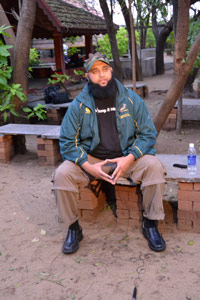 Azhar Usman: I had a fairly good idea of what would play in India, so to say. My act has become increasingly global/cosmopolitan in its outlook and at its core over the past couple of years anyway, so it was actually a wonderful time for me to perform in India. How about your individual acts? Any editing or rewrites for the Indian audience?


RS: Absolutely, but it was just in the frame of a routine stand-up comedy show. When you are performing in Chennai, which is smaller and a bit more conservative than Mumbai, you have to change it up slightly. The same method would apply if I was performing in Cincinnati (Satyal’s hometown) or Los Angeles.

Since this was a State Department-sponsored tour, did you have edicts to go by regarding what can or cannot be included in your act?


RS: That was actually really cool about this tour. The people in charge did not tell us anything of that sort— no direction on what we could and could not say. The only overcast direction we received was, “Do not come in as Americans telling us how to live,” which is understandable and rightly so. Even with this underlying theme, it was a comedy tour and the three of us were doing what we are good at. In turn, that also helped showcase democracy as it promoted free speech and healthy discord.

The shows sponsored by the State Department in all seven cities were sold out. Then, the three of you put on an encore performance in New Delhi. What made you decide to perform an eighth show?


RS: We were so pleasantly surprised at the reception we received at these shows. But, what was funny is that New Delhi was not on the list of the tour, so we got, “Why aren’t you coming to New Delhi?” constantly from the media and the audience. We got so much of this that the three of us decided to do a show in New Delhi at the last minute. It was the only show that we charged for because the New Delhi show was not sponsored by the State Department.

You would think New Delhi, being the capital, would be on the list. Did they say why it was not?


RS: Trust me, it was one of the 26 questions I had for the organizer of this tour. I am not even joking. But I feel a reason may be because New Delhi is saturated with cultural programming, since the Embassy is there.

Calcutta’s Telegraph newspaper described the show as unity in diversity. What do you think it meant by that?


RS: That is such a great compliment. We are comedians and all we want to do is make people laugh. People go to a comedy show to laugh—there is no other primary reason someone buys tickets to go to a comedy show. But, if you can also make them think or have an afterthought that starts a dialogue or conversation, then that is really a great outreach of the underlying message.

Tell us some of the big punch lines on this tour. What was received overwhelmingly well throughout the different cities?

Since I hosted many of these shows on tour, it was really important to ease them into it so they are in a good mindset when the heavier topics are spoken about. The audience has to know that you are good-natured, and not mean-spirited. That is truly important.

What did this tour mean to you personally? What did you take away from it?


RS: I believe in what they were trying to promote; the message is really important. Being endorsed by your own government is amazing. At the same time, India is our parents’ homeland and they have such a sense of pride seeing us in their hometown. It is also great to take your act global because it is then you realize that humor is universal. But, in addition to all of this, I got to bond and create deeper friendships with Azhar and Hari over this shared experience for all three of us.

What do you think the audiences took away from the three of you during the Make Chai Not War tour?
RS: We are such a spectacle. I think it was fascinating for them to see us really. We are them, but we are not. I have a very Americanized look. Hari grew out his hair, mustache, and dresses like an uncle. He actually says his clothes are from his Chinna in Andhra. Azhar is a big guy and extremely hard to place. That in itself is quite fascinating to witness. I really hope that a Hindu and Muslim standing on stage and co-existing send the message that we should treat each other well. We need to remember this message and live this message.


HK: During press conferences throughout the tour, the reporters would always pose questions to Rajiv or Azhar. They would simply overlook me. So, this kept going on and finally, at one of the last conferences, I said something. And the reporter finally said, “Well, you look Indian.” It completely floored me.

What do you see in store for stand-up comedy in India?
AU: Stand-up will have a very strong future in India. The world-famous London Comedy Store has opened up a Mumbai branch now; Viacom has launched Comedy Central India (through its joint venture with the Indian media conglomerate Network18); and Indian audiences are developing a real taste for the art form. I think that stand-up is one of the most raw and honest of the performing arts and Indians love to feel intimacy by shedding “takalluf” (unnecessary pretense/formality). Hence, conceptually, it makes sense that Indian culture would embrace the art of stand-up.


RS: This is exciting because we were pioneering this effort in India. Stand-up comedy, along with jazz, is said to be a true American art form. We are getting to see audiences open up to stand-up and really relate to comedians and the stories we tell.

From a distance, the three look like an odd group. But under the scope of the message of tolerance and acceptance, there cannot be a better example of coming together for a common purpose than these three South Asian Americans.

Remember this article in Khabar from from June 2008?