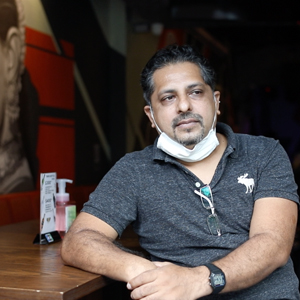 Zafar Anjum is a publisher, journalist, writer and filmmaker based in Singapore. He’s the founder of Kitaab, an ambitious publishing venture that began modestly fifteen years ago as a meeting place for Asian writers. Lauded as a curator and promoter of Asian writing in English, Kitaab is growing rapidly and its signature yearly anthologies—focusing on short stories, travel, crime fiction and, most recently, poetry—are gaining wider attention.

You wear many hats. What fuels your creative ventures?

I am grateful to wear all these hats. I’ve been a journalist for more than two decades; now I write primarily in the tech space. As a writer, editor and publisher, I am always working on books and steering publishing projects. Filmmaking is a relatively new passion for me, though I had dreamed about making films since my childhood. Writing is the common thread running across all these activities. I am not interested solely in entertainment. Perhaps my basic motivation is seeking the human connection. I want to speak out against oppression, and bad behavior against humanity. Despite my personal failing or knowing that one is flawed, I seek justice and a sense of order in the world that we live in, and I seek beauty in different forms of expressions—be it literary or audio-visual.

What led to the inception of Kitaab in Singapore? Do you see Singapore as a confluence of Asian cultures?

I came to Singapore in 2004 when the internet was still in its early phase. Google was still new, blogging was just picking up, and there was hardly any social media. I felt very lonely and disconnected. I also wanted to create a space for fellow writers from Asia. So I started Kitaab.org as a website to write about Asian books and writers. As far as I knew, there was no such platform in Asia in those days. Soon, many like-minded people joined Kitaab on a voluntary basis and it became a community-led platform. In this part of the world, we then had only two prominent literary festivals: the Singapore Writers Festival and the Hong Kong Literary Festival. I really appreciated Singapore’s multiculturalism. We had writers from different parts of the world. We used to meet up, read and critique each other’s work, and learn from each other. Over the years, that culture has grown, and you can find writers of many nationalities here from Asia and beyond, actively pursuing their literary dreams.

As an Indian, why did you choose to shine the light on a broader Asian literary culture rather than strictly South Asian? How do the cultures compare and contrast?

Coming from India, I had seen and experienced a very robust South Asian literary culture. My main exposure was to Urdu, Hindi and English literature in India. When I started living in Singapore, I was curious to find out about other Asian literary cultures. I thought that it was necessary to build that bridge, that connection among cultures. Kitaab was a small effort in that direction. 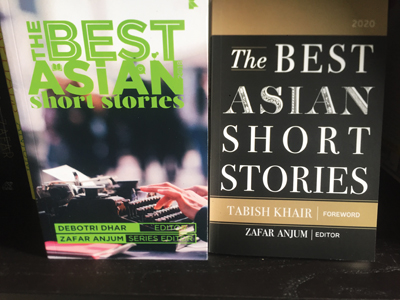 Asian culture has certain traits that are reflected through its myriad literary traditions. If Western literature is about identity, individualism and race, Asian literature reflects a lot on family values and the pressure of forces of modernity that challenge those values. Asia’s colonial history, the wars and conquests, and how all these have shaped our societies also figure prominently in our literature. We see this reflected in many of the stories that we publish in The Best Asian series.

Asian writing in English, in general, is a rapidly growing phenomenon. More and more Asians are writing and publishing in English. The reading and writing culture here is not on par with the West, but it is growing nevertheless. I was inspired by The Best American series, which selects stories already published in magazines and journals in the U.S. in any particular year. The only difference is that we have to do everything from scratch: selecting the pieces, editing them, and then publishing them. But we do this because Asian voices need to be heard across the world. After all, nearly half the world’s population lives in Asia.

Since its inception, The Best Asian Short Stories has curated stories from around the world—from the hills of Uttarakhand to the Australian Outback. You look for “literary levity.” Tell us more about your selection process.

The selection process starts with a call for submissions. Once we have finalized an editor, he or she drafts the call for submissions and together we discuss the potential themes. The editor then takes over and selects the best of the submissions, which are then edited and published in a volume. We are now in the fifth year of The Best Asian series, and we have followed this process without fail. But honestly speaking, the selection process is bound to be subjective as different editors have different approaches. While I as an editor look for literary levity, and readability is very important for me, others might prize experimentation in form over other features in the selection of a piece. So it depends on what each editor brings to the table.

The Best Asian Short Stories is the first anthology of its ilk. Tell us about the recognition and feedback your initiative has received locally and beyond?

The anthology has won appreciation from all over the world. We have been reviewed, featured or recommended by reputed magazines and journals, ranging from the subcontinent to Southeast Asia, Japan and the United States. The series has been on the reading list of many universities and colleges in Asia and the U.S. But we believe that these are still early years for us and there is a long way to go.

Big publishing houses seek maximum return on investment. Kitaab goes beyond monetization to proffer readers and writers return on engagement. Did Kitaab introduce a paywall to ensure its viability?

Kitaab has been a community-driven initiative right from the beginning. It wasn’t started as a business. It germinated as a passion project. We have sustained it over the last fifteen years, but as the operations have grown, the costs have grown, and we are now seeking support from the community through subscriptions. Though, comparatively speaking, we are very small-scale. Many publications are treading on the same path—The Guardian (they have a large endowment fund) and The London Review of Books come to my mind as examples. Most literary ventures fold up because they run out of funds or backers. My goal is to make Kitaab self-sustainable so that it survives to serve the literary community for years to come.