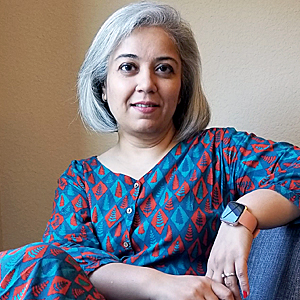 Jenny Bhatt, an engineer by training and a writer by choice, is the dynamic host of the Desi Books podcast. In less than a year of its launch, it has logged over 1,000 minutes of airtime and drawn subscribers from 31 countries. The biweekly podcast invites authors to read from their work and facilitates a discussion on the art and craft of writing. Bhatt, whose debut story collection is titled Each of Us Killers, is a translator and reviewer as well.

You have lived and worked across three continents. Where did it all begin? A brief autobiography of Jenny Bhatt, if you will!

I was born and raised in India. At age 19, I moved to the U.K. to study engineering, and after that I worked across the U.K., Europe, and the U.S. In 2012, I left my corporate life and moved lock, stock, and barrel to India for nearly six years. During that time, I hunkered down as a full-time writer, focusing on my writing and translation work. I wrote my first story collection, Each of Us Killers (7.13 Books), and worked on my first translation, Ratno Dholi: The Best Stories of Dhumketu (HarperCollins India).

What drew you away from engineering and into the arena of writing?

I’d always been drawn to storytelling. At the age of 10, my English teacher at a boarding school in Panchgani, India, encouraged me to enter a national story writing competition. I won Rs 75, which was a huge sum. But, more than that, it was a terrific validation for me that, maybe, I had some kind of knack. I decided I was going to be a writer. But my parents wanted me to pursue sensible goals in life. They urged me into engineering (though they’d have preferred medical, of course) but I continued writing, if only for myself. My 40th year was the turning point. I wrote a Longreads essay about emerging as a writer after 40.

What was the inspiration for hosting a podcast?   (desibooks.co)

In 2019, I’d posted a tweet asking if there might be interest in a podcast focused on Indian writers. That got a lot of play, and many writers and readers asked to encompass South Asia instead of just India. I liked that because I feel that there’s so much shared history and culture across that entire region. Our literary traditions across regional languages are diverse and have similarities. In 2020, once the pandemic began, I saw how book review/interview spaces began to shrink. South Asian writers were already not getting much media attention, beyond the one or two big publisher authors who get all the oxygen, and things got even more dire. Having two books out in a pandemic year myself, I knew how bad it was getting. I wanted to do something positive rather than complain about it, and that’s how Desi Books began in April 2020.

What are the biggest challenges of hosting a podcast in a competitive arena? How do you make Desi Books stand out in a noisy world?

I wanted it to be a little different from the usual. And, since I couldn’t pay anyone else to do the work, I had to get creative with different segments to engage authors. So, besides the traditional interview (where I focus on craft with #DesiCraftChat), there are other segments, which showcase authors differently.

The biggest challenge with any podcast is getting listeners to tune in regularly. Especially when there’s so much else vying for their attention with 24/7 news and social media. What I find works best: (1) authors willing to engage and co-promote their episodes; (2) ensuring an active and professional social media presence; (3) engaging with listeners by taking their feedback/inputs on board; and (4) collaborating with other like-minded initiatives like Libro.FM, Global Literature in Libraries Initiative, etc.

How do you select writers to be featured on Desi Books?

In the beginning, it was mostly me reaching out to writers of South Asian origin with books I was personally interested in. Gradually, writers and their publicists began reaching out to me. So this has become a terrific two-way street now. It takes time to build relationships and ensure a good fit. I still select writers based on whether I can speak intelligently about their book with them and the listeners. I’m partial to small press authors, creative nonfiction, and literary fiction myself. I’ve also got projects in the works to bring on a few other folks who can add value to genres like children’s literature. 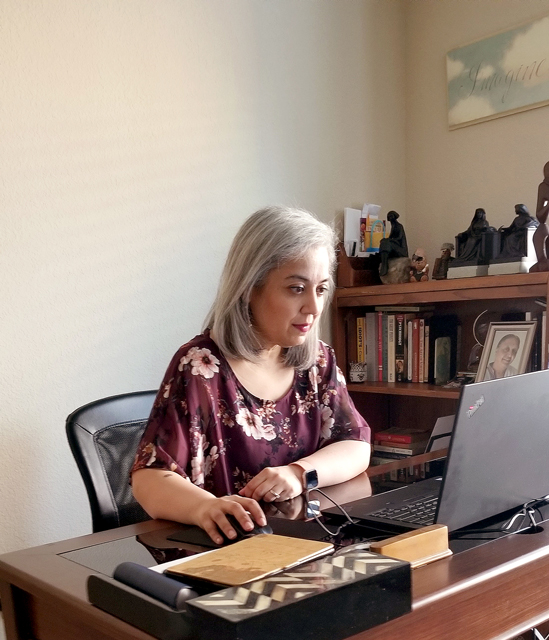 What generated your interest in book translations?

My mother, who passed away in 2014, was a big reader of Gujarati literature. She taught me to read and write Gujarati at home. When I quit my corporate job and began focusing on writing, she kept asking me to work with her on translating her favorite Gujarati writers. I kept putting her off, saying I wanted to focus on my own writing first. So, sadly, we never got to collaborate due to her sudden passing. Then, I inherited her small personal library; she had almost all of Dhumketu’s fiction. His short stories, in particular, struck me as timeless even though some were nearly a hundred years old. He’s considered a short story pioneer in the Gujarati language and, though he wrote of a different time and place, his themes and preoccupations were similar to mine: caste, class, gender, age, etc. Initially, I started translating some of his stories as a tribute to my mother and to share with my family. When I mentioned this in passing to a literary agent in India, he jumped on it and said we need to do this as a book.

Tell us about your collaborations with organizations like the Global Literature and Libraries Initiative.

Karen Van Drie, the executive director, and I connected over Twitter because I shared some of their posts. She asked to guest-edit a month in December. I thought of spotlighting translators instead through a Q&A. She loved the idea, and it took off from there. December brought the highest ever readership for GLLI, more than double of the last readership high. It was one of the brightest spots of 2020 for me. What a lovely way to end the year!

Oh, yes, these are mutually beneficial disciplines. I wrote a bit about it in Poets & Writers last year. Translating requires a kind of close reading of another writer’s work that makes me a better reader, writer, and editor of my own work. And, practicing the craft of fiction myself, I’m more alert to another writer’s craft and techniques as well.

Writing your own fiction and translating another writer’s fiction are both creative processes. There’s a lot about translating that readers and some reviewers don’t quite see. They look for whether something’s an “easy, smooth read” or whether the language is perfect. But there are so many socio-cultural nuances that have to be understood and conveyed. My first translation was supposed to be 50K words. It ended up being more than 80K words. It’s not perfect because I’m not a formally trained translator. I’ve learned a lot through the harrowing process, from getting copyright permission to translate to the marketing and promotion cycle. There’s an essay coming soon, which I hope might help other rookie translators. This is not a field that compensates anywhere near adequately for the amount of effort entailed.

How has Desi Books been reviewed? Any constructive criticism? Tell us about your future plans for Desi Books.

When the podcast first began, episodes aired weekly. The first bit of feedback was that it was a bit much as listeners wanted time to catch up. So I switched to biweekly. Beyond that, people have asked for more interviews, so I’ve been doing that. Listeners enjoy the #FiveDesiFaves segment a lot, where I ask a writer to share their five favorite books by writers of South Asian origin, especially as they might relate to their own latest book. The #DesiBookGiveaway was popular while it ran, but it takes a lot of coordination effort, so I’ve put it on hold for now.

I keep being asked about a book club, so I really want to do that. We’ll focus on books in translation and bring on the translator for a discussion at the end, where feasible. There have been requests for book reviews, and I’m planning something around that. Also, for future plans, more collaborations. Stay tuned, as they say.

In your experience, are Indian publishers exercising more self-censorship because of the current political climate? Are they perhaps more reluctant to publish books with themes and stories that may displease the government?

I don’t know of a time when publishing books in India wasn’t subject to some form of censorship or other. It’s always been there. Just that there’s more vocal outcry now due to social media. That said, social media has also amplified good causes that have made Indian publishers withdraw certain books, I believe. So that’s a good thing too. In the end, I think people in India know that books are not the only way to get political messages out. In fact, messenger apps, Youtube, Facebook, Twitter, etc., have been way more effective. I’m more concerned that Indian publishers aren’t seeing how they’re making books less relevant with all the other problems that are rife across the industry there because of the few who hold all the power and authority.