Savior of the Insolvent 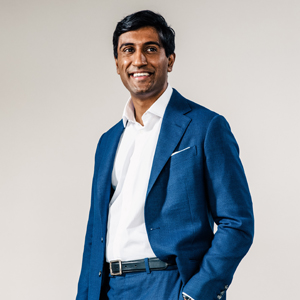 Meet Rohan Pavuluri, one of the innovators picked for TIME100 Next 2021. He is the cofounder of Upsolve, a nonprofit that helps struggling low-income families. Its free online tool makes bankruptcy filing easier, avoiding the use of expensive legal services. As people across the country grapple with pandemic-induced financial trauma and debt, Upsolve paves their way for a fresh start. So far, Upsolve has helped users mitigate more than $300 million in debt.

Let's begin by addressing the stigma attached to individual bankruptcy.

Bankruptcy is a serious financial and legal decision. It shouldn't be taken lightly. When we see corporations filing for bankruptcy, we view it as a market event, some sort of way for corporations to protect themselves.

But when individuals file for bankruptcy, for some reason, we view it as a moral failing, and that's wrong.
What was your major in college? What drew your attention to bankruptcy when you were at Harvard Law School?

I majored in statistics. I learned about bankruptcy while I was a research assistant at the Harvard Law School Access to Justice Lab. Bankruptcy is this amazing tool to help rescue low-income and working-class families after financial shocks. But there's a cruel irony that it costs $1,500 in legal fees. They are modern-day poll taxes! When you can't afford to pay the fee, you can't access your rights.

You’ve described Upsolve as “think TurboTax for bankruptcy.” How did the idea for Upsolve take root?

In your profile in Time magazine, you said, “We've found a way to use technology to address a civil rights injustice at scale.” Please elucidate the social injustice as seen through the lens of finance in the U.S.

The poor and low-income families live in a different America than everyone else. They don't have access to the same laws and rights as people who are wealthier and can afford legal fees. That is to say that if you cannot afford the legal fees to a lawyer, you are out of luck. Legal fees in areas of poverty law are one of the greatest civil rights injustices of our time. That's a fundamental injustice of the American democracy, and Americans need to know about it.

While bankruptcy erases debt, it impacts one's credit score. How long after a “fresh start” can one accrue a robust credit rating?

A lot of people who have filed for bankruptcy already have low credit scores, to begin with. Most people that use Upsolve have less than a 600 credit score. Oftentimes we see their credit score improves. Even in the near and medium-term, people with high credit scores, when they file, oftentimes their credit goes down. One thing to keep in mind is that when you are able to wipe your slate clean, and you already have poor credit, to begin with, you can oftentimes be better off than the counterfactual where you remain in debt, remain insolvent, and your wages are being garnished.

In 2005, the federal law was changed to make it harder for middle-class families to discharge debts in bankruptcy. What is your view of the 2020 reform bill, specifically chapter 10, as introduced by Senator Elizabeth Warren? Should the stance on non-dischargeable debt like student loans be altered?

I think it's a great idea to simplify the bankruptcy code. And yes, I think student loans should be treated like any other debt. One in three Upsolve users does not get a true fresh start due to student loans.

By some estimates, U.S. laws provide debtors exceptional protections. In your opinion, how does the US bankruptcy code compare to other developed nations?

Our bankruptcy laws are a core part of the American DNA: when you go through tough times, we give you a second chance. That's what's special about America.

The pandemic has pushed countless people into financially challenging situations. Has Upsolve seen a significant rise in users in the recent months?

Currently, bankruptcy filings have been down. Stimulus checks and unemployment benefits are holding people over temporarily. The same thing goes with the debt collection moratoriums. But experts are predicting, ourselves included, that in the coming months, whether it's the end of this year or early next year, there's going to be a massive demand for bankruptcy—people who need to get back on their feet and re-enter the economy. The biggest three reasons people file for bankruptcy in America are job loss, medical bills, and family breakups—things that are totally out of your control. When you're living paycheck to paycheck, one financial shock can throw you into tens of thousands of dollars in debt. We hope that people will be able to get back on their feet using this tool when appropriate.

It's super humbling. I look up to dozens of folks on that list. I'm lucky to have the recognition because it raises awareness around the injustice we want to address and our unique approach. It's a great platform.