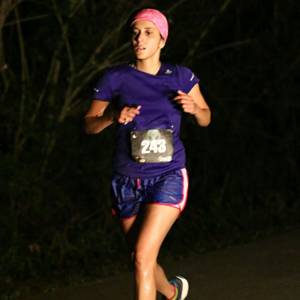 In one year, 38-year-old Deepika Chalke completed an astonishing 105 half-marathons. But she did it out of passion, not to win a spot in the Guinness World Records. The Atlanta-based runner, who is as tenacious as she’s tough, shares her stories of struggle and grit—and offers a roadmap for success.

You are a software engineer by training and currently work as a senior analyst for a corporation. What prompted your move from India to the U.S.?

I grew up in India and came to the U.S.A.—Texas A&M—for my master’s more than a decade ago.

You played sports during your formative years, but you never invested in an athletic career. What spurred your interest in running? Was fitness the primary motivation or was there also a desire to connect with nature and something bigger than yourself?

I loved playing sports as a child but I never had the opportunity to play sports beyond the age of 10. At 17, I fell in love with marathons on the outskirts of the Mahalakshmi Temple when I saw a bunch of Mumbai marathoners run past me. I thought the marathoners were doing something heroic and tough. I hoped someday I would run marathons.

More recently, in 2018, I read a brilliant book called Spark: The Revolutionary New Science of Exercise and the Brain by John J. Ratey. Inspired, I started to exercise almost daily, which eventually led to 105 halfmarathons in 365 days! In running, I find strength, hope, meaning, exhilaration, flow, challenge, and joy. It helps relieve nervous energy, and a runner’s high is one of the best human experiences ever. I run because it calls out to me and awakens my inner fighter. I enjoy running in nature the most because it’s very liberating, therapeutic and good for the soul.

You are also an author. You view the world through an empyreal lens. Your book, The Stars and the Void (Notion Press, 2019), is “a call for all dreamers, believers, seekers, warriors, healers, wanderers, and stargazers….” How did the idea for the book take root? Do you observe and document your thoughts as they arise on your runs?

I started writing when I was a child. I wrote a lot every weekend from 2016 to 2018 without any intention of publishing a book. I wrote because it made me happy and filled my life with hope, meaning, and beauty. It was a way for my core to express itself, make sense of chaos, and connect with something deep in the cosmos. I hoped my writing would help someone in some way, so I took the leap and answered the call to publish because I felt compelled to share. Sometimes I have insights, answers, and ideas on my runs that help me make sense of the bizarre world and the strange cosmos that we inhabit.

I do not regret my decision. For me, running was the most important thing. Every run was a call to adventure, to discover hope, healing, strength, and joy. What could be greater than a wondrous adventure that fulfills your core?

When I realized I had two choices—(1) spend a year, investing money, time, and energy to pull off the complicated logistics involved in a Guinness world record and then restart my running a year or more later or (2) forget about the official record but still continue with my record attempt—I chose to run and forget about the record. Because intuitively that felt right. I had run 1550 miles in 2020, 71 half-marathons and six marathons in 2021, and 49 half-marathons and three marathons from January through May in 2022. I was starting to get tired … I did not know if life would give me another chance later. But I would love to approach the Guinness Book of Records in the future and replicate this feat.

Tell us about your training process and diet during the record setting year when you completed 105 half-marathons (the current Guinness record stands at 102 by a woman).

From February 2018 to March 2020, I spent at least 30 minutes in the gym almost every day on the elliptical. Once the pandemic hit, I started running on my favorite trail in Smryna, where I ran at least 45 minutes each day. I spent the next six months building my endurance. I ended 2020 with 1550 miles. A 30-day challenge is a great idea because it builds resilience and toughness and by the end running starts to become a habit. It also improves your diet organically because the body naturally craves fruits and vegetables to repair joints and muscles. I ran 71 half-marathons and six marathons in 2021 and 49 half-marathons and three marathons from January to May in 2022. I ran all my half-marathons nonstop without any walking breaks. From June 2021 to May 2022, I ran my record-breaking 105 half-marathons and five official marathons. I did not have a running coach, and I don't come from a family of athletes, but I always took feedback from my body on how much to eat and how much to run.

Being a vegetarian, I had fruit smoothies, veggies, and black coffee. I followed intermittent fasting because it made me a stronger and faster runner. My go-to smoothie was: banana, blueberry, blackberry, raspberry, protein powder, chia seeds, flax seeds, hemp seeds, Nescafé coffee powder, and dates with water. I had it within two hours of my run.

According to an article in The New York Times (“How to Run Like A Girl”), “Women tend to get more injuries than men, in part due to differences in the shape of a woman’s hips and pelvis that put more stress on our bodies. Compared to men, women tend to have less strength in their hips and core.” Tell us about the injuries you may have suffered on account of running and what you do to prevent that and persevere.

That's interesting … I did not know this! Thanks for sharing. After my first half-marathon, which I finished in 2:08:36 drenched in rain and chilled to the core in 45-degree cold, I was struck with IT band injury, which prevented me from running and took a year to heal. I learned a painful lesson: train smart, invest in good running shoes, and avoid injuries at all costs. I had run my first half-marathon in old, worn-out shoes, and I had trained only on the treadmill, never having run on the road. I realized the importance of training and right gear.

After running the Fort Lauderdale and Publix Atlanta marathons on back-to-back weekends, I was limping, my knees and legs hurt terribly and I had limited mobility for two weeks. I had to discontinue running for almost three weeks during my record attempt. I actually feared my record attempt was over, but the body repaired itself and I could continue running. Lesson learned. When you have pushed the body beyond its breaking point, take a break for as long as your body needs to recover, repair, and heal. Don't push it anymore and don't try to rush the recovery and healing journey. Listen to your body first and then to outside wisdom.

How often do you run these days? Do you have a favorite trail in the city?

I now run once a week. After running 3,914 miles in 2.5 years, I had to take a break, after falling ill. It’s hard to slow down but I know life is about seasons, so I have surrendered to the recovery season without any anxiety. Silver Comet is my favorite trail; it's been my home away from home. I am eternally grateful to this trail for allowing me to train and accomplish my record and for some of the most memorable adventures of my life. I was drawn to this trail because I love astronomy and the word comet resonated with me.