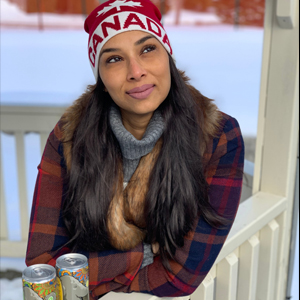 Maxine Henderson trained as an electrical engineer, but her true passion is engineering Bollywood-inspired drinks. Her distinctive beverages, fizzy and infused with Indian flavors, are gaining attention. Raised in Canada by Indian immigrants, Indiana-based Henderson has brought a refreshing jolt to the beverage market.

You are an electrical engineer by trade. What steered you away from that career path? Did you always want to be an entrepreneur?

By trade, I’m an electrical engineer and worked in Corporate America for seven years. After having kids, I knew they were going to be my number one priority, so I retired from engineering and was blessed to stay at home to raise my kids. I wanted to be present for them, enjoy the big and small moments and to see all of their firsts! It was important that they knew that I would always be a constant in their lives. I have four children very close in ages and so when my youngest turned nine, I felt it was a good time to start my entrepreneurial journey. The beverage category has been lacking South Asian representation, so I saw a space for our Indianinspired sparkling beverages. This is how Bollygood became an idea. I created a flavorful Indian beverage that will transport your tastebuds to India!

The name Bollygood has a jaunty ring to it. Who came up with the moniker?

We love the beautiful, charismatic style and spirit of the Indian film industry—Bollywood. So, we made a play on the name and came up with Bollygood. That’s also why on the label you see some dancers as you would see in a musical scene in a Bollywood movie . . . Bharatanatyam was also a part of my childhood. The “good” stands for good beverages with good ingredients and nothing artificial.

Lemons, limes, ginger, mint, basil, cumin, turmeric, and Himalayan pink salt are your primary ingredients. Are there any other traditional ingredients—like cardamom and khus for example— that you might incorporate and perhaps introduce more flavors in the future?

We have two skus, Lemon Ginger Mint and Lime Basil Cumin. We are in the process of formulating two more skus and haven’t finalized anything yet, but you are in the right area of future ingredients. We are a colorful brand. We love representing the rich heritage and vibrant sari and spice colors of India. Our flavors are made with that in mind, bringing beautiful colors to our beverages.

Would you consider infusing ingredients like lemongrass and rosemary that are not typically found in an Indian masalas tableau?

All herbs and spices are on the table! We haven’t used grasses yet, but that’s an interesting thought with the lemongrass or khus. We are all about creating a healthier beverage experience that also tastes great, so we are open to playing with all kinds of ingredients until we find a great drink.

One can order cases of Bollygood directly from your website or via Amazon. When will Bollygood be available at Indian stores? Have you reached out to chains like Whole Foods, Trader Joe’s, Sprouts, Good Harvest, etc.? If so, how was Bollygood received?

We have been focused on e-commerce since we launched. But now we are ready to grow deeper into restaurants and brick and mortar stores. We now have a distributor in Florida, and another may be coming on board in New York/New Jersey. We have reached out to some of the chains mentioned above as well as Patel Brothers. It’s challenging to get into those retailers, but we are working on it. We’ve had some good feedback from retailers, but they all say different things. Surprisingly one of the healthier retailers you mentioned told us they prefer more sugar in it! Another mentioned placing us in the ethnic aisle, but we really believe we are bigger than that aisle. Another said they had too many sparkling drinks, to which we say, “but none like Bollygood!”

Bollygood has been embraced by the Indian community, but we are seeing that it is being well received by non-Indians as well. When we are discovered, customers are excited and enjoy us. We are representing a market that has been underserved for some time. Those looking for an Indian meal can now complete their transportive experience to India with Bollygood.

Your husband, Alan Henderson, is a former NBA player and an entrepreneur in the spirits arena. What are some of your favorite Bollygood based cocktails? Do you give the cocktails fun names as well?

Yes, my husband has a company called Henderson Spirits Group (HSG). His spirits are distributed in seven states now and shipped to over 30 states. He started before me, so he helps me on the operations side. He’s really been able to grow his business. His brands are Birdie Brown and Tom Bullock’s. And he even has his Tom Bullock’s in all the Sam’s Clubs in Florida, Kentucky, Indiana, and soon Georgia.

You highlight the fact that Bollygood is a female, minorityowned business. Why are those categories important to you?

Being a certified women-owned company (WBENC) and certified minority-owned company (NMSDC) is very important to me. Both offer support, education, and can make it easier to access many retailers. Unfortunately, some companies claim they are women-owned or minority-owned and are not. It is like anything, especially in the current social climate, if someone thinks they can get an edge from it they may just try it. But some companies making those claims are really not women or minority owned. Having these certifications, and going through the intense vetting process, Bollygood gives confidence to consumers that really value that diversity in their purchasing decisions. I’m looking forward to Bollygood’s success so that I can stand by my mission to support and empower women and women-owned businesses in the U.S. and India. I hope to encourage other women and women of color to go after their dreams as well!

What are the challenges of being a female, minority entrepreneur?

I am new to the world of entrepreneurship where I am constantly learning and growing. It is not a career I was trained in. I don’t have any mentors that look like me that I can ask for advice. But I do have to mention that I’m not new to being the only woman of color in the room. I was one of a handful of women and woman of color that graduated from my maledominating engineering class. I know how to face a challenge, and triumph over it.

Author of Kismetwali & Other Stories, Reetika Khanna is an Atlanta-based freelance writer who likes to spotlight people with purpose. She has worked with ELLE as a senior features writer, and as an associate features editor with ELLE DÉCOR, Mumbai. For more, go to ReetikaKhanna.com​