Emory University: Tibetan Artist, Gonkar Gyatso
Concurrent with the exhibit Doorway to an Enlightened World,
the Carlos Museum will exhibit new works by contemporary Tibetan-born British artist Gonkar Gyatso.
One of the few artists from the Tibetan diaspora to gain international recognition, Gyatso’s work mixes Buddhist symbols with the iconography of pop culture, bridging Eastern and Western cultures, while examining the traditions of both in new and engaging ways.
In this exhibition, Gyatso was going to explore the interdependent relationship between the Chinese and Tibetans living in the Tibet Autonomous Region and China. Gyatso’s work for this exhibition would stem from My Identity, a 2003 series of photographs in which the artist explores his personal ideological shifts across the political, social, and national boundaries that constitute “Tibet.”

Now his exhibit is modified:
He explores contemporary Tibetan identity through a series of large-scale photographs depicting members of a single family living in Lhasa. Inspired by the proliferation of photographic media, including fashion photography, Family Album investigates changing representations of Tibetan-ness in an increasingly interconnected, globalized world. Gyatso composes the photographs as a family album, revealing the complex and varied roles of each family member. He examines the ways in which Lhasans’ wardrobes and postures gracefully adapt to professional, familial, religious, and holiday settings. These multiple transformations in outward appearance may also suggest inner states and the shifts between them that Tibetans navigate on a daily basis.

In 2003, Gyatso completed his first series of photographs, My Identity, in which he explored his own personal ideological shifts across the political, social, and national boundaries that constitute Tibet. Family Album is Gyatso’s second major photographic project. The photographs were taken in Lhasa in collaboration with photographer, Zhadui.

He asks, "Is there a common thread that defines a culture’s identity? Or is the true nature of identity a bit ambiguous? Too complex, too personal, too political to really understand or define. I’ve always been interested in the grey areas; where language often seems to fail us. Art has a way of weaving together complex ideas and emotions and presenting them in a relatable way. These photographs are largely based on my family in Lhasa. (Although I hope to eventually include family in Nepal, the United States, the United Kingdom, and Canada.) While the poses of each individual change with each costume, it’s fascinating to notice the subtle shifts in expression and posture that they each take on. Are they based on social constructions of self, a mere simulacrum, or do they come from somewhere deeply authentic? With the help of the Tibetan photographer Zhadui, I hope I was able to capture these subtle psychological shifts. I am interested in how contemporary culture is tightly linked with the fashion and pop culture of China and the West. With these photographs, I hope to challenge stereotypes of what it means to be “Tibetan” and at the same time explore how this portrayal of ourselves affects our own concept of ‘self’. ​

His work has been exhibited in galleries and museums around the world, including the Metropolitan Museum of Art and the Rubin Museum of Art in New York. Gyatso participated in the 53rd Venice Biennale, the 6th Asia Pacific Triennial in Brisbane, and the 17th Sydney Biennale.
Event type Arts and Cultural Events

Gonkar Gyatso in Residence at the Carlos

While in residence at the Carlos, Gonkar Gyatso will set up a studio space on Level Three of the museum where students, faculty, staff, and members of the Atlanta community can come and make tsa tsas, a traditional Buddhist offering made from molded clay. Typically left as offerings in the foothills of the Himalayas, the making and offering of tsa tsas is a practice believed to result in the accumulation of merit and to aid in the removal of obstacles to spiritual practice. At the end of the week, hundreds of these small clay images of Buddhas and other meditational deities will be enshrined in the Baker Woodland behind the Carlos Museum where they will naturally disintegrate over time. Studio Hours: Monday - Friday, 10 am - 6 pm
Monday, September 19
Conversation
7:30 pm, Ackerman Hall, Level Three
Gonkar Gyatso, photographer Zhadui, and Tara Doyle of Emory's Department of Religion in conversation.
Thursday, September 22
Gallery Talk
7:30 pm, Family Album Exhibition, Level Three
Gonkar Gyatso will discuss evolving notions of Tibetan identity through his new series of large-scale photographs depicting members of a single family living in Lhasa. Space is limited so a reservation is required for this program by calling 404 727 4280.
Other programs related to the Family Album exhibition:
Friday, September 16
Lecture
7:30 pm, Ackerman Hall, Level Three
Leigh Miller, Director of Academic Programs and Adjunct Professor of Contemporary Buddhism at Maitripa College, discusses the artistic processes of contemporary Tibetan artists using photography to explore mythological and political representations of "Tibetan-ness" in a lecture titledPhotography in Contemporary Tibetan Art: Method, Memory, and Modernity.
Wednesday, September 28
Lecture
7:30 pm, Ackerman Hall, Level Three
In the Western world, buddhas and bodhisattvas are frequently used as carriers for advertising luxury goods, as objets d’art, and as body ornaments. In a lecture titled Buddha in a Shopping Bag, Martin Brauen, chief curator emeritus at the Rubin Museum of Art, explores such uses of sacred Buddhist images and ways in which contemporary artists are depicting and transforming Buddhist symbols. 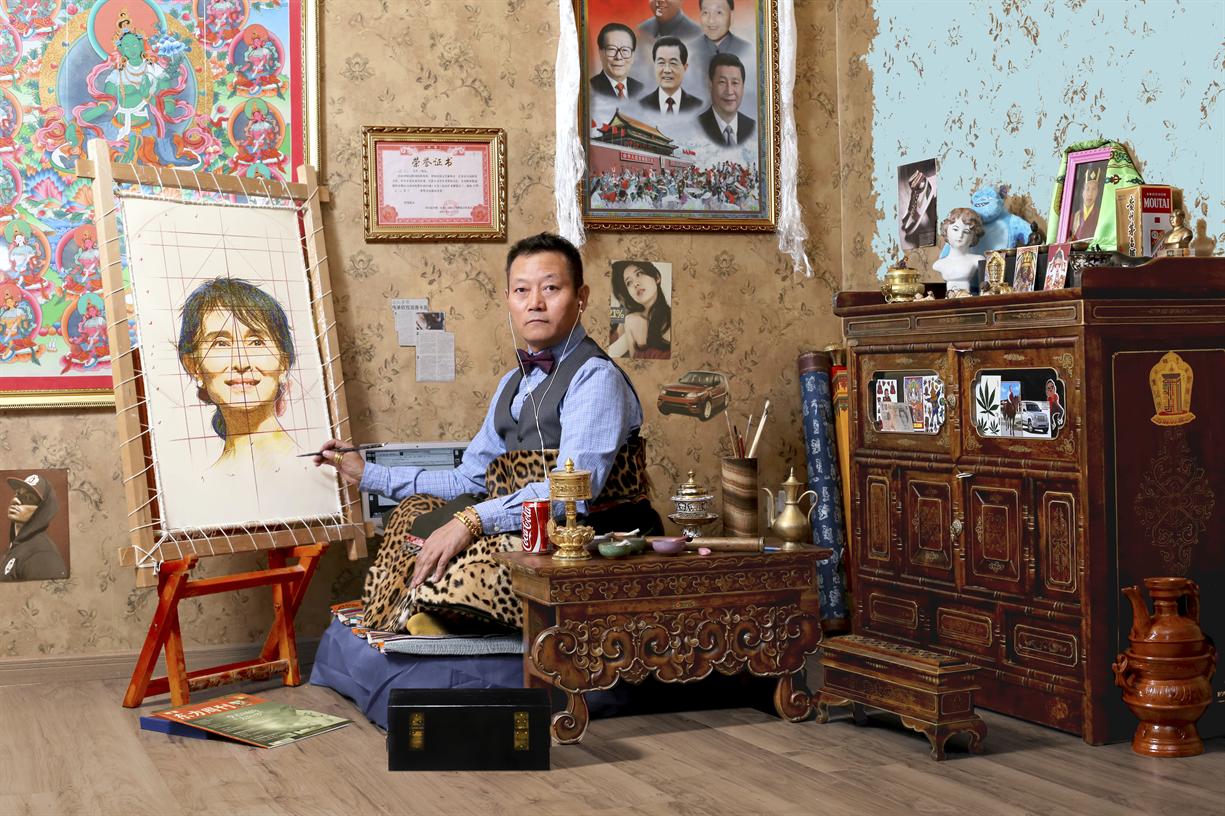