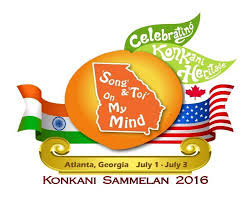 We will open the Sammelan on Friday at 6:00 pm with some cultural programs. The much anticipated Opening ceremony will be on Saturday at 9:00am. Please plan to arrive early to give yourself enough time to register and get familiar with the venue. We plan to open the registration desk as early as 2:00 pm on Friday and at 8:00 am on Saturday. If you are early riser, attend one of our Yoga sessions and head for some delicious Amchi breakfast starting around 7:00 am. Lunch will be served starting 12:15pm and dinner starting around 7:30 pm. We have planned the Closing ceremony on Sunday at 7:00 pm. It will be followed by a banquet style dinner. Please view our program schedule page for the detail schedule. We also recommend all our attendees to download the Sammelan App on their cell phone to get the schedule on their phone and set favorites and reminders.

The Konkani Sammelan (KS) is a flagship event for the Konkanis in North America. This event has attracted Konkanis from all across the United States and Canada. The two-and-half day event highlights sumptuous Konkani food, entertainment, seminars, workshops, and much more. Konkani Sammelans have been a toast of our community.

Initiated in 1996, these Sammelans have been a success right from the beginning. What started out as "Kindling the Konkani Spirit" in New Jersey in 1996 grew up as "Nurturing Konkani Culture" in California in 1998. The Millennium Sammelan in 2000 in Chicago boosted the Konkani spirits high by “Promoting Konkani Heritage." The 2002 Konkani Sammelan in Houston made us all "Proud to be Konkanis." The 2004 Konkani Sammelan in Southern California certainly did a marvelous job in “Preserving Our Heritage & Promoting Our Youth.” The 2006 Canadian Sammelan helped us in “Remembering Our Past & Looking To Our Future.” The 2008 Sammelan in Santa Clara helped “Awaken the Konkani in us All,” The theme for the 2012 Sammelan in Edison, was “CONNECTING KONKANIS, HEART TO HEART, HOME AWAY FROM HOME.” The theme for 2016 Sammelan in Atlanta GA will be "Celebrating Konkani Heritage - Song and Toi on my Mind".

The first Konkani Sammelan was held in 1996 in the state of New Jersey. It was an earnest endeavor by the original Konkani migrants, to facilitate the inter-mingling of Konkanis in the North American Region. Under the able leadership and foresight of its founding members, a not-for-profit organization, NAKA (North American Konkani Association) was formed soon after the first Sammelan. Since then, the Sammelans have been held across various locations in North America such as Chicago, Houston, Los Angeles, San Francisco, Toronto and New Jersey. The number of attendees has increased progressively along with the steadily growing numbers of the Konkani diaspora in North Americas. The first Konkani Sammelan in 1996 was host to 400 attendees vis-a-vis 1800 delegates attended the 2012 Sammelan. We expect around the same number to attend the 2016 Sammelan in Atlanta GA.

All these Sammelans have fulfilled the goal of preserving the Konkani heritage and communicating its value to the younger generation. The Konkani youth have risen up to this challenge. The bond that has developed through these gatherings is everlasting. These Sammelans have given Konkanis a rare opportunity to reunite, learn from each other, discuss issues of common interest, and launch new friendships.