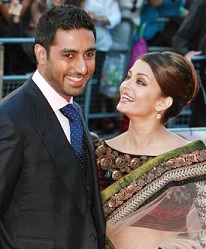 It was Ash versus Deepika at Cannes

Aishwarya Rai Bachchan has done it. She finally wore a sari at Cannes this year, something that everyone has wanted to see her dressed in at the French Riviera. The actress attended the premiere of Outrage with hubby Abhishek by her side, looking gorgeous in a green embellished sari. But it was Deepika Padukone who actually stole the show by donning a sari on her very first outing at Cannes. The Om Shanti Om girl was lavished with praise for her traditional, elegant and classy look. However, the surprising bit is that Mallika Sherawat beat both Ash and Deepika to make it to the list of the best-dressed celebrities at Cannes in a survey done by a fashion website. The actress was there for the promotion of Hisss.

Incidentally, the buzz is that Ash, Deepika and Mallika refused to be seen or photographed with each other.


Salman Khan takes on Big B

After Shah Rukh Khan, the temperamental Salman Khan has now crossed swords with Amitabh Bachchan. Amitabh’s absence at the International Indian Film Academy (IIFA) awards provoked Sallu to take a dig at Big B, saying that as IIFA’s brand ambassador, the senior actor should have been there. The comment sent shockwaves in the industry.

Many Bollywood superstars who normally make a beeline for the IIFA awards, gave it a miss this year when it kicked off in Colombo on June 3. Reason: The Tamil groups and the Indian southern film industry called for a boycott of the event in protest against the alleged human rights violations by the Sri Lankan government.

The entire Bachchan clan chose not to attend the extravaganza. The other notable absentees were Shah Rukh Khan, Ranbir Kapoor, Priyanka Chopra, Imran Khan and Deepika Padukone. However, amongst those who ignored the boycott call and walked down the green carpet at the three-day gala were Salman, Dia Mirza, Kareena Kapoor, Saif Ali Khan, Bipasha Basu, and Lara Dutta along with beau Mahesh Bhupathi.

There’s a new friendship that’s making news in Bollywood. Yes, Shah Rukh Khan and Akshay Kumar are the latest buddies in tinsel town. Apparently, SRK liked Housefull, especially Akshay’s performance in it, so much that he sent Akki a congratulatory message. He also gifted him an expensive watch. As a reciprocal gesture, Akshay sent across an even more expensive watch to Shah Rukh. Not so long ago, Akshay had given health tips to Shah Rukh, especially regarding his chronic back problem.

SRK was said to be extremely miffed when his close friend Farah Khan signed Akshay for Tees Maar Khan, but going by this recent gift-exchanging spree, it seems all is well now!


Are Sushmita Sen and Wasim Akram a couple?

The buzz is that there’s a new man in Sushmita Sen’s life, and he is none other than the former Pakistani cricket captain Wasim Akram. Though the two have denied this, the fact is that they have been spotted together too many times in Mumbai for anyone to be imagining things. Sush and Wasim first hit it off when they were both judges on a television show, but at that time Wasim was happily married to Huma and Sushmita was involved with Muddasar Aziz. Apparently, the couple came closer a few months after Huma succumbed to cancer last year.

Incidentally, after adopting two girls, Sushmita is now ready to have a child of her own. “My biological clock is ticking away,” the actress has been quoted as saying. But question her about marriage and the spunky lady retorts, “Who said anything about marriage?”