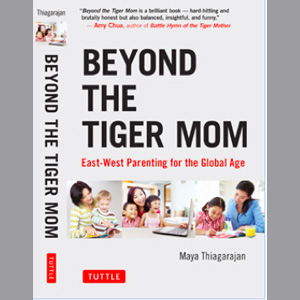 The cultural differences between East and West are strikingly apparent in how children are brought up and what they learn in school, something all immigrant communities are familiar with. For parents who grew up in one culture, dealing with unfamiliar systems and radically different values in another part of the world can be stressful and hard to accept. In a globalizing world, can we find a middle path that embraces the best of East and West?

After teaching at top high schools in the U.S. for a decade, I thought I knew everything there was to know about teaching, education, and parenting.

But then in 2010, I moved to Singapore, and my education-world turned upside down.

Teaching in Asia is a different ball game altogether, mostly because the parents here seem to view education and childhood very differently from that of their American counterparts. Given my own desi roots—I moved from India to the US as a teenager—this shouldn’t have come as such a surprise. But I had lived in the U.S. for fifteen years, taught at American high schools for a decade, and given birth to both my children there; in the process, I had thoroughly absorbed American ideas about education and parenting, and I had begun to believe that those ideas were universal.

At my first set of parent-teacher conferences in Singapore, one Indian mother told me that I needed to be stricter with her son. “He needs to take his studies much more seriously,” she said solemnly. I had thought her son was doing just fine, but she clearly thought he could do much better. A Chinese mother, whose English was not very good, proceeded to thank me profusely for teaching her son. These interactions were markedly different from the ones that I’d had in the U.S.

Over time, as my interactions deepened with local Singaporeans and Asian expats, my fascination grew with how these families viewed childhood, parenting, education, and the very purpose of life itself. Their perspectives, varied and so different from mine, got me thinking about a book that would document and analyze these experiences.

For instance, from the early years, Asian schools focus on math learning while American schools lean more towards language and social skills. At home, Asian children imbibe the values of filial piety and respect for elders while their Western counterparts are encouraged to think independently and challenge authority. For decades, these systems and values from opposite sides of the globe have remained mutually exclusive. But does it have to be that way?

My thesis is simple: successful parenting for global parents is not about embracing one culture and rejecting others. Success lies in the straddling of different worlds; global parents need to draw from both Eastern and Western cultures and blend the best of both to raise children who can adjust to an increasingly complex world.

For years, I have explored the stories of a range of families in multicultural Singapore, besides my own experiences as a parent and teacher, and the possibility of adopting a middle path between cultures. Can parents create a home that values both language and math, priming kids for success in both areas? Both reverence/respect and skepticism are valuable; how can we straddle the two and raise kids who are not only independent thinkers but also respectful? How can we get the balance right?

A ‘global’ style of parenting/schooling can be complex and confusing but it offers a great opportunity to learn from different cultures. The challenges are many, but I do believe that our kids can have the best of the East: discipline, concentration, a strong sense of belonging to the family, strong roots in their cultures/communities, a deep belief in the value of learning, a reverence for knowledge, and strong foundations in math and science. But they can also have the best of the West: the Western belief that inquiry, investigation, and exploration are valuable ways to learn as well as the Western emphasis on language, self-expression, self-confidence, and independent thinking.

Maya Thiagarajan is an educator and author. Her book, Beyond The Tiger Mom: East-West Parenting for the Global Age was recently published by Tuttle and is available on Amazon.