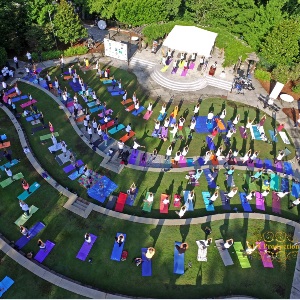 On a cool breezy Sunday morning, June 24, 2018, over 1,000 yoga practitioners and representatives of 50-some community organizations were in Heritage Park, Sandy Springs for the 4th International Day of Yoga (IDY) organized by the Consulate General of India in Atlanta with the City of Sandy Springs. 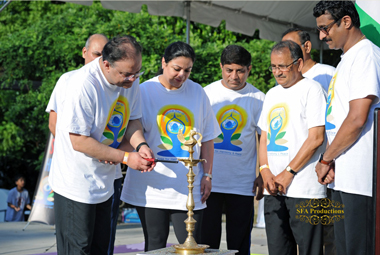 The 7:30 am to 10:30 am event was inaugurated by lighting of the diya (lamp) by Consul General Nagesh Singh, Pragjna Singh, Consul Shailesh Lakhtakia, and core team members Rajan Vedak, Viral Trivedi, and Rajiv Menon. Founding member of idyatlanta.org, Ajay Houde, welcomed all, saying that “The IDY has been unanimously supported by 170 nations and is being celebrated globally.” He requested anyone seeking medical help to contact Dr. Nadig and Trushna Rao at the medical safety booth, as attendees included the physically challenged as well as children and people of various nationalities.

Consul Lakhtakia declared that the gathering had maximum participation in the region. “Ever since the UN voted with 170 members cosponsoring 21st June as International Day of Yoga, this event has been going on from strength to strength. We welcome the participation of our younger generation because we feel that they should develop positivity, have good mind and body, and move on in life.”

In a video message, India’s Prime Minister Narendra Modi hailed yoga as one of the most precious gifts given by the ancient sages to humankind. ”It is said in the Gita that yoga is a state of equilibrium and equanimity. Yoga is not just a set of exercises that keeps the body fit…. Free from illness, a path to wellness, that is the path of yoga because it teaches us to see others as the same as ourselves. When we understand ourselves, we become ready to form a constructive bond with the society at large, a bond of oneness with our families, with society we live in, with fellow humans, all the birds, animals, bees with whom we share our beautiful planet. Thus yoga is a journey from ‘me’ to ‘we.’

“People suffer from stress-related illnesses and also lifestyle-related diseases like diabetes and hypertension. Stress and depression have become silent killers. Yoga offers a solution to these ailments. Yoga is ideal for relaxation. In a distracted world, yoga helps focus.

“I am happy that the popularity of yoga is on the rise globally. With more people embracing yoga, the demand for yoga teachers is also rising. Our next challenge is to produce institutionally trained yoga teachers, standard yoga system, teachers who can ignite the strength further, especially among the youth. I wish you all happy yoga practicing.”

Nagesh Singh noted, “When Our Prime Minister initiated this whole exercise in 2014 saying that there should be a day to commemorate yoga throughout the world, the idea was to spread the message of yoga…. Yoga is a kind of exercise which takes care of the body, mind, and your spirituality, and generally promotes peace in individual and across nations and countries, and that is why this year’s theme back in India is ‘Yoga for Peace.’ … It does not belong only to India but to the entire world and human civilization.... This has truly become a ‘people’s event’ and thanks again to all who have worked hard for the past several months to ensure that this andolan (movement) will carry on.”

The program was emceed with vivacity and in a relaxed manner by Vandana Aggarwal, a GA Tech graduate and a registered yoga teacher, and Archith Seshadri, also a GA Tech. graduate and a recent anchor at ZeeTV in New Delhi, who has anchored with CNN, ABC, and Fox news channels in the past.

Following the chanting of the Gayatri Mantra, Vandana and Archith, with the help of seasoned yoga volunteers on the stage, took turns to lead the gathering in the common yoga protocol created by the India Government, guiding attendees in performing an array of asanas (postures). With soft music in the background, attendees performed warm-up practices, standing, sitting, prone, and supine asanas; kapalabhati and pranayama (breath altering practices) by Patanjali Yoga Group; dhyana (meditation); and sankalpa (commitment to truth). Hindu Swayamsevak Sangh and Art of Living’s Art Excel students led the gathering in performing ten steps of Surya Namaskar 13 times! 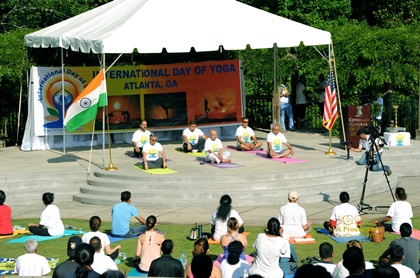 A pleasant treat was provided in the form of Laughing Yoga! Soon the park reverberated with joyous, enthusiastic loud ho ho, ha ha, and ha ha ha ha ha! No doubt this energized all the participants! 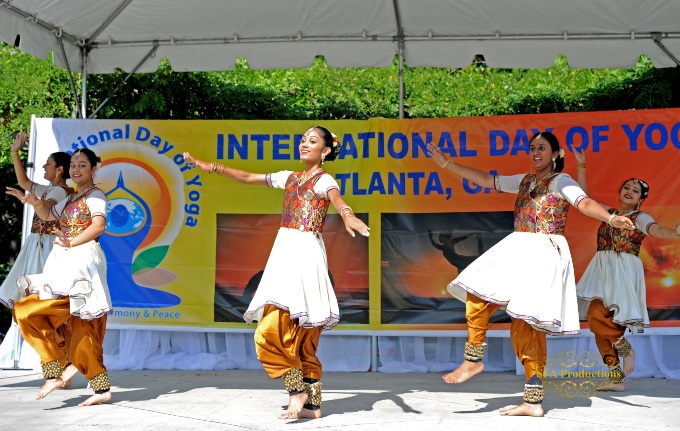 The program concluded with the closing sankalpa by Hindu Swayamsevak Sangh volunteers and shanti mantra by Sadhvi Prempuri.

Thanks
The event was supported by sponsors and contributions by business and professional entities, including House of Spices, Raja Foods, BAJAA, GAPS and Suvidha. More than 100 volunteers including Sudhir Agarwal, Rajan Vedak, Ajay Houde, Rajeev Menon, and Viral Trivedi put in enormous efforts to ensure a flawless and memorable celebration of the 4th IDY.

Heartfulness Institute is a global nonprofit with thousands of volunteer trainers who serve more than a million meditators in over 130 countries. Its mission is to help develop peaceful, healthy, holistic individuals and children, families and communities, organizations and businesses, with a spirit of human well-being and oneness. Their relaxation and meditation techniques are proven to be effective in reducing stress and anxiety, improving sleep, enhancing emotional intelligence, and exploring the heights and depths of human consciousness. Heartfulness is offered free by over 40 trainers all over metro Atlanta. See another Around Town report this month on the Heartfulness Institute's program "Heart Notes."