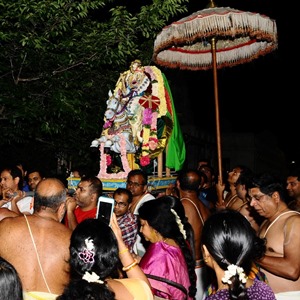 The Hindu Temple of Atlanta, Riverdale celebrated its 27th annual celebrations and 19th Paancharatra Aagama Purvaka Panchaahnika Balaji Brahmotsavam from May 23–29, 2018. The seven-day celebration attracted devotees and tourists not only from all parts of Georgia but also from neighboring states.

The grand celebration or Brahmotsavam is not only a rare and auspicious occasion but also a feast for the eyes. It began with Ankurarpana, Punyahavachanam, Vasudeva Homam, etc., on the early hours of Wednesday, May 23 in the holy presence of Swami Ram Kamal Das Vedanti ji of Varanasi. More than a dozen temple priests led by Sri Gopal Bhattar performed elaborate rituals such as Durga Deepa Puja during the festival. 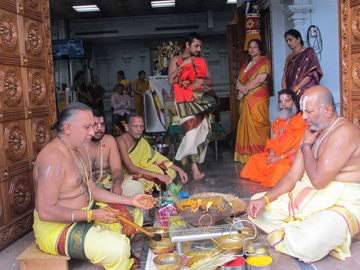 On the first day, after Ankurarpana, a flag bearing the emblem of Garuda, vehicle of Vishnu, was hoisted amid rituals, Vedic chanting by the temple priests, and Mangala vayadyam (played with musical instruments). This signaled the start of Brahmotsavam. It is believed that Garuda goes to Devalokam and invites the devas to attend the celebration.

Spiritual discourses and cultural programs were enjoyed. Every day, utsava murtis were adorned in various special alamkaras and taken in procession around the temple (prakarotsavam) on different vahanas such as Hamsa Vahana, Gaja Vahana, Vrishabha Vahana, Ashwa Vahana, etc., once in the morning and once in the evening. Utsava murtis were taken around the temple in a uniquely decorated chariot (Grand Ratha Yatra) on Saturday, May 26. 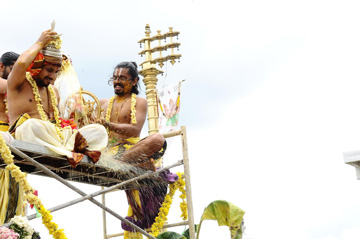 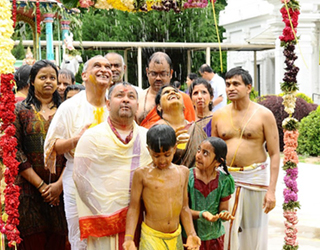 (Below) Chakra Snanam: liquid falling on devotees below. (Photo: Bala)

The concluding day of Brahmotsavam on Sunday, May 27, was celebrated in a grand way with Avabhritha Utsava (special abhishekams for the utsava murti). The Sudarsana Chakra was bathed and placed on a high platform so that devotees could walk under it and be blessed by the water dripping down from it.

Visesha Sayanotsavam was held on Sunday, May 27, and Maha Satyanarayana Puja on Monday, May 28. Mahanyasa Purvaka Ekadasa Rudrabhishekam was performed grandly under the guidance of Srinivasa Sarma of Siva temple on Tuesday, May 29, on the eve of Siva temple’s 13th pratishtha day.

Noted Harikatha artist, Smt. Jayanthi Savithri of Tirumala Tirupati Devasthanams, India gave a Harikatha performance on “Gajendra Mokshanam.” Harikatha, a form of Hindu religious discourse has become popular in other languages, too. It is an art form composed of storytelling, poetry, music, drama, dance, and philosophy; it was a popular form of entertainment, transmitting cultural, educational, and religious values to the community.

The HTA dress code was strictly implemented. Devotees who came with shorts, athletic gear, torn jeans, or dresses shorter than knee length were promptly given Indian clothing to enter shrines of the temple. Food (maha prasad) was given to all devotees free of cost.

Trustees, executive committee members, and devout volunteers under the guidance of Smt. Kusuma Kotte, President of the temple, and Smt. Phani Tummala, Puja Committee chair, made excellent arrangements for the celebrations. Thousands of devotees were able to attend and offer prayers.