“Aham Sita” – Sita speaks for herself! 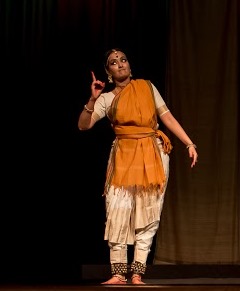 On April 24, 2016, Natya Dhaara hosted a guest performance of an unconventional dance drama at Mountain View High School in Lawrenceville, Georgia. In Hindu mythology, the epic story of the Ramayana is about Rama and Sita. A good man called Rama marries a beautiful princess called Sita. They are banished to live in the forest with his brother Lakshman, by his stepmother, because she wants her son to be king. Then Ravana, the demon King hears of Sita’s beauty, disguises himself as an old man and kidnaps her. He takes her to his island Lanka. Rama and Lakshman prepare to rescue Sita, so they ask Hanuman for help. Hanuman, the king of the monkey army, could fly, so he finds her. Ravana is killed in the epic battle.

The play “Aham Sita” or “I am Sita” is a reinterpretation of this story from the point of view of the women of the Ramayana. The soliloquies by script writer and director, Gowri Ramnarayan, are a great mix of poetry, dance, and music, and confront issues affecting Indian women. The sophistication of classical music has a scale of beautiful quarter tones. Gowri is wordsmith of the play, and Vidhya Subramanian’s dance gives the story its emotive exuberance.

The first act is Sita. She is a pampered girl who falls in love with Rama. When Rama, who later becomes King of Ayodya, goes into exile, she is portrayed as a wife who questions her husband and follows him to exile, an unexpectedly bold move by a traditional wife. Then, after being kidnapped by Ravana, Rama questions her fidelity. Sita is heartbroken when Rama questions her chastity. To make matters worse, he sends Sita into exile with his sons because he does not believe he is their father. When Rama needs an heir, he asks Sita to come back with his sons.

Then it’s the turn of Urmila, Sita’s younger sister. Urmila is the biological daughter of King Janaka of Mithila, but Sita, who is adopted by King Janaka, is his favorite child. Urmila is in the shadow of Sita and marries the younger brother of Rama. She ends up looking after Sita’s in-laws while Rama, Sita, and her husband, Lakshman are in exile. Urmila loses her world to Sita. Ahyla is the next woman in the play. Ahyla is accused by her husband, Rishi Gotama, for being unfaithful to him. But in fact, the king of the Devas, Indra, is in love with Ahyla. He seduces her by taking the form of Ahyla’s husband, Rishi Gotama. Rishi Gotama gets mad and turns her into a stone. Later, King Rama shows her mercy and brings her back into human form. Rama is able to forgive Ahyla but cannot show his wife Sita mercy.

Shoorpanakha, the evil sister of demon King Ravana, takes center stage. She tries to seduce Rama, but he is angered by her boldness and disfigures her. One of the script lines says, “you would not have done this to your own kind,” showing dislike between people of North and South. Shoorpanakha is portrayed as the woman from the South with pot belly, dark skin, and big hair, all of which is seen as unattractive in India. She is promiscuous and, unlike Sita, considers herself equal to men. 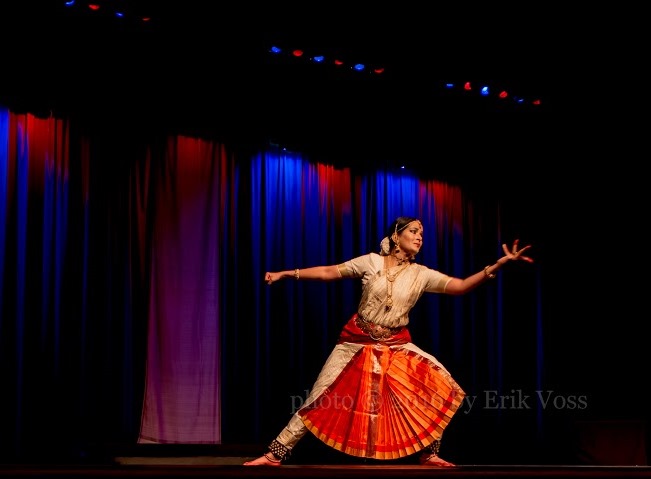 Mandodari, one of Ravana’s wives, enters the stage. She is a desolate widow as her husband is killed in the battle. He had promised to love her the most, but kidnapped Sita because of her beauty. She warns her husband to return Sita, because Sita is like “a jewel on the head of a snake,” but Ravana does not listen to his wife and loses his life in the battle.

Sita then returns on stage to turn a cold shoulder towards King Rama’s request for her to return to Ayodya. The classical dance to this part of the character by Vidya Subramanian is fierce and dramatic. 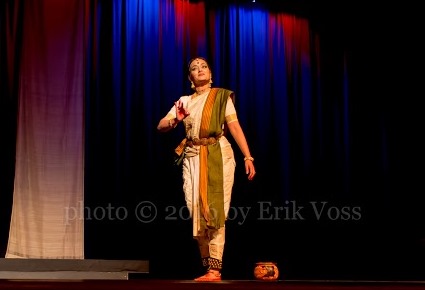 Gowri Ramnarayan and Vidhya Subramanian return to the stage together and play out a scene where across the river a new rajya (world) is awaiting with freedom for women.