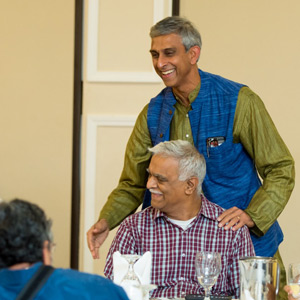 The All India Movement for Seva held its annual gala fundraiser in Atlanta with entertainment from the nationally known comedian, Rajiv Satyal, on November 18, 2016. The event at Ashiana Banquet Hall in Global Mall attracted 160 attendees. The goal is to support 3 chatralayas (Free Student Homes, FSH, educational residential facilities for India’s underprivileged school children) in Gujarat, Andhra Pradesh, and Tamil Nadu, which have 100 children, at a cost/child/year of $450 or $40/month. The event raised funds for about 65 children, so the drive continues through the end of the year. 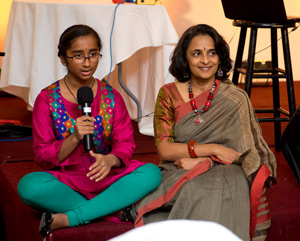 The AIM for Seva Atlanta chapter has helped 100 students in India and wants to help more children. “Fundraisers like the annual gala dinner help to raise funds towards our $50,000 goal this year,” said Atlanta Coordinator Eashwar Money.


The gala kicked off the evening with Ashiana restaurant-catered appetizers including Gujarat dishes bhel, samosas, and pakoras. There were music performances emceed by local favorite, Mr. S. V. Krishnan who did crowd polling to sing a Bollywood favorite that had the crowd clapping and humming along. Dr. Sam Kini sang an old Bollywood song which he introduced “as a ballad that wishes limitless opportunity, that’s sung by a father to his young children—and essentially isn’t that what we all wish for as we raise money to educate India’s young kids.”

Eashwar Money and Nithya Narasimhan, another Atlanta Coordinator, spoke during a slideshow about the ways people can contribute to help “bridge the cultural, economic, and social divide between India’s urban and rural areas.” These include scholarships, hosting a classroom in a school, and building an FSH in your chosen location as Venkat Shankar did in Tamil Nadu, India. Shankar spoke eloquently about the extraordinary reason about opening a school that houses 35 children: it was his only child’s dying wish. Shankar did all that was possible to save his only child, diagnosed with terminal cancer, but when it seemed that time was running out, his son asked him to “help India’s poor kids—give your money to those who can really use it.” It was a tangible reason to “look beyond the dollar because you are giving a child a future,” Shankar said, and he implored the audience to give “from the heart, not just the wallet.” 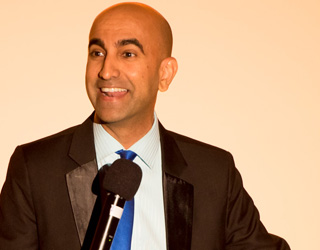 After dinner, comedian Rajiv Satyal with his unique blend of comedy took center stage for 45 minutes of hilarious entertainment. After the show Satyal said he wrote the jokes for the Indian audience. If a fundraising evening ends with audiences exiting with smiles, then Satyal delivered wining results.

Started in 2000, Aim for Seva now has more than 97 chatralayas in 16 Indian states benefiting over 14,000 students. The FSH, described as a living ecosystem, provides a safe haven for children as they attend a nearby government school and also receive a holistic education including training in music, health, gardening, nutrition, and yoga.