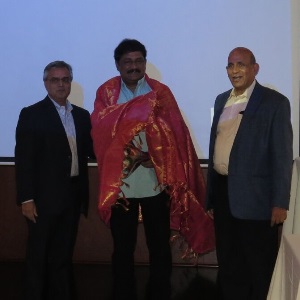 Heartfulness (Meditation) Institute, a global organization with over 5000 “Heartspots” in approximately 130 countries, and whose roots are in Hyderabad, Andhra Pradesh (AP), sponsored the visit of the Hon. Minister for Education & Industry, Ganta Srinivas Rao, to Atlanta with a small but vibrant group of guests at the Affairs Restaurant in Cummings, Georgia. Already famous as the game changer of Indian politics, the longest-seeded Chief Minister of AP, Hon. Chandrababu Naidu has formed an incredible team of worker bees, bringing about a wholesome change in their individual portfolios, and one among them is Minister Ganta Rao.

During his visit, Minister Rao met with John Kasich, governor of Ohio, and signed a first ever MoU (memorandum of understanding) of its kind with President Cheryl Schrader of Wright State University, which will give fee concessions to students from AP, in the undergraduate, postgraduate, and PhD courses, effective as early as January 1, 2018. No small feat this! It’s the first time that international students will avail of in-state tuition fee rates, which will bring tremendous savings to students from AP: undergraduates will pay $5,400 instead of $8,864 and postgraduate students will pay $8,052 instead of $11,889.

Scouting for compelling industry partners who are willing to invest in AP and enable infrastructural changes, he has initiated conversations and let the doors open for the potentials to visit AP later this year, when AP hosts a very large global conference.

Consul General Nagesh Singh speaking at the brunch for the visiting minister from Andhra Pradesh.

Arriving late with his team, due to flight delays on Friday October 27, Minister Rao lost no time is meeting a few individuals and then attended the scheduled brunch meeting at Affairs on Saturday morning. The sporty gathering included Indian-American technocrats, young & veteran start-up leaders, as well as nonprofit champions, and the media. Consul General Nagesh Singh was invited to speak and lamented the fact that most elected leaders visit either the Northeast or Western corridor of the United States due to the previously established successes. He elaborated on the Southeast’s emergence as a new leader of industry and trade with rich assets, and on its nationally rated schools such as Georgia Institute of Technology and Emory, which are excellent for scientific research and industry innovation. He spoke of the Georgia economy being diverse and robust. A skilled workforce is created by Georgia State University, the University of Georgia, and private schools such as Mercer University, as well as universities in Alabama, Mississippi, Tennessee, and the Carolinas. Atlanta is an expanding home of several Fortune 500 companies, responsible for its thriving Indian diaspora. He emphasized the need for elected Indian officials to make Atlanta a mandatory stop during their U.S. travels, should they be interested in partnering with a young, energetic, and successfully vibrant business community.

Minister Ganta Srinivas Rao spoke very briefly from his seat. He was happy to see a strong representation of the business and education communities. He thanked the organizer, Sanjay Sehgal of Heartfull and, who is a serial entrepreneur and current CEO of MSys Technologies, for bringing such a passionate group of individuals together. Minister Rao was honored by CEO Madhava Reddy of HTC Global Software from Detroit, along with Sanjay Sehgal, by being draped on the shoulders with a traditional shawl, before the Minister left for a short meeting and to later proceed with his afternoon flight out. Dr. Krishna Linga, CEO of Inphot Inc from New Jersey, draped Nagesh Singh with a shawl to the warm appreciation of the guests.

Upon Minister Rao’s departure, Dr. Venkat Edara, Advisor to Hon. Chandrababu Naidu, Chief Minister of AP, gave a presentation on how Mr. Naidu wants to make AP a model state in the next few years. While highlighting the innovative approach of the AP Government in attracting various businesses as well as education initiatives, he said, "We recently partnered with Heartfulness Institute, a nonprofit education and wellness organization, which is offering heart-based meditation practices and a values-based education curriculum. This is a much needed balance of creating stronger minds for a better future. They are training our teachers who will then be able to deal with the children in a more creative and empathetic manner." This, he said, will lay the foundation for a better future. The AP Government has numerous initiatives and incentives to attract talents and contribution of NRIs from the USA. Dr. Edara, having been associated with the Atlanta Indian and Telugu community, has a special attachment to Atlanta. He emphasized that "As we [NRI’s] become successful, we are eager to serve our mother land. And if you want to contribute to the growth and expansion of AP there is no better time than now." He went on to add "These incentives of land grants, for example, may not last forever. Hence if you are interested, reach out to us and take advantage of this unique opportunity.”

The delegation from AP appreciated the work being done by Heartfulness Institute, which has existed since 1945 and is based on Raja Yoga Meditation and Sahaj Marg System of Meditation, and expressed interest in its setting up a holistic Mind-Body University to produce next generation leaders, who are empathetic and effective, compassionate and confident, successful and responsible. In closing, Mr. Victor Kannan, Director of Heartfulness Institute, thanked Mr. Nagesh Singh and all the other business and education leaders who participated in the deliberation. He also spoke about the vital need to cultivate heart based decision making to balance success with happiness. Many business leaders expressed their eagerness to contribute. Echoing everyone's sentiments, Dr. Poondi Narasimhan suggested to incorporate meditation in our lives and businesses to feel whole, whilst Dr. Govind Hariharan of Kennesaw State University said "Count me in. Let me know how I can contribute." Heartfulness Institute has promised to host another gathering of business, education, and healthcare leaders shortly.