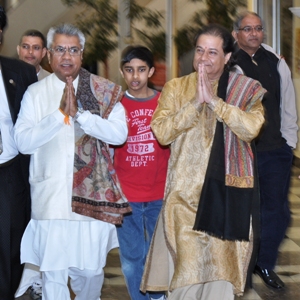 Anup Jalota and Sri. Chamunda Swami were greeted with a standing ovation as they entered the hall. Subash Razdan introduced them, recalling that as President of India American Cultural Association (IACA) in 1987, he had the honor and privilege to organize Jalota’s first concert in Atlanta at the Civic Center—and IACA was able to pay off its mortgage loan from the concert’s surplus funds. Jalota “is not only a ‘Bhajan and Ghazal Samrat’ but also a cultural ambassador.” Born in Nainital, Uttarakhand to a renowned exponent of bhajan, he hails from the Sham Chowrasi Gharana of Punjab. Educated in Lucknow, he began his musical career as a chorus singer in All India Radio. His popular bhajans include “Main Nahi Makhan Khayo, ” and “Rang De Chunariya.” Jalota was bestowed the Padma Shri Award in 2012.

Introducing Sri Chamunda Swami, Razdan said that in addition to his spiritual talks on Zee TV and Starplus TV, he offers personalized services at his Healing Center in Hicksville, New York. He stresses the daily processes of focusing on positive thoughts through meditation and sustaining body wellness through Ayurvedic principles. He recommends noting stress in a diary to become aware, taking charge of environment, schedule, emotions, thoughts, and ways of dealing with outside pressure.

Shyam Garg, president of Sonal Furniture stores in Global Mall and Macon, welcomed them as 'Bhajan and Ghazal Samrat' and 'Maa Bhagwati Samrat.' 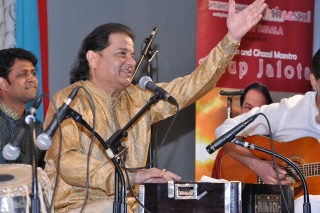 Jalota introduced his troupe: long-time friend and accompanist Ramesh Kumar (tabla), Bobby Rozario (guitar), Rakesh Bandopadya (octopad), and Amjad Kava (supporting tabla-player). He began with one of his most popular bhajans “Aisi lagi lagan,” and then paid a glowing tribute to the prominent Indian ghazal singer, late Jagjit Singh: “Many singers will come and go but none like him,” he said, and he sang “Tum Itna Jo Muskura Rahe Ho.” He struck an immediate rapport with the audience, at times singing one line and inviting the audience to sing the second, sometimes a few words. He brought the house down with the rousing song “Laal Meri Pat.” The audience clapped loudly, whistled, and sang in unison. He continued the tempo with his bhajan “Tere Man Mein Ram Tan Mein Ram.” He sang the same lines in different ragas raising and lowering his pitch. He quipped occasionally and was in a totally relaxed and jovial mood, even singing “Kolaveri Di, Why This Kolaveri.” Occasionally he interwove lines of different songs without affecting the flow. 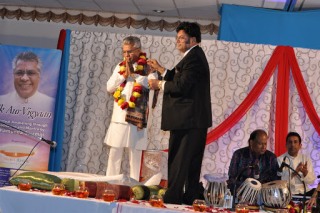 Chamunda Swami spoke in Hindi, lauding Jalota, one of his close friends, saying that Jalota is blessed by goddess Saraswati. Music is the best way to attain bliss. He advised the audience to give up negative thoughts, focus on the positive, and give unconditional love to family and people who count on you. You can reach God only through love. He urged them to follow the path of truth and honesty and live a contented life. Astrology is a useful science which can guide us, he said, but believe in yourself—with good deeds you can change your fate. Stressful living causes physical and mental problems, so form a habit of a daily brief meditation (about half an hour) to reduce stress and attain inner peace. Beej Mantra recited several times a day helps will power through Ajna Chakra (the 6th chakra, Third Eye, most powerful of seven chakras); focus on one’s chosen god or goddess during meditation, or when offering prayers. He also gave another mantra for bedtime and demonstrated Pankh Mudra (gently placing both palms to cover the closed eyes and focusing on Ajna Chakra). During his question-and-answer session he also touched upon Kundalini.

Jalota talked about his upcoming albums: Destiny and We love you, Jagjit. Bhagawad Gita through Hindi songs will also be released.