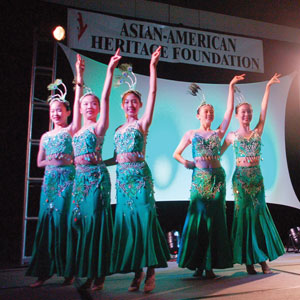 Founded by a group of former commissioners from Georgia Governor Roy Barnes' Commission on Asian-American Affairs, the Asian American Heritage Foundation (AAHF) promotes economic, education and health issues within the Asian-American community in Georgia. It also promotes the recognition and appreciation of the historical contributions made by the citizens of Asian and Pacific heritage in the United States, encourages involvement in community service and the American civil process, and promotes corporate diversity.

The 10th Anniversary Gala program on May 21, 2011 recognized contributions from the Asian Diaspora for Georgia’s growth. Led by President Farooq Soomro and Chairperson Ani Agnihotri, the gala was organized by Board Member Viren Mayani and hosted at the Hyatt Regency, Atlanta. Christopher Horace, AAHF Board Member and Director Global G&A and IT Sourcing, Coca-Cola, reminisced and highlighted AAHF relevance today: in the most recent census Georgia was identified as the 2nd fastest growing state in the nation for Asian minority business growth.

The stage was then lit up with a violin performance by Brianna Godshalk, Ms. Georgia’s Outstanding Teen 2009, who was also the Gala’s co-emcee with Viren Mayani. After thunderous applause Viren introduced Brianna as being half Filipino and a current sophomore at Fordham University in New York City, and she introduced Viren. Both appealed to everyone to open their hearts and purse strings for silent auction items including roundtrip tickets from Air-Tran and more.

John H. Eaves, a Yale alumni and Chairman of the Fulton County Board of Commissioners, presides over 14 municipalities with an annual operating budget of $935M and a population of 1.1M residents. He spoke of the need for diversity in a city like Atlanta.

The Chief Guest for the evening was the recently retired Lt. General Joseph Peterson, the first three star Asian-American General, with Chinese, Japanese and Hawaiian ancestry. He has a BS in Economics and an MBA from Chaminade University in HI. He led Army units in the USA, Germany, Korea, Kuwait and most recently in Iraq. His staff assignments include key positions in the Office of the Joint Chiefs of Staff, the Pentagon, NATO and more. He spoke with humor but recalled the discrimination he was faced with when new to America. He determined to make a difference in this great nation by his actions, thereby changing the rigid perception the Americans had from WWII of Japanese and Asian minorities—and his impact has been significant. A great motivator of people, he also recognized veterans in the audience who had fought, risking their lives to keep ours safe and free to live without fear.

The entertainment included three unique and colorful dance performances by the members of the Atlanta Asia Culture and Art Center as well as the Morningside Academy of Dance; who performed the Tibetan Dance, the Peacock Dance and the Mongolian Dance woven between speeches. Two side screens ran the beautiful scenic highlights of Tibet, China and Mongolia while the dancers swiftly and gracefully performed on the broad stage in their finest costumes.

Crystal awards were presented to Air Tran, Lockheed Martin, The Home Depot and Georgia Power corporations for their support and engagement with the AAHF in promoting diversity in their workplace. Individual Awards were also presented to Lt. General Joseph Peterson and Dr. John Eaves for their service to our great nation, besides GA State Rep. Pedro Martin for his committed service to the Asian Diaspora and Board Member Jeannie Chayavadhanangkur aka Jeannie Chaya for her steadfast commitment and contributions to the AAHF.